Cued up by MSNBC's Keith Olbermann on Tuesday's Countdown, Al Franken repeated the same “joke” he told on Letterman and the Today show about how he's “worried” that “Rove and Libby and others...may be executed." Olbermann then quipped: “But it would be a hell of a story for cable news." To which Franken chipped in to laughter from Olbermann: "It would. Especially if it got to the President and the Vice President because, and I think there should be a constitutional amendment passed as soon as possible that we can't execute either a sitting or recently-impeached President and Vice President." Olbermann picked up on a Monday NewsBusters item by Dave Pierre which highlighted how “in a 'comedy' skit for a promotional video at Amazon.com, Al Franken knees a self-described 'right-wing jerk' in the groin.” After playing an excerpt from the video, Olbermann didn't mention the name “NewsBusters,” but made his target clear as he denigrated the MRC's President: “One of the blogs affiliated with noted media watcher Brent Bozell, or as he's sometimes known, 'Red Beard the Pirate,' asks, 'Is there a theme of violence in Al Franken's work?'"

In its zeal to promote the “right” kind of candidates, the Associated Press put out a piece called, “Death Penalty, Bush Loom in Va.

[An update to my colleague Tim Graham's posts on Good Night and Good Luck co-star and director George Clooney found here and here.]

CBS Early Show host Harry Smith today interviewed George Clooney in the last half hour of the program. At one point Smith---who apparently from the interview really liked the film---notes he saw a screening of the film in New York City, with other journalists and asks Clooney for the reaction he received from his colleagues:

Adage.com has published this article* about the harm caused to the United States by (gasp!) BLOGS!

What Are They Putting In Chris Matthews's Water?

What the heck is a "tangy meringue of maudlin and giddy?" Check out this overwrought introduction from last night's Hardball:

Chris Matthews: "In Washington, where no one`s ever late for a hanging, the sky is grim and cloudy. The mood, a tangy meringue of maudlin and giddy. The President today called the CIA leak probe a very serious investigation, is reported to be cranky and bitter, pointing blame at his top aides and the Vice President who he has reported to have said got too deep into the intel use to sell the Iraq war. Let`s play Hardball."

By Greg Sheffield | October 25, 2005 2:35 PM EDT
Earlier today, CNN.com had a headline on its front page about the 78 percent of Iraqis who voted in support of the constitution. Apparently not wanting to appear pro-Bush, that headline has been removed and replaced with a much more MoveOn-friendly title: U.S. death toll in Iraq hits 2,000.

Currently, nowhere on the front page does it mention the landslide victory in favor of the constitution. 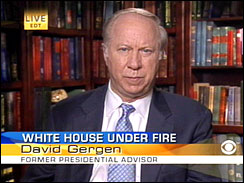 As reported here by NewsBusters, U.S. News and World Report’s editor-at-large David Gergen on CBS’s “Early Show” last Friday made the claim that the Wilson/Plame affair had some similarities to Watergate.

By Greg Sheffield | October 25, 2005 1:07 PM EDT
The Paris-based Reporters Without Borders has produced its annual World Press Freedom Index for 2005.

The Associated Press reports that "European countries lead the world in providing freedoms to news media, while the United States lost ground."

Beginning in the Middle Ages, there was a widely popular puppet show called “Punch and Judy.” Most of its content and humor were based on two characters flailing away at each other with slap sticks. Today, we have a verbal equivalent of the same thing, occurring in the pages of the New York Times. These protagonists are Arthur (“Pinch”) Sulzberger Jr., boy-publisher of the Times, and Judith (“Judy”) Miller, one-time rising star writer for that paper.

Franken's Funny When He Calls for Death, But...

By Rich Noyes | October 25, 2005 12:28 PM EDT
As Geoff Dickens just pointed out, Today’s Matt Lauer just smiled and laughed when left-wing radio host Al Franken predicted the execution of Karl Rove and Lewis Libby. But a few weeks ago when Pat Robertson called for the assassination of Venezuela’s Hugo Chavez, an anti-American dictator who has cozied up with Iran’s ayatollahs and Cuba’s communists, Today was outraged enough to lead the show with Robertson’s supposed transgression.

By Ken Shepherd | October 25, 2005 12:14 PM EDT
The first half-hour of today's Early Show featured a brief anchor read by Hannah Storm on the 1,998th and 1,999th American deaths in Iraq, followed two segments later with a Bill Plante segment on the Valerie Plame leak investigation (sandwiched between was an obituary for civil rights icon Rosa Parks who died yesterday).

On Today, at 8:52am Al Franken was on to promote his new book The Truth and repeated his twisted joke from Friday's Letterman in which he predicted that Rove and Libby will be executed for treason. Franken's "joke," drew laughter from Matt Lauer and the rest of the Today show studio. The following is just a portion of this morning's interview:

Matt Lauer: "All right, Karl Rove and Scooter Libby what’s their future? What’s your prediction in terms of indictments? Yes or no?"

Franken: "Oh they, they’ll be indicted. I, I am absolutely sure and this is about, of course, the war in Iraq really. It’s about the justification for the war and smearing Joe Wilson by outing his wife who’s a CIA agent. George H.W. Bush, the President’s father, said, as, when he was head of the CIA, that outing a CIA agent is treason. I, I agree. So I think that Rove and Libby will be executed." Lauer laughed along with those in the studio.

Brian Maloney at The Radio Equalizer, a leading blogger on the Air America scandal, offered the transcript of the other part of the Letterman segment with Al Franken. Unlike the "mainstream media," Letterman at least asked about the Air America financial scandal.