By BMI Staff | April 19, 2006 2:00 PM EDT
Earth Day Special
The Business & Media Institute wishes everyone a happy Earth Day on April 22. But before you recycle something, check out our new paper-free article on HBOs Too

Why Are We Over a Barrel?

Americans innocent, but guilty from eating

By Ken Shepherd | April 19, 2006 2:00 PM EDT
Journalists continue to pound people about diet, so is it any wonder we dont like food any more?

Too Hot Not to Handle

By R. Warren Anderson | April 19, 2006 2:00 PM EDT
As PBS releases a special about the oil delivery system, the Business & Media Institute goes back in time to recall environmentalists pipe dream: stopping it.

Remember former Time contributor Nina Burleigh? She won our Quote of the Year award in 1998 for proclaiming to the Washington Post: "I would be happy to give him [Clinton] a blow job just to thank him for keeping abortion legal. I think American women should be lining up with their presidential kneepads on to show their gratitude for keeping the theocracy off our backs." She also was a runner-up in a Hillary-worship category in 2000. (Screen shot is from an October 15, 1998 appearance on CNBC's Hardball when, as detailed by the MRC CyberAlert, Chris Matthews asked her why she had proclaimed she "would give the President the kind of sex that he got from Monica Lewinsky.")

Burleigh has written a piece for Salon.com (a liberal site, yes, but still viewing a corporate commercial is required) about how her son was molded into a little patriotic clone in small-town New York and how she learned that she, too, could love America, if only Bush wasn't ruining it with that vile war in Iraq:

'Early' Finds Only One Side of Rumsfeld Debate

The CBS Early Show this morning continued its tradition of "fair and balanced" reporting, as they addressed the interminable firestorm that has surrounded Secretary of Defense Donald Rumsfeld, seemingly since he was first appointed 5 1/2 years ago. They addressed the Rumsfeld issue twice in the first hour, and both times the focus was on the critics and criticism. There were no defenders of Rumsfeld in evidence, save for short clips from the President and the SecDef himself, and their comments were immediately followed by critics explaining how they're lying.

The first segment was the "straight news" report from CBS White House correspondent Bill Plante. This segment did include short clips from Bush and Rumsfeld, but immediately followed by "balancing" their comments with those of critics.

Sometimes they just can’t contain themselves.

Time Mag Warns of 'The Most Homophobic Place on Earth'

It's not clear what writer Tim Padgett is hoping to accomplish by the article, although it's possibly meant to put pressure on Jamaica and drive down tourism. Recently the BBC did a report claiming Iraqi homosexuals were better under Saddam. Now Time has an article sounding the alarm about Jamaica with the title: "The Most Homophobic Place on Earth?"

Newsweek’s Eleanor Clift has certainly never been accused of being an impartial journalist. Quite the contrary, when compared with other antique media members, Clift has to be considered one of the most consistently biased – unashamedly and unapologetically appearing as though the ideas for her columns as well as her screechy sermonettes on “The McLaughlin Group” emanate directly from Democrat talking points in her e-mail inbox.

This is why it must have been shocking for many readers to see the sub-headline of her most recent Newsweek piece (emphasis mine): “The Original Old-Fashioned Liberal: The descendant of Irish immigrants, Ted Kennedy badly wanted a reform bill. In the end, his own party stopped him.”

Now, before you get all excited over the possibility that Eleanor either had an epiphany or a rare moment of clarity, be advised that, in the end, she really didn’t blame the Democrats for anything.

When Sen. John Kerry lost to George W. Bush in the presidential election of 2004, the press turned its attention to 2008 and Sen. Hillary Clinton as a potential Democratic savior.

As Mrs. Clinton’s home state broadsheet, the Times has a front-row seat for the run-up to Election 2008. Yet a Times Watch study has discovered that ever since the Hillary-for-president talk heated up in earnest, the newspaper has used its seat more as a cheering section for Clinton than as a dispassionate perch for objective observation.

In A Yugo? Friedman Hoping For $100-A-Barrel Crude 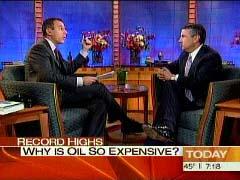 On this morning's Today show, NY Times foreign affairs columnist Thomas Friedman repeated his astonishing wish that the price of crude oil . . . go to $100/barrel ASAP. This is apparently a favorite Friedman mantra, as NewsBusters/MRC's Tim Graham and Brian Boyd have noted.