George Will Takes on Jim Webb -- Only After the Election

George Will turned heads yesterday with a brutal column on Senator-Elect Jim Webb, scouring him for being rude to President Bush at a reception, and then -- in a critique sure to outrage Webb, the literary lion in his own mind -- assaults Webb's hyperbolic use of English, as in saying the rich are "infinitely" richer than the poor. Will proclaimed Webb is a "subtraction" from civility. Well, we all love to jump on it when a lefty says something stupid, don't we? We should also point out when an ostensible Conservative news commentator says something ridiculous, too...

By Amy Ridenour | December 1, 2006 12:58 AM EST
The Laurie David/Al Gore/Keith Olbermann/Washington Post v. National Science Teachers Association controversy continues, with Science magazine weighing in with facts that don't look so good for Laurie David. (Watch for the drive by media to lose interest in this story any minute now.)

Here's the latest (earlier posts about aspects of this are here, here and here): 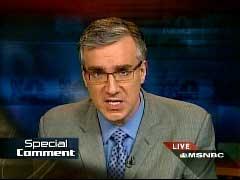 On Thursday's Countdown, two days after comparing Newt Gingrich's ideas on free speech and anti-terrorism measures to Naziism, MSNBC host Keith Olbermann aimed his latest "Special Comment" rant at the former House Speaker over a speech he gave at the Nackey S.

On Thursday's Countdown, MSNBC's Keith Countdown made Brent Bozell, President of the Media Research Center which runs NewsBusters, the “winner” of his nightly “Worst Person in the World.” Bozell's offense? Asserting that “probably a hundred Generals in the field in Iraq would disagree” with describing the situation in Iraq as a “civil war.” Olbermann demanded: “Okay, name them. We're waiting.” But seconds before Olbermann had inadvertently made Bozell's case as he recalled how “in August and September alone, the Chairman of the Joint Chiefs, General Pace and General Abizaid and General Casey all admitted that at minimum, Iraq could be headed to civil war.” Yes, “could” be “headed” for civil war, but not in one.

And, for someone who propounds to be such a stickler for accuracy (on Tuesday he ridiculed FNC for dropping one letter from his name), Olbermann flubbed a basic fact. Just as he did the last time he denounced Bozell as the “worst” (November 3 NewsBusters item), Olbermann called the Media Research Center the Media Research “Council.”

Couric Touts 'Rare Interview' with Maliki Which Consists of One Question

A night after the media were full of reports about how Iraqi Prime Minister Nouri al-Maliki had “snubbed” President Bush by deciding to not join a meeting with Jordan's King, Maliki snubbed CBS anchor Katie Couric who, nonetheless, teased “my interview with Iraq's leader” -- a session which she conducted by hastily sitting on a coffee table and which consumed barely 30 seconds of her newscast. Viewers heard two answers from Maliki, but just one question from Couric, a question the CBS Evening News played both in the up top tease and later in Couric's brief re-cap of her time with Maliki in Amman: “How frustrating has it been for you, Mr. Prime Minister, to not have greater authority sooner?"

Despite the brevity of the exchange, and how it was conducted with Couric sitting on the corner of a coffee table to face Maliki who sat on a sofa, Couric touted how “he sat down for a rare interview just after his meeting with the President.” Without irony, she noted how Maliki had “a lightning-fast summit” with President Bush. 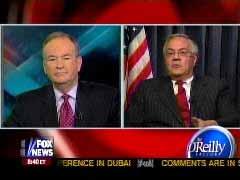 Thanks to former President Clinton and victories in the recent midterm elections, Democrats are now launching a full out attack on Fox News, the only television news outlet that holds them accountable. Congressman Barney Frank (D-MA) appeared on Wednesday’s The O’Reilly Factor to explain his recent attack on Fox News and once again lashed out on Bill O’Reilly when he issued him challenging questions. 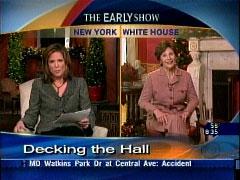 It may surprise conservatives, but CNN reporter Bob Franken alleged on Thursday’s "American Morning" that Democrats are eager to label Iraq a civil war in order to undercut U.S. support for remaining in the country. Considering the cable network’s cheerleading for the Democratic Party in the recently completed midterm elections, this plainspoken statement must have been unintentional. Franken’s comment came in the midst of an otherwise typical CNN report. The segment highlighted how all respectable individuals and organizations call the conflict a civil war, so why can’t President Bush? Remarking on the popularity of the civil war terminology, Franken offered an explanation for the Democrats embrace of the phrase:

Bob Franken: "But many experts say that designating this a civil war will undermine U.S. support even more, which might explain why so many Democrats are jumping on the bandwagon."

It's a competitive bout of conservative-bashing out of the Michael Richards N-word rant at the Laugh Factory. Newsweek had two columns from black staffers, both mentioning George Allen and "Macaca." Time just had one, by the white TV critic James Poniewozik, but in referring to Richards, Mel Gibson, and the canceled O.J. Simpson special, he works in Allen, the RNC Harold-Ford-mocking ad, and Rush Limbaugh's alleged hate for Michael J. Fox:

The New York Post is reporting that sales of the seventh season of "Seinfeld" on DVD are 75 percent higher than lasts year's sale of season six.

It seems that one prominent member of the ultra-left in our country is starting to get the sinking feeling that he was duped by the Democrat bait and switch campaign strategy. Schlockumentartist and leading propagandist Michael Moore practically issued a fatwa at his website Wednesday demanding Democrats bring American troops home from Iraq immediately or suffer the consequences in the next elections (grateful hat tip to NB member “aero”, emphasis mine throughout):

The responsibility to end this war now falls upon the Democrats. Congress controls the purse strings and the Constitution says only Congress can declare war. Mr. Reid and Ms. Pelosi now hold the power to put an end to this madness. Failure to do so will bring the wrath of the voters. We aren't kidding around, Democrats, and if you don't believe us, just go ahead and continue this war another month. We will fight you harder than we did the Republicans. The opening page of my website has a photo of Nancy Pelosi and Harry Reid, each made up by a collage of photos of the American soldiers who have died in Bush's War. But it is now about to become the Bush/Democratic Party War unless swift action is taken.

Moore followed with an outline that couldn’t be any clearer:

With each passing day, the media are debunking all the myths they helped foster about what the Democrats would do if they regained control of Congress. This one is beautiful, for it has to do with issues of national security, which was considered very important by voters just three weeks ago. As reported by the Washington Post’s Jonathan Weisman, but buried on page A7 (grateful hat tip to NB member “dscott,” emphasis mine throughout):

It was a solemn pledge, repeated by Democratic leaders and candidates over and over: If elected to the majority in Congress, Democrats would implement all of the recommendations of the bipartisan commission that examined the attacks of Sept. 11, 2001.

But with control of Congress now secured, Democratic leaders have decided for now against implementing the one measure that would affect them most directly: a wholesale reorganization of Congress to improve oversight and funding of the nation's intelligence agencies. Instead, Democratic leaders may create a panel to look at the issue and produce recommendations, according to congressional aides and lawmakers.

Isn’t that wonderful? Sound like a classic bait and switch? Regardless, the piece continued:

The winner of the 2008 presidential election will be the candidate who uses the internet the best according to Google CEO Eric Schmidt.

After listing several examples of politicians who were victims of highly effective internet campaigns, Schmidt elaborated on why the web is important: