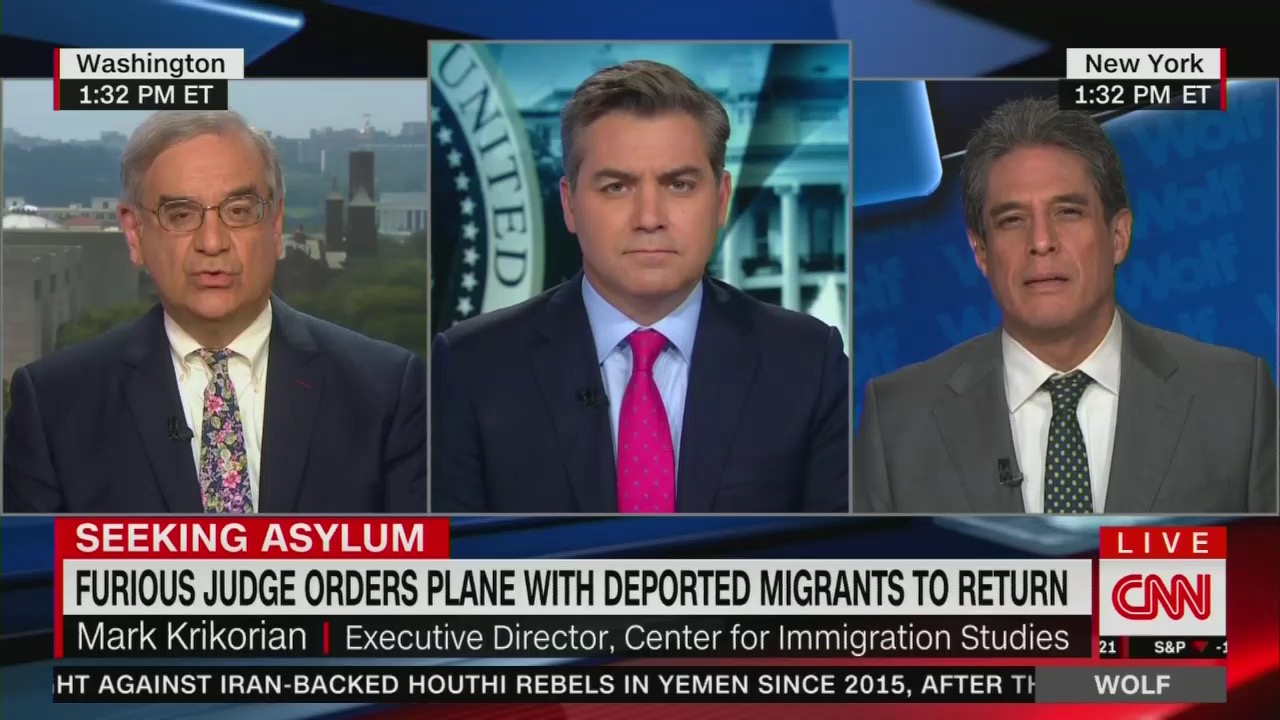 Friday afternoon grandstanding reporter Jim Acosta filled in as host of Wolf Blitzer’s eponymously named CNN show. And mid-program, Acosta desperately tried to get one of his guests to bash President Trump as a hypocrite for his stance on chain migration, and the Justice Department for accidentally deporting two asylum seekers. Instead, his conservative guest schooled the partisan reporter about hyping a “non-story.”

Acosta opened with the asylum seekers story, touting that the federal judge “erupted at the Trump Administration,” over the deportation of a mother and daughter from El Salvador, while their cases were still under appeal. Introducing guest Mark Krikorian, as the Executive Director of the Center for Immigration Studies, a “conservative think tank,” Acosta asked: “Do you think the administration is going overboard with deportations and this case illustrates that?”

No, it doesn't, because this kind of thing actually happens kind of frequently. It's a huge organization, Homeland Security, and wires get crossed. One of my analysts, in fact, used to be a prosecutor for the INS, used to be an immigration judge. He said it happened to him in one of his cases. You know these things happen. They found out about it later. The people never even get off the plane. The whole thing about holding the Attorney General in contempt and what have you, that's showboating by the judge because this is the kind of screw-up that frankly happens, and it was resolved, its not even really a story.

Clearly that wasn’t the answer Acosta wanted. He looked to it from his second guest, Raul A. Reyes, who is a very liberal CNN analyst and lawyer, but Acosta didn’t identify his ideology like he did with Krikorian.

“And Raul, is this just a screw-up, or is this part of a larger problem with the administration when it comes to how it handles immigration on the border?” he tried again.

“Well, sure, in my view, it does speak to a larger problem with this administration,” the liberal CNN analyst and lawyer began, arguing that more asylum seekers could fill the available jobs in the country.

Turning to the topic of Melania’s parents becoming U.S. citizens, Acosta cited Trump tweets against chain migration, asking Krikorian, how it was “appropriate” for the FLOTUS to use chain migration and not let others use it?

“Well everybody’s able to use it because the rules are still there,” he shot back. An unhappy Acosta interrupted by snarking: “Well, the president wants to end that Mark, you know that.” Krikorian then schooled the partisan journalist.

“My point is now, everybody is able to do it. If the rules change, then the First Lady wouldn’t be able to do it either,” he replied. Krikorian then made an analogy to mortgage interest tax deductions, saying it would be silly not use the deduction, even if in theory you were against the idea.

Acosta interrupted again to press again if Melania’s parents “should have been blocked from coming into the country?” Krikorian responded that Trump’s critics here were chasing a false idea to begin with:

[T]he bill that the president was promoting that actually almost passed in the House would not have prevented the First Lady’s parents from coming it just would have not given them green cards. They would’ve been able stay with a renewable visitor visa so they didn't end up going on Medicare. In a sense, this specific example doesn't even highlight what the critics are trying to say, that it's hypocritical or ironic or something. It actually isn't.

Instead of addressing Krikorian’s points, Acosta stuck to his liberal script, interrupting and asking his liberal guest, “Raul, do you see this as hypocritical?”

Of course, he did.