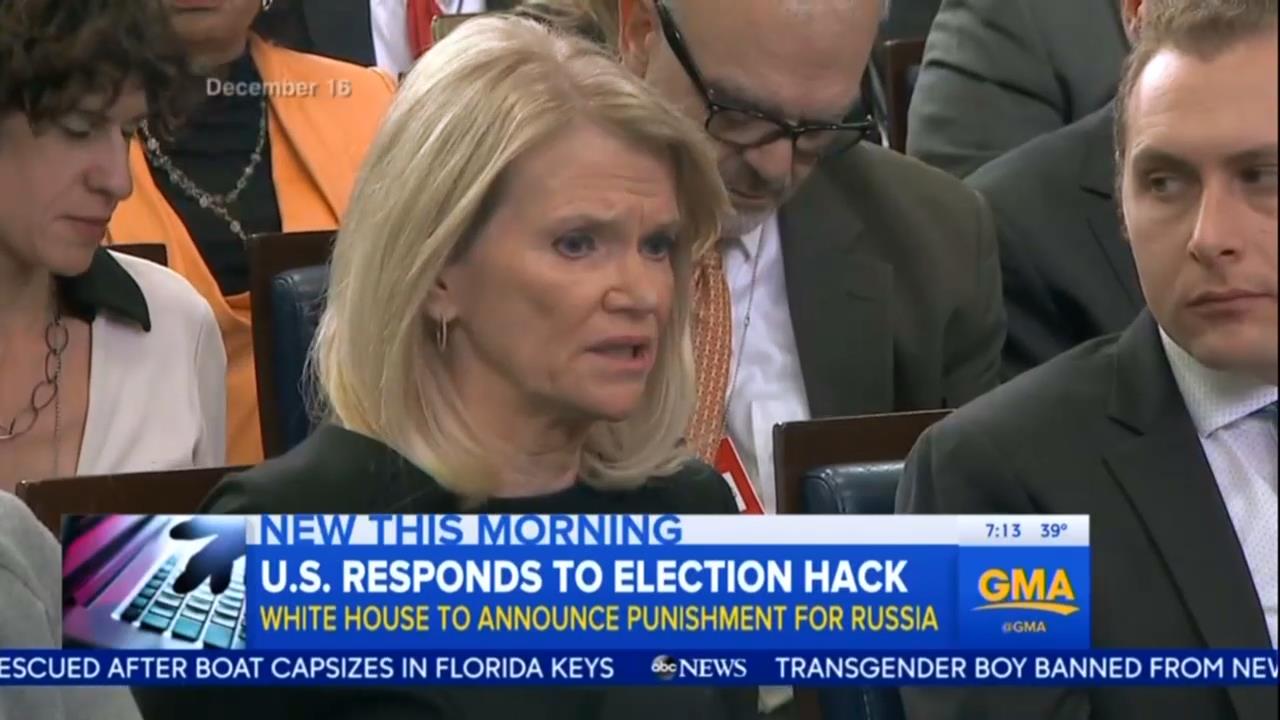 If you weren’t paying attention in the past month, you might actually believe that Russian spies infiltrated our voting booths to help Donald Trump win the presidential election. Well, at least that’s the perception the big three news networks are trying to create by repeatedly insisting that Russia “hacked the election.”

From December 8 to January 8, MRC analysts found that journalists on ABC, CBS and NBC repeated this loaded phrase at least 49 times in their morning and evening broadcasts. After blaming the electoral college for Clinton’s loss didn’t work, the media moved on to blur the release of Democratic e-mails with the idea that Russia “hacked the election.”

In fact, the declassified version of the report, released January 6, flatly stated that "DHS assesses that the types of systems Russian actors targeted or compromised were not involved in vote tallying." In other words, while embarrassing e-mails from Democratic political operatives were publicized, America's election machinery was not hacked. Nevertheless, the media has been relentless in attempting to legitimize this “fake news” story.

See journalists repeatedly claim the election was hacked in the video below:

Such as the December 18 interview with Trump advisor Kellyanne Conway, when Face the Nation host John Dickerson used the phrase three times, trying to get Conway to admit that Russia hacked the election:

DICKERSON: The theory is once Donald Trump clears the electoral vote on Monday he will drop the skepticism Russia was involved in hacking the election. What do you make of that theory?

DICKERSON: You have the entire intelligence community saying the Russians were hacking the election leaving the question whether it has an effect and a president-elect dismissing that. Does his entire team have the same view…?

DICKERSON: Did anyone in the Trump campaign have any contact with the Russians trying to meddle with the election?

DICKERSON: Does the President-elect approve of President Obama’s decision to retaliate against the Russians for hacking into the election?

On Face the Nation Jan.8, Dickerson again tried to get his guest to buy into the “hacked election” narrative, this time using peer pressure. Unfortunately for him, his conservative guest didn’t take the bait.

DICKERSON: Donald Trump according to what Mr. Priebus said today, seems to have a bit of an evolution from his previous skepticism. Priebus now says he believes what everybody else does: the Russians hacked into this election. What do you make of that?”

TAMMY BRUCE: Well, I think they hacked into the DNC. They didn’t hack into the election.

In another exchange on ABC’s This Week, Dec.18, Martha Raddatz didn’t use the word “hack” but got straight to the point:

MARTHA RADDATZ: So was the election legit?

DONNA BRAZILE: The election was tainted by this intrusion, but...

RADDATZ: Would Hillary Clinton have won without it, do you think?

Some journalists have denied an agenda to discredit the election, like Good Morning America anchor George Stephanopoulos, who claimed that “No one was questioning [Trump’s] victory,” and CBS Evening News correspondent Jeff Pegues who admitted, “[N]o one is saying that the actual vote count in the U.S. was hacked.”

But by using such a loaded phrase more than four dozen times in just one month, the media are doing exactly what they deny: suggesting that Trump's victory has somehow been tainted by a foreign power.