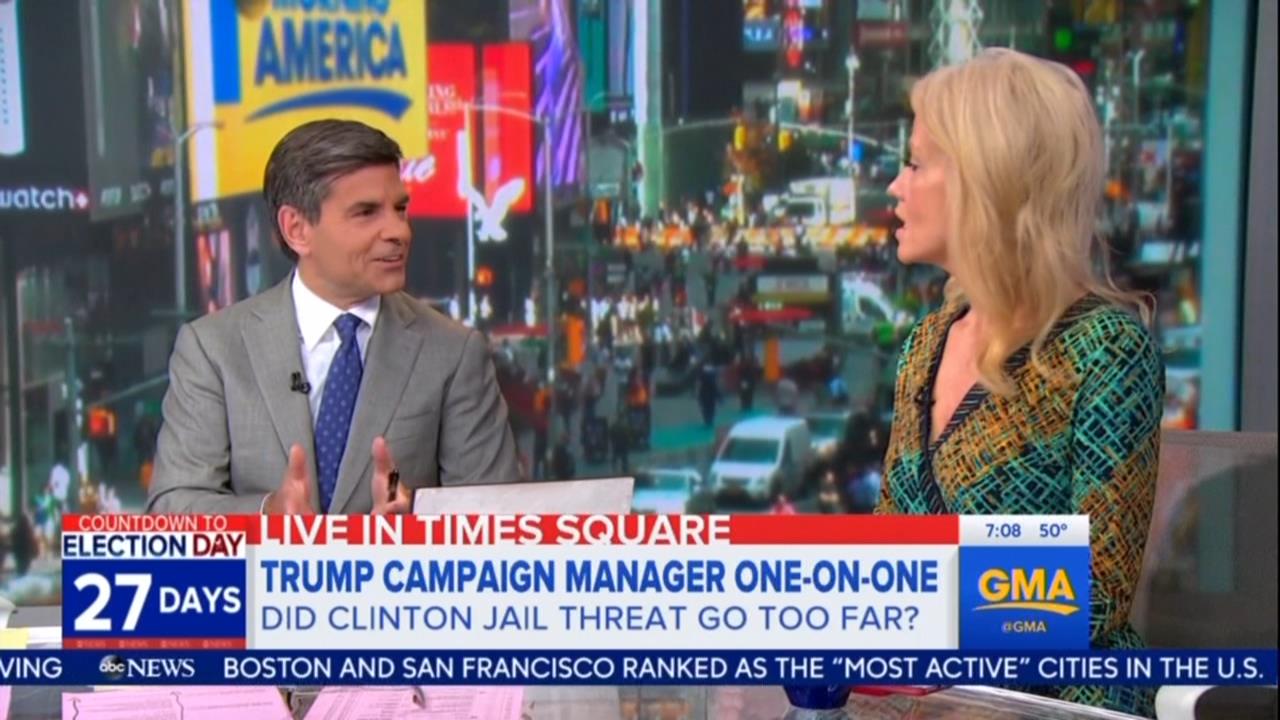 Wednesday’s Good Morning America was all in for Hillary Clinton, from the complete absence of any story on the Wikileaks e-mails on the Clintons, to a hostile interview with George Stephanopoulos and Kellyanne Conway. ABC didn’t even try to hide how pro-Clinton the news network is. It began with the Stephanopoulos interview with Trump campaign manager Kellyanne Conway, where the former Clinton staffer repeatedly grilled Conway about an anti-Hillary ad the Trump campaign had put out. “You’ve got a huge gap with women,” Stephanopoulos stated, “How are you going to be able to make that up, running ads like that?” he questioned.

Right from the start, Stephanopoulos began grilling Conway. He brought up the conflict between Paul Ryan and Trump, asking, “How is that going to help you win?” Before moving on to Trump’s gap with women voters. GMA first played an ad put out by the Trump campaign showing Clinton stumbling, being helped with aides to get into her car about a month ago, with Stephanopoulos implying the ad was sexist.

STEPHANOPOULOS: [W]e just saw that ad that you are playing now showing Hillary Clinton coughing, showing her stumble after that 9/11 ceremony. You've got a huge gap with women right now. How are you going to be able to make that up running ads like that?

Stephanopoulos kept pushing back as Conway tried to deny the ad was anything more than addressing voters concerns. “Right there you’re making fun of her health,” Stephanopoulos scolded.

Conway replied that Clinton’s health was “an issue” in the first debate, before Stephanopoulos fired back with, “In the second debate Mr. Trump said she always gets right back up.”

Conway then said she was glad Clinton was feeling better before Stephanopoulos sneered again, “Now you’re running an ad.”

Conway tried to make the case that the Clintons have always received special treatment, bringing up an ABC report from yesterday showing how the Clinton Foundation profited from giving relief to the 2010 hurricane victims in Haiti, and how FBI director Comey “made clear” that Clinton had lied about her e-mails. Stephanopoulos, playing the part of Clinton’s lawyer interjected:

“He said no reasonable prosecutor would bring the case," Stephanopoulos said flatly.