Thanks to some clever thinking from his staff, President Obama has an "ambitious plan to expand high-speed Internet access in schools that would allow students to use digital notebooks and teachers to customize lessons as never before," the Washington Post's Zachary Goldfarb giddily gushed in the lead paragraph of his August 14 front page article "Obama pushes Internet proposal."

"Better yet, the president would not need Congress to approve it," the Post scribe added. The catch, obviously, is that the so-called ConnectEd program "would cost billions of dollars" and so the president "wants to pay for it by raising fees for mobile-phone users" by getting the Federal Communications Commission (FCC) to approve the plan. Of course, that's just a tax on the American consumer by a different name, and it's taxation without representation to boot, but Goldfarb waited until about halfway through his article to get to any constitutional objection to the scheme:


“Using the FCC as a way to get around Congress to spend money that Congress doesn’t have the political will to spend — I think that’s very scary,” said Harold Furchtgott-Roth, a Republican former FCC commissioner. “Constitutionally, it’s Congress that decides how federal funds should be spent.”

That came in paragraph 15 of the 27-paragraph story and was followed by Goldfarb discussing how Obama was moved to act in such a unilateral manner because of his "frustration that countries such as South Korea had embraced technology in the classroom so much better than the United States had."

"We are here to do big things -- and we can do this without Congress" Goldfarb quoted Obama via the recollection of an unnamed aide. 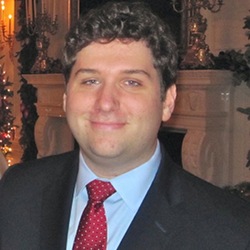 In fairness, earlier on in the piece, Goldfarb (pictured at right; photo via his Twitter profile) did note that "others question whether it's appropriate to use the FCC to fund an initiative that is better left to Congress's authority," but propriety and constitutionality are distinct, not interchangeable concepts.

Those who see this move as unconstitutional would say it's not that Congress is "better left" the role of passing new taxes but that writing new federal tax law is solely the role of Congress, not regulatory bodies. Indeed, when the FCC dreams up and then votes to collect "fees" to raise revenue for yet another government project, it amounts to another tax on American consumers levied without their consent by elected representatives. Additionally, when an independent regulatory commission imposes such new taxes, it provides a level of political cover for the president, who can insist said commission is technically an independent agency outside of his direct control.

Also absent from Goldfarb's piece was another constitutionalist objection: states and local governments are more than free to try this scheme on the local level. Education is a state and local concern, and there's nothing stopping liberal state and local legislative bodies from dreaming up taxes on cell phones to fund equipping schools with tablet computers and the like.

Of course, raising those objections would diminish the triumphal cheerleading which exults in President Obama taking end-runs around Congress -- Constitution be damned -- all for the supposed greater good.