The AP Lies About Trump and Muslims, and the Media Mob Follows

This is exactly the kind of thing that breeds such massive mistrust in the mainstream media.

The Associated Press, as here with their AP Politics feed, headlined this:

Trump suggests database to track Muslims in US

The story also focused on Dr. Ben Carson saying that just because you pay attention to a rabid dog, all dogs are not rabid. Coming as Carson’s remark does on the same day the father of one of the Paris Islamists, Omar Abaaoud, called his own son a “psychopath and a devil” it would certainly seem Carson’s point is hardly extraordinary.

But the real story here is the AP’s description of Trump’s remarks. Here’s an excerpt: 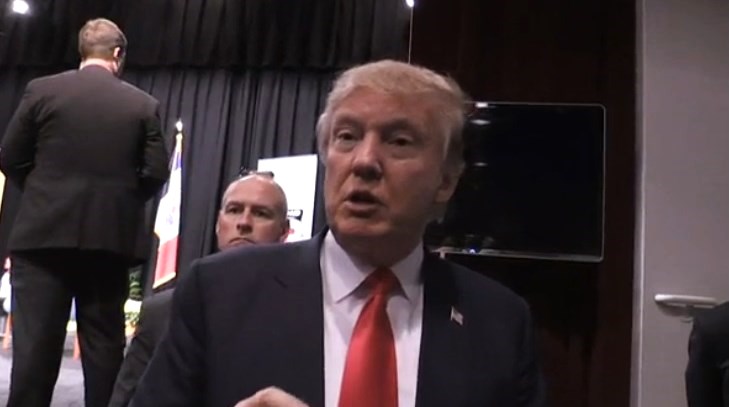 WASHINGTON (AP) — Top Republican presidential candidates Donald Trump and Ben Carson are ratcheting up their rhetoric about Muslims, with Trump calling for a mandatory database to track Muslims in the United States and Carson comparing Syrian refugees to rabid dogs.

…..Florida Gov. Jeb Bush was the first Republican rival to condemn Trump's call for a database, saying his proposal is "just wrong.”

…Trump's comments about a national database for Muslims came Thursday night while he was campaigning in Iowa. In a video posted on MSNBC.com, Trump was asked whether Muslims would be required to register. He replied, "They have to be.”

He said Muslims would be signed up at "different places" and said the program would be "all about management."

Stop! This is a total misrepresentation of what Trump said. A serious hat tip to conservative columnist  A.J. Delgado who took the time to report the facts. Writes A.J.: "Apparently, no one actually stopped to watch the actual video from which this false claim derives."

She includes a link to the video -- found here at MSNBC. Where, shocker, the left-wing network headline came with a major twist: "Trump’s plan for a Muslim database draws comparison to Nazi Germany."

Then A.J. writes as follows, first including an exact transcript. It reads this way (with her comments):

REPORTER: “Should there be a database system who tracks the Muslims that are in this country?”

REPORTER: “Is that something your White House would like to implement?”

TRUMP: “Oh, I would certainly implement that. Absolutely.”

REPORTER: “What do you think the effect of that would be? How would that work?”

REPORTER: “But more specifically how do you actually get them registered in the database….?”

REPORTER: “I mean, do you go to the mosques and sign these people up and into the system?”

REPORTER: “Would they have to legally be in this database?”

TRUMP: “They  have to be – they have to be, let me just tell you: that the key is people can come to the country but they have to come in legally. Thank you very much.”

So even when concluding, Trump is talking about illegal immigration and registrations/databases pertaining to THAT — not to “all” Muslims and certainly not all Muslims “in the U.S.” At the very least, he and the reporter seem to be talking past each other. Trump makes it clear TWICE that he’s referring to illegal immigration and yet somehow this has turned into “Trump wants every Muslim in the U.S. to be registered in a database.

Another point worth noting is, considering the loud atmosphere, Trump (and any reasonable person), I believe interpreted the question to be about Muslims “coming into” rather than “in” the U.S. (which also would then perfectly explain why he starts mentions immigration and thinks that’s what the reporter is asking about). It especially makes sense to ask about Muslims “COMING IN” in light of the fact that THAT’s what the current controversy is about (the Syrian refugees).”

Meanwhile, over at the myth-busting site Snopes, content manager Kim LaCapria also looked into the story - and headlined her findings this way:

LaCapria wrote in part that the idea that "the mandate of badges for Muslims was quite a leap by any measure." Exactly.

And over at Breitbart, Joel Pollak has done a step-by-step of just how the "Trump is a Nazi" smear was put together.

Most importantly? Rush Limbaugh jumped on this lie instantly. Among other things Rush headed the print version of his monologue in this fashion: 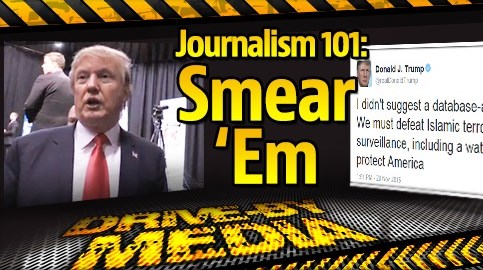 RUSH: The Drive-Bys are trying to destroy the two leading Republicans again today, Donald Trump and Ben Carson.  They are doing a terrific job of taking Trump out of context.  He was leaving the stage, I guess it was last night, he was doing a personal appearance somewhere, he was leaving the stage, he's finished, and a Drive-By gets amongst the autograph speakers and starts peppering him with questions.

He answered a question and it's how the reporter is purposely misinterpreting it to say that Donald Trump last night said that he's in favor of a registration database of all Muslims in the US, and everybody in the Drive-Bys has run with it, and he didn't say it.  We have the audio sound bite coming up to illustrate it....

Now, two things about this.  The first is, as I said, everybody in the Drive-By Media is running with this because they think they've got Trump again.  They're salivating out there, folks, they are hoping, they've got their fingers crossed, they've doubled down, they're putting this story everywhere: Trump sexist, Trump bigoted, Trump anti-Muslim, wants a database; wants to go to their mosques to sign 'em up; wants to have them carry around symbols on their clothes to tell everybody who they are. And he never said it.

This reporter, Hunter Walker, retweeted the headline from the AP.  The AP headline:  "Trump Says He Would Absolutely Implement Muslim Database."  This little know-nothing reporter is so proud of his work today.  This, as I say, journalism 101.  This is what they teach you when you want to take out a political opponent or a powerful person you don't like, this is how you do it, with innuendo.

So it's gonna be fascinating to see where this Trump story goes, because right now, much as I hate it, hate when these people get away with this crap -- and crap is what it is -- where we are right now, virtually everybody who has seen that story, who has not listened to this program, thinks it's true.  And by the way, you can't miss the story.  I mean, it's everywhere the low-information crowd reads.

It's at The Wall Street Journal. It's at the AP. It's at Yahoo News. It's all over the place.  The whole thing is "Trump advocates a national registry for Muslims," and they wear some kind of signage or symbol that they are and so forth.  And he never said it, never, ever said it.  In fact, the question was a trick question, and Trump still didn't go there.  It's totally made up.

Now consider. This is the Associated Press we're talking about here,  and the AP can blatantly misreport what Trump actually said, and it goes everywhere. Note that at the very beginning of the AP report, the misrepresentation of what Trump said is fed to Jeb Bush -- who promptly does as expected and condemns Trump.for saying something Trump never said.

Even Ted Cruz swallowed the bait, as Rush noted. The AP's false story is fed out to all the television networks, cable and broadcast, to radio, to newspapers, blogs and the world of Twitter. Thus the lie becomes the Big Lie. Injected into the media bloodstream with nary a soul taking the time -- as did A.J.Delgado, Kim LaCapria, Joel Pollak and of course Rush -- to actually read the transcript and understand exactly what was said, and not said.

Again. Let's be crystal clear here. Donald Trump was talking about people coming in to this country illegally. About registrations and databases for people coming in to this country illegally. Not to put too fine a point on this, but how in the world does anyone think the illegal immigrant Francisco Sanchez -- the killer of Kate Steinle -- was quickly identified as having been deported five times? Answer? Because Sanchez was in a database! A database run right this minute by.yes.the Obama administration.  Which is precisely what Trump was discussing. He never discussed the rest. He didn't say it. It's as simple as that. Yet it was reported everywhere - although finally Fox News caught on.   The Fox headline: "Trump causes firestorm with Muslim registry remarks - but what did he really say?"

Best of all? As attention was paid by Delgado, Breitbart, Snopes, Rush and Sean Hannity to the game being played, Trump himself tweeted that he never said what was attributed. So retractions forthcoming? Are you kidding? Not a prayer. Instead there were a new round of stories - as here from Mediaite and NBC saying that Trump has now "backtracked." Not that the media got the story wrong - oh no. Heaven forbid. It's Trump who has "backtracked."

This is shameful. Utterly unprofessional journalism. And utterly typical. And you wonder why the American people have such a low opinion of journalists?