Minutemen Murdering Illegals? Only in Hollywood

On NBC's Wednesday night Law & Order, members of the volunteer border group the Minutemen are suspected of killing people coming across the border.

CHARACTER: You classify that as something going down?!

ANNOUNCER: Was it murder? Or Minutemen protecting our borders?

CHARACTER: Nathaniel shouldn't go to jail for protecting this country!

The headline, “US Has Detained 83,000 in War on Terror”, greeted me when I logged on the Internet on Wed. Nov. 16 after lunch.  I was stunned. Where were all the prisoners being held?  Was this another leak from the CIA?  I clicked on the link without thinking twice.

Salon is about to turn ten years old, and Gary Kamiya, who helped found the left-liberal online magazine and is now its "Vice President of Content/Executive Editor," has penned a look back. (Hat tip: Romenesko.)

By Mithridate Ombud | November 16, 2005 2:08 PM EST
It's hard to believe this story actually ran, front page (online) no less, but a little easier to believe when you realize it was the San Francisco Chronicle. Let me recap some of the highlights:

Stop It, Breeders
"We can't be breeding right now," says Les Knight. "It's obvious that the intentional creation of another [human being] by anyone anywhere can't be justified today."

"As long as there's one breeding couple," he says cheerfully, "we're in danger of being right back here again. Wherever humans live, not much else lives. It isn't that we're evil and want to kill everything -- it's just how we live."

Knight's position might sound extreme at first blush, but there's an undeniable logic to it: Human activities -- from development to travel, from farming to just turning on the lights at night -- are damaging the biosphere. More people means more damage. So if fewer people means less destruction, wouldn't no people at all be the best solution for the planet?

Back during the impeachment days of the late 90s Ken Starr was portrayed as an out-of-control prosecutor peeping through Bill Clinton's Oval Office window. Fast forward to this morning's Today show and we find Patrick Fitzgerald is getting the star treatment from People magazine.

At 7:51am Today had an exclusive unveiling of People magazine's Sexiest Man Alive issue and it turns out Fitzgerald made the list:

Katie Couric: "Do you have the thinking woman's sex symbol in there at any point?"

The Trouble with Forecasting

By Dan Gainor | November 16, 2005 2:00 PM EST
Network fails to provide even a hint of balance in global warming special.

The Hill is a specialized publication, mostly for Members of Congress and those whose living depends on Congress. Still, an article in The Hill today (Wednesday) is typical of the media coverage of the Senate vote yesterday to require “reports” to Congress on the progress of the Iraq War.

The title is “Needed: An Exit Strategy from Iraq.” It is written by Rep. Jane Harman (D. Calif) and its lede includes these paragraphs. 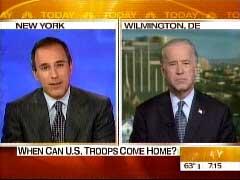 One day after Katie Couric snapped at Bill Frist for "parroting" the administration line on Iraq, Matt Lauer asked Joseph Biden if a new Senate resolution on Iraq had, "any teeth in it?" NBC’s Today show has been hoping to use a new Republican resolution on Iraq as a way to show even supporters are fleeing from Bush.

NY Sun Shines Light On CPB: Scandal Is That The Government Is Funding Journalism at All

By Clay Waters | November 16, 2005 11:19 AM EST
A New York Sun editorial (subscription may be required) notes the New York Times and a couple of (surprise) Democratic liberal senators are "in a lather over Kenneth Tomlinson's just-ended chairmanship at the Corporation for Public Broadcasting. They're particularly incensed over a report released yesterday by CPB's inspector general, for which [Democratic Senators] Dingell and Obey pressed, that suggests Mr. Tomlinson 'broke the law' in the course of pursuing his attempt to restore some balance to public broadcasting."

It’s become almost too commonplace of late – an article by a major, mainstream newspaper suggesting that President Bush misled the American people, as well as Congress, concerning the existence of WMD in Iraq, and the threat Iraq represented to America. For instance, just yesterday, the New York Times published an editorial with such a premise:

“To avoid having to account for his administration's misleading statements before the war with Iraq, President Bush has tried denial, saying he did not skew the intelligence. He's tried to share the blame, claiming that Congress had the same intelligence he had, as well as President Bill Clinton. He's tried to pass the buck and blame the C.I.A.”

And, a front-page Washington Post article this past Saturday by Dana Milbank and Walter Pincus asserted this same theme:

Yet, neither of these two publications was so convinced about this issue before Bush was first inaugurated in January 2001, and both took rather strong positions about the existence of such WMD in Iraq, and the threat that country represented to America.

Concluding a probe prodded by Senate Democrats, the inspector general of the Corporation for Public Broadcasting, Kenneth Konz, released his report yesterday on whether former CPB Board Chairman Ken Tomlinson violated agency rules and procedures in his attempt to bring some (or any) balance to the routinely liberal on-air content of public broadcasting. Konz said yes.

By Greg Sheffield | November 16, 2005 12:49 AM EST
WuzzaDem has a hilarious "interview" between Simpsons character Comic Book Guy and Mary Mapes. CBG is known for sarcasm, making him a perfect fit with Mary Mapes.