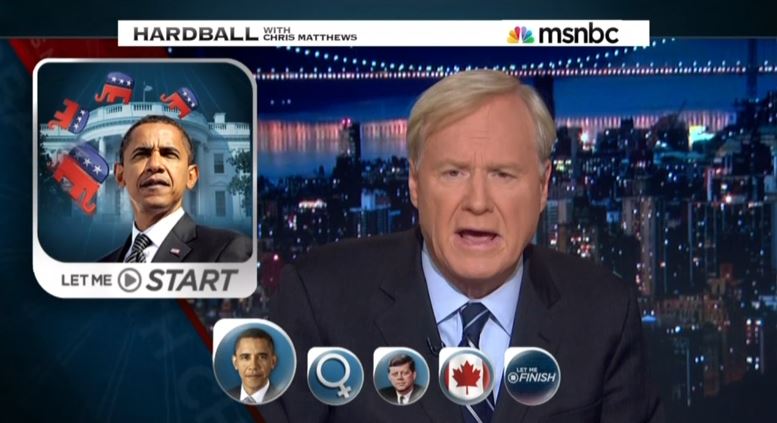 All this week, NewsBusters is recounting the most obnoxious liberal bias of the decade. Monday, we presented the most outrageous examples of journalists fawning over liberal or left-wing icons; on Tuesday, we showcased some of this year’s nastiest attacks on conservatives; and yesterday, we highlighted the media’s Trump Derangement Syndrome.

Today, we’re reviewing the most over-the-top adulation of Barack Obama from the last decade.

From Newsweek proclaiming his election “the Second Coming” to Chris Matthew’s non-stop thrills the following are the most ridiculous media Obamagasms from the past 10 years:

“This guy’s done everything right. He’s raised his family right. He’s fought his way all the way to the top of the Harvard Law Review, in a blind test becomes head of the Review, the top editor there. Everything he’s done is clean as a whistle. He’s never not only broken any law, he’s never done anything wrong. He’s the perfect father, the perfect husband, the perfect American. And all they do is trash the guy.”
— MSNBC’s Chris Matthews talking about President Obama on Hardball, July 17, 2012.

Clip of Barack Obama from 2008: “My family gave me love. They gave me an education. And most of all, they gave me hope. Hope, hope that in America, no dream is beyond our grasp if we reach for it, and fight for it, and work for it.”
MSNBC’s Chris Matthews: “I get the same thrill up my leg, all over me, every time I hear those words. I’m sorry, ladies and gentlemen, that’s me. He’s talking about my country and nobody does it better. Can President Obama stir us again and help his party keep power this November?”
— Setting up a segment on MSNBC’s Hardball, September 7, 2010.

“Can We Just Enjoy” This “Ecstatic Human Achievement” That Is Obama?

“Can we just enjoy Obama for a moment? Before the policy choices have to be weighed and the hard decisions have to be made, can we just take a month or two to contemplate him the way we might contemplate a painting by Vermeer or a guitar lick by the early-seventies Rolling Stones or a Peyton Manning pass or any other astounding, ecstatic human achievement? Because twenty years from now, we’re going to look back on this time as a glorious idyll in American politics, with a confident, intelligent, fascinating president riding the surge of his prodigious talents from triumph to triumph....’I am large, I contain multitudes,’ Walt Whitman wrote, and Obama lives that lyrical prophecy....Barack Obama is developing into what Hegel called a ‘world-historical soul,’ an embodiment of the spirit of the times. He is what we hope we can be.”
— Esquire’s Stephen Marche in a column for the magazine’s August 2011 issue: “How Can We Not Love Obama? Because Like It or Not, He Is All of Us.”

“You know, I’m a Christian preacher, and God finally said, ‘Look, I can’t send nobody else. I got to go myself.’ And I ain’t saying that Obama is Jesus, but for many of his followers he is.”
— MSNBC contributor Michael Eric Dyson on Melissa Harris-Perry, August 23, 2014 arguing for Obama to visit Ferguson, Missouri.

“We don’t know if the Iran deal is going to work. If it does, it will be the major foreign policy achievement, not only of this presidency, but of this American generation. At which point, people in the not-too-distant future will look back at this presidency, they’ll look back at this President and they’ll say, ‘Oh, of course they gave him the Nobel Peace Prize. Of course they did.’”
— Host Rachel Maddow on her eponymous MSNBC show, July 14, 2015.

“Lucky” to Have Him

“Americans are lucky to have Barack Obama as President and we should wake up and appreciate it while we can. President Obama will go down in history as an extraordinary President, probably a great one....It would be a morale booster and a sign of civic maturity if more Americans appreciated what an exceptional President they have right now. It could be a long wait for the next one.”
— Former CBS News producer Dick Meyer, now Washington Bureau Chief for Scripps News, in a July 16, 2015 Decode DC op-ed titled: “Mr. President, on behalf of an ungrateful nation, thank you.”

“Wait. One of the Greatest?...Like 20-Dollar Bill great? Like Mount Rushmore great? Yep. (We just won’t build Mount Rushmores anymore.) In so many ways, Obama was better than we imagined, better than the body politic deserved, and far, far better than his enemies will ever concede....We’ll look back at history, hopefully when we’re zooming down the Barack Obama Hyperloop Transport System, and think: That man was rare. And we were damn lucky to have him.”
— GQ editor-in-chief Jim Nelson in an April 14, 2016 online article “Why Obama Will Go Down as One of the Greatest Presidents of All Time: Already missing our soon-to-be-former POTUS.”

PBS’s Charlie Rose: “I want to raise two big issues about him that are fascinating to me and, Jon, all of you. How smart is he? What’s the sense of — is he one of our brightest presidents?”
Longtime Newsweek editor Jon Meacham: “I think so, absolutely. I think so, and I think it has all of the pluses and minuses of that.
Rose: “I’m asking from a real standpoint.”
Meacham: “It’s a keen analytical intelligence.”
— Exchange on PBS’s Charlie Rose show, January 12, 2016.

“Really, has there been any President cooler than Obama?”
— May 10, 2016 tweet from Newsweek’s official Twitter account, plugging an online piece on whether Barack Obama is “the first pop culture President.”

The Greatest Since Lincoln

“[Barack Obama] invoked the audacity of hope, all of the spirit, all of the creativity of his own brilliant speech writing....I don’t think we’ve ever had a President, save Lincoln, who is as great a speechwriter as this man.”
— Correspondent Andrea Mitchell following Barack Obama’s speech as aired on MSNBC’s live Democratic convention coverage, July 27, 2016.

“It’s hard, frankly, to stop quoting from his [Barack Obama’s] remarks because they amounted to one of the most moving, inspiring valentines to this country that I’ve ever heard, brimming with regard for it and gratitude to it. We’re going to miss this man, America. Whatever his flaws, he’s been more than our president. Time and again, he’s been our national poet.”
— New York Times columnist Frank Bruni in July 28, 2016 piece, “Freedom from Fear.”

Savior of the World

“I read somewhere that what you’ve done with your climate change plan is the most significant thing any single human being has ever done to protect the planet. That’s amazing because there are so many skeptics out there.”
— Host Bear Grylls with Barack Obama in Alaska on NBC’s Running Wild With Bear Grylls, December 17, 2015.

“What’s helping Barack Obama’s legacy with the press is Donald Trump. By comparison, he’s like St. Augustine up there talking to the flock.”
— CNN presidential historian Douglas Brinkley on CNN Tonight, January 18, 2017.

“Well, it’s pretty well known I’ve always gone for this guy [Barack Obama]. I’ve liked the way he speaks about our country, from the time I first heard him in 2004 up in Boston at the convention....It was magnificent....He has that Julia Roberts smile of his that he saves and when he does it, you can’t resist the guy.”
— Hardball host Chris Matthews during MSNBC’s live Democratic convention coverage, July 27, 2016.

“When I hear a statement like that –  read a statement like that from Barack Obama  – who is, as we’ve said, an introspective and thoughtful and very wise man – and a brilliant writer. And he says something like ‘maybe I came along 20 years too soon,’ my reaction to that is: What do you mean? Which is to say, I cannot possibly fill in the paragraph that, that is the first sentence of, if it is spoken by Barack Obama because his mind is too supple, too complex, too rich compared to my own to fill out what the rest of that thought is.”
— MSNBC’s The Last Word host Lawrence O’Donnell on MSNBC’s AM Joy, June 2, 2018.