Comic legend and liberal activist Chevy Chase was invited on Thursday's Today show to promote his NBC comedy "Community" and advocate for environmentalism on this Earth Day, as he told viewers he'll be emceing a charity auction to benefit liberal greenie groups like the NRDC. In the process of noting some of the items to be auctioned off at the Christie's event, including a golf outing with Bill Clinton, Chase revealed none other than Today co-anchor Matt Lauer offered his own donation - a guided tour of the Today set. [audio available here]

The following exchange was aired on the April 22 Today show:

MEREDITH VIEIRA: You're not just an icon, you are an emcee tonight at a very important auction.

CHEVY CHASE: Yeah tonight I'm emceing this Christie's Auction. It's a green auction. It's to save the Earth. And let me just mention that it's also gonna be sponsored by Oceana, NRDC, the conservation-, in other words there are, Central Park Conservancy. 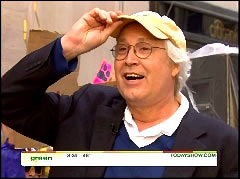 AL ROKER: All the profits go to those organizations.

CHASE: There are a number of organizations, four that will be benefitted.

CHASE: And I can just quickly give you, from CharityBuzz.com a list of some of the, like golf with President Clinton will be auctioned off. A tour of the Today show with Matt Lauer.

CHASE: Is he still on that? Yeah. Oh and then Jane Pauley. Oh no!

CHASE: Anyway but it's, there are some great things. Gonna be doing that and of course I always celebrate Earth Day quietly at home with a bonfire and some liquor.

LAUER: We were actually talking about 40th anniversary of Earth Day. And you were on the first Earth Day where? 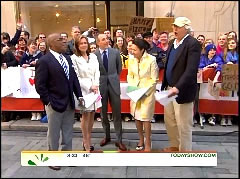 CHASE: As I remember her name was-

LAUER: Don't do that!

CHASE: I don't know! I had no idea where I was but I know I was for it.