By Greg Sheffield | October 17, 2005 3:15 PM EDT
NewsBusters contributor John Armor reported that on the ABC News website there is a story with the misleading headline: "White Supremacists Riot in Toledo Ohio."

The neo-Nazis in Toledo were unable to carry out their protest, and the actual rioters were mostly gang members looking for an excuse to make trouble.

John Armor reported that "both the Associated Press and ABC News have now changed the title to the accurate statement that "Anti-White Supremacists" were the ones who rioted."

Auto Workers Benefits: Catching Up with the Times

By | October 17, 2005 2:00 PM EDT
Broadcasters worry about the future of the American economy, but the NY Times points out that automakers are behind other industries when it comes to the reality of employee benefits.

By | October 17, 2005 2:00 PM EDT
USA Today gives apocalyptic view of declining oil supply before admitting it might not come to pass.

A Michelle Wie Headline Is No Longer Operative

By Clay Waters | October 17, 2005 12:58 PM EDT
No bias here, but kind of amusing: The front of Saturday's Sports page featured a picture of the 16-year old golf phenom Michelle Wie taking a free drop of her ball after it was ruled unplayable in the first round of the Samsung World Championship. The headline over the accompanying story read "Wie Knows How to Play, And She Knows the Rules."

By Greg Sheffield | October 17, 2005 12:22 PM EDT
The Washington Post has an article about the deteriorating relationship between White House press secretary Scott McClellan and the reporters who cover the White House.

CBS correspondent John Roberts says McClellan "has adopted this siege mentality in which the best way to deflect the question is to attack the questioner. I'm not quite sure who he's playing to -- maybe the segment of the Republican Party that believes we're a bunch of liberals who have our own agenda."

AP Iraq Coverage: Believe the U.S. Military or Us?

Does the Associated Press take sides against the U.S. military when reporting in Iraq? You decide. In a story today describing retaliation for a roadside bomb that killed five American soldiers on Saturday, the ABC/AP story titled, “U.S.: 70 Insurgents Killed in Airstrikes,” opens:

Less newsworthy than a baseball game, and in any case, just another "potentially divisive event." That's the back-of-the-hand treatment the Today show gave the apparent approval of the Iraqi constitution in this weekend's referendum.

Katie Couric opened Today by touting a tropical storm in the Caribbean, the travails of Rove and Libby and the White Sox's victory. Not a word about the Iraqi referendum.

This is the oldest media bias kvetch in the book.

It took ABC Radio's Martha Raddatz only two sentences to report the vote on the Iraqi constitution.  In the first, Raddatz allowed as how the referendum probably passed.  In the second, Raddatz said (my memory),

"It cannot be denied, however, that thousands and thousands of Sunnis will be living under an Iraqi government they did not want."

Yes, Martha, in elections, that's the way it works.  One side wins and one side loses.

The Title ABC Only Wishes Were True: 'White Supremacists Riot'

The Associated Press led the way nationally in dishonest reporting on the riot in Toledo, Ohio, Saturday, Oct. 15.. Below is a screen capture of the false headline and subhead from the AP story, copied by ABC News:

With The recent election turning out to be better than anyone had expected, the Associated Press has decided to do its best to drag everyone back down to reality. The only problem here for the AP is the reality they seek to push is their own.

ABC’s Andrea Canning on Sunday's “Good Morning America” did a report on Divorce Parties. That’s right, married women having a party to celebrate their divorces. In fact, Canning in her report referred to the party as “Part celebration, part exorcism.”

At this party, they play games like throwing the wedding ring into the toilet, as well as with voodoo doll figurines of the former husband.

Of particular note, the report made no mention of ex-husbands having such parties. Quite the contrary, the only person in this piece who wasn't celebrating was a divorced man: "I don't find anything about divorce to be funny at all. I find the whole experience rather tragic."

What follows is a full transcript of this report.

In the midst of the recent controversy surrounding Harriet Miers' political leanings, the media seems to have come to its own comfortable determination that Miers is a suitable candidate for the Supreme Court.

National Black Justice Coalition president and gay activist Keith Boykin was prevented from speaking at yesterday’s Millions More Movement March in Washington, DC. As Boykin was walking to the podium, he was at the last second turned away.

Oddly, this controversy has gone largely unreported. A Google-search suggested the only mainstream outlet that covered this was the Washington Post, though they buried the article on page A16.

At the heart of the conflict is Rev. Willie F. Wilson, the march’s national executive director who apparently made some disparaging remarks about lesbians this summer.

Boykin had this to say about the snubbing:

“This is what happened today. After I arrived at the VIP tent shortly after 8 in the morning, my colleague Donna Payne spoke directly to Rev. Willie Wilson backstage, and he informed her that no one from the National Black Justice Coalition would be speaking today. Donna told Rev. Wilson that he was violating our agreement, and Wilson replied that the agreement was void because the Coalition had not responded by Friday. That was not true.”

For those unfamiliar with Boykin, this is a Dartmouth College and Harvard Law School graduate who was part of President Clinton's trade delegation to Zimbabwe in 1997 along with Rev. Jesse Jackson, Coretta Scott King, and Transportation Secretary Rodney Slater. 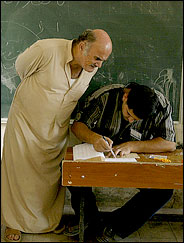 A New York Times article placed prominently on the front page of Sunday’s print edition, written by Dexter Filkins and John F. Burns, played down the success of Saturday’s vote in Iraq concerning that nation’s constitution, and suggested that turnout was lower this time than during January’s elections:

“On Saturday in Baghdad, streets were noticeably bare of pedestrians, polling centers were less busy, and voters exhibited little enthusiasm.

“‘I sense that the turnout will be lower this time,’ said Zainab Kudir, the chief poll worker at the Marjayoun Primary School in a predominantly Shiite neighborhood in Baghdad. ‘People feel their needs have not been met. There is no security. There are no jobs.’"

Yet, after many other media outlets reported that turnout was going to surpass January’s final tally, Filkins and Burns posted this at the Times website just moments ago: