While the liberal broadcast networks ABC, CBS, and NBC have spent nearly 32 minutes (31 minutes, 47 seconds) hyping the disintegrating bombshell against Justice Brettt Kavanaugh over the past three days, they have withheld from viewers how Christine Blasey Ford friend (and supposed corroborating witness) Leland Keyser now states that she has does not believe Ford’s account.

Both of these disclosures were contained in a new book excerpt by New York Times reporters Robin Pogrebin and Kate Kelly, but apparently only the anti-Kavanaugh allegation was deemed worth of airtime and inclusion in the Sunday Review print section of The Times.

Thanks only to CBS News Justice correspondent Jan Crawford on Monday night, there have been 36 seconds dedicated to Keyser’s admission. In totality, that translated to a measly 1.89 percent of network Kavanaugh coverage from Sunday through Tuesday morning highlighting this inconvenient fact. 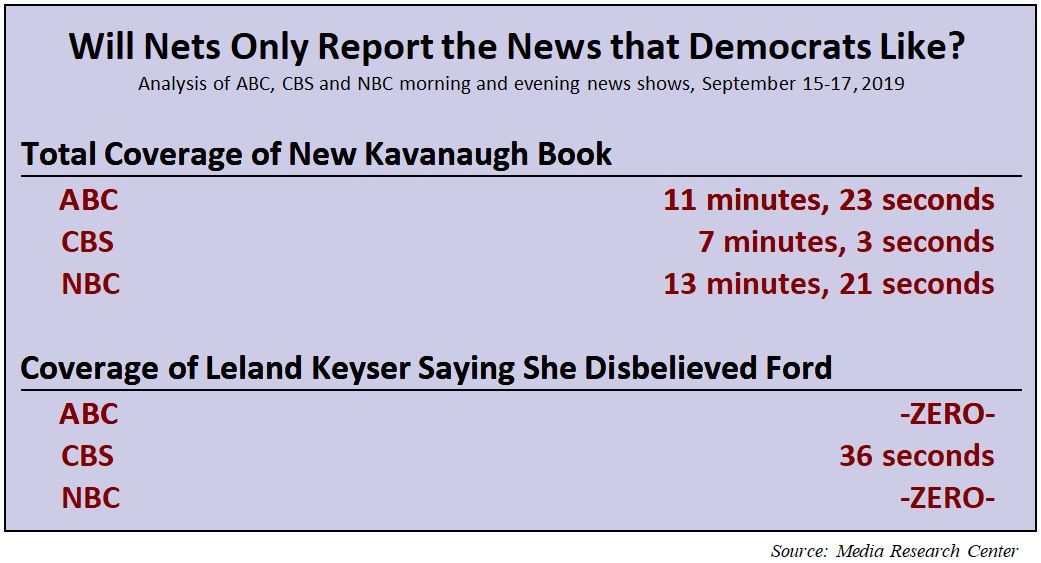 O’DONNELL: And Jan Crawford reports tonight we're hearing from a close friend of Christine Blasey Ford who Ford says was with her on the night the alleged assault happened.

CRAWFORD: Speaking publicly for the first time, to The Times reporters, Ford's close friend Leland Keyser, who Ford said was at the party, said she didn't believe Ford's account and that it “just didn't make any sense.” She also said she told the FBI that Ford's allies pressured her to say otherwise. Now, all four people that Ford identified as being at that high school party in the summer of 1982 have now said no such party occurred.

One could only speculate (based on liberal tweets attacking Crawford), but Crawford’s rogue act of journalism was not only omitted on Tuesday’s CBS This Morning, but congressional correspondent Nancy Cordes took Crawford’s place on the Kavanaugh beat.

During the Kavanaugh confirmation battle, the MRC’s Rich Noyes found that, out of 344 minutes of network coverage from September 13-24, 2018, only five minutes (or 1.6 percent) were spent on witnesses (including Keyser) who couldn’t corroborate Ford’s story.

Kavanaugh ended up back in the news thanks to that Times essay adapted from the book by Pogrebin and Kelly ahead of its September 20 release. Conveniently, the Saturday night excerpt in The Times failed to include Keyser’s bombshell.

Instead, it focused on two dubious, flimsy accounts alleging Kavanaugh flashed his genitals at an unidentified woman and Deborah Ramirez. Over 24 hours after its publication, The Times embarrassingly added a correction that the unidentified woman “declined to be interviewed and friends say that she does not recall the incident.”

As my colleague Bill D’Agostino and I noted, that addition meant little to CNN and MSNBC, who were pushing an anti-Kavanaugh narrative.

On this topic of omitting key facts, the indefatigable Mollie Hemingway argued on FNC’s Special Report that this omission was intentional (click “expand”):

I think I actually broke the news that they had not included what was in book, which is that the alleged victim of the incident had said through several friends that she does not remember any such thing. That was not included in this explosive New York Times story. It seemed relevant. And they finally added that correction late last night....I think it be absurd to think they would have added it. It seems intentional. They obscured a lot of information, including that the person supposedly making the allegation was yet another Clinton related attorney and they tried to — The whole thing is just a re-litigation of last year, where they tried to take these allegations that were made by Deborah Ramirez, which at the time, were considered so lacking in credibility that even The New York Times said that they couldn't confirm them. But now, a year later, we are supposed to believe that they are somehow credible.