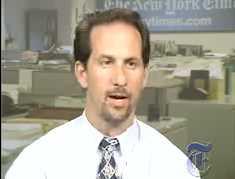 As Alexandra von Maltzan noted earlier this morning, the Times’ notorious tag team of intelligence reporters, Eric Lichtblau and James Risen, again reveal details of a terrorist surveillance program while ignoring the concerns and personal pleas from the White House.

WashPost Picks Up On MRC Study

The MRC Business & Media Institute's latest study is getting notice in the media.

The Washington Post's Frank Ahrens did a write-up below-the-fold in the business section today.

"Bad Company," the first of a three-part study series on media coverage of the American businessman is available here.

Here's a bit of what Ahrens wrote: 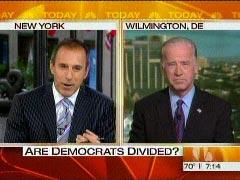 When it comes to cutting and running, John Kerry, Jack Murtha and Nancy Pelosi take a back seat to no one. But what if - quelle horreur! - the terrorist insurgents in Iraq beat them to the white flag punch?

Amidst the news of the day, from plots to bomb the Sears Tower to more Dem disunity, Jim Miklaszewski let slip this little bombshell, coming from a press conference by the top U.S. commander in Iraq, General George Casey:

By Greg Sheffield | June 23, 2006 7:18 AM EDT
Readers of the Atlanta Journal-Constitution were met with a cartoon by Mike Luckovich that compared the U.S. to Al-Qaeda, both sides referring to a book on "torture etiquette." 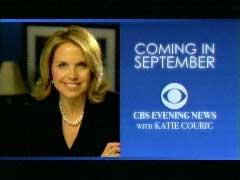 The CBS Evening News has begun to run promos for Katie Couric's impending takeover of the anchor chair. The spots feature quick cuts, from different angles, of Bob Schieffer on the Evening News set as he assures viewers of Couric's qualifications.

Of the three broadcast network evening shows Thursday night, only the NBC Nightly News reported the late Wednesday afternoon revelation by Senator Rick Santorum and Congressman Peter Hoekstra, Chair of the House intelligence committee, that an unclassified portion of a National Ground Intelligence Center report had revealed that 500 munition shells of mustard and sarin gas -- weapons of mass destruction -- had been found in Iraq. NBC anchor Brian Williams teased: “One Senator's new claim that weapons of mass destruction have been found in Iraq." Chip Reid relayed Santorum’s disclosure before downplaying the significance: “The claim quickly becomes a hot topic on cable TV and the Internet, but just as quickly Pentagon officials pour cold water on the story, telling reporters the shells are old and inactive, dating from the Iran-Iraq war of the 1980s, and that the shells are 'not the weapons of mass destruction we were looking for' when U.S. forces went into Iraq.”

MSNBC’s Keith Olbermann ridiculed the finding of “WMD: weapons of minor discomfort," snidely suggesting “you might get a burn if you rub these weapons directly onto your skin.” Olbermann condescendingly marveled: “Independent experts and the level-headed staggering in amazement tonight that deteriorated mustard gas cannisters, at least 15 years old and as much as 18 years old, could be pawned off by desperate politicians as some kind of rationale for the deaths of 2,500 American servicemen and women in Iraq.” Soon enough, Olbermann raised Joe McCarthy, asking Newsweek’s Jonathan Alter: “Have Senator Santorum and Congressman Hoekstra moved directly into the league of Joe McCarthy waving the blank page that's supposed to contain the list of communists in the 50s?" (Transcripts follow)

By Warner Todd Huston | June 22, 2006 9:12 PM EDT
Last Tuesday, Bill O'Reilly was indignant -- as were we all -- over the loss of our two soldiers who were captured and brutally murdered by terrorists in Iraq. So incensed was he that on his Tuesday show he called for stricter and stronger action against these thugs in Iraq. Etc., etc.

On Thursday, the Chicago Tribune published a guest commentary by Don Wycliff, associate vice president for news and information for the University of Notre Dame.

Los Angeles Times, Others Ignore Discovery of WMD in Iraq

Upon the recent discovery that 500 chemical weapons have been found in Iraq, Sen. Rick Santorum (R-PA), with Rep. Pete Hoesktra (R-MI) at his side, announced yesterday (Wed. June 21, 2006) some stunning news: "We have found weapons of mass destruction in Iraq, chemical weapons." If you thought such an eye-opening story would merit at least a syllable or two in today's Los Angeles Times (Thu. June 22, 2006), think again. 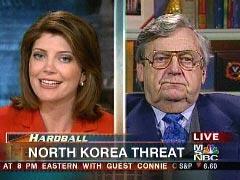 Norah loves Larry. At least, she loves the way Larry Eagleburger phrased things about North Korea. At the same time, Eagleburger made clear there's no love lost between himself and Dick Cheney, taking some surprisingly acerbic shots at the Veep.

CNN: And Now, Some Shaky Story About Finding WMDs in Iraq...

MRC intern Chadd Clark reports that CNN's "American Morning" touched on the new declassified document suggesting there were 500 WMDs found in Iraq since last year -- touched on it quickly, and with complete disdain:

What do you do when you’re a cable news network struggling to keep up in the ratings? Do you lure viewers away from your competitor with programming that they would want to watch, or alienate those same viewers by insulting their intelligence?

The latter seems to be the strategy for CNN’s Jack Cafferty. Shortly before 5pm EDT on the June 22 The Situation Room, Cafferty made this remark to substitute host John King after reading viewer responses to his question of the hour:

Cafferty: "And, and they’re pretty smart, too."

King: "Yes they are, yes they are. Thank you very much–"

Cafferty: "The dumb ones watch Fox."

The Earth is the hottest it has been in at least 400 years, probably even longer. The National Academy of Sciences, reaching that conclusion in a broad review of scientific work requested by Congress, reported Thursday that the "recent warmth is unprecedented for at least the last 400 years and potentially the last several millennia.

However, as we read on, there seems to be a bit of confusion here in whether or not the earth was this warm 400 years ago or several millennia ago, as the article goes on to revisit these quite recent temperature (historically speaking) records. Now, I ask you to consider, as you read each of these statements on the historical record of warming. Is today's global warming unprecedented?

There ought to be a Pulizter for the Headline Most Disconnected From the Attached Story. Then again, maybe there was, and the AP simply retired it years ago.

O. Ricardo Pimentel, Editorial Page Editor for the Milwaukee Journal Sentinel, writes at Poynter Online, the top site for journalists to debate their trade's issues, that reporters should refrain from using the word "illegal" to describe.... those who are here illegally.

Did you know that it's not criminal to be an undocumented immigrant? In fact, one of the burning issues in the recent and ongoing debate on immigration reform is whether to make such mere presence a felony.