Clay Waters told me I had to look at Dawn Eden's latest post on a discussion she had with a British reporter friend (apparently Harry Mount of the London Telegraph) about a story he was doing from South Dakota on abortion. The article's aerobically slanted (that is, the reporter worked so hard to be biased that he must have been winded). I love this part:

Trolling through the wire-service news on Yahoo! can be a bit of an adventure. This Agence France Presse dispatch on China's "parliament" is a good example. To the less educated among us, they might think China's a Western-style democracy. The unbylined article began with the usual liberal focus on the maldistribution of wealth:

Gabler: MSM Drinks Bush Kool-Aid by Portraying Him as Strong Man of Conviction 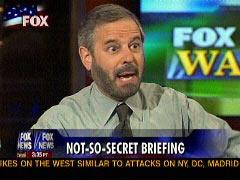 And here we thought the MSM was biased against President Bush. Wrong! On this evening's Fox News Watch, reliable lefty Neal Gabler informed us that just the opposite is true. Turns out. . . the MSM has uncritically propagated an overly positive image of the president. Who knew? 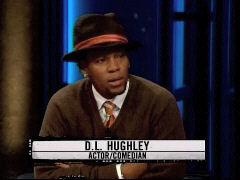 [Be advised that this item includes accurate quotations of vulgarities.] Actor/comedian D.L.

The New York Daily News is reporting (hat tip to Drudge) that film director Spike Lee has some truly unkind words for Secretary of State Condoleezza Rice in an interview he did for “Stuff” magazine. According to the article:

“Says Lee: ‘I dislike Condoleezza Rice more than [President] Bush. The thing about it is that she's gotten a free ride from black people.’"

“‘People say, 'She's so successful' and 'Look at her position as a black woman.' She is a black woman who grew up in Birmingham, Ala., and said that she never experienced a day of racism in her life,’ Lee tells the April issue of Stuff magazine.”

It appears former CNN anchor Aaron Brown is still licking his wounds. Speaking to a group in Medford, Oregon, on Wednesday, Brown suggested that the decline in television news is due to the choices being made by viewers, and that network executives are now basing their content decisions on what they believe the public wants to see versus what is really important.

As reported by the Medford Mail Tribune: “‘The news in this country is a business,’ he added. ‘You might not like to think of it that way, but it is."

“He admitted that cable news reporters and editors have failed viewers by not telling stories that are important, that truly matter.

“‘Cable indulges too often in what amounts to mud wrestling — just two people shouting at each other,’ he said.”

Then, Brown blamed the public:

Our colleagues down the hall and in Los Angeles at the Parents Television Council were not thrilled to see the Washington Post TV writer Lisa de Moraes (pronounced de-more-ice) crack wise over their study on Friday. Just check the headline: "Violence! Violence! Violence! Burps!

Who would have thought it?: in the crucial first half-hour of their respective shows this morning, Fox & Friends Weekend didn't cover the incident at the University of North Carolina in which an Iranian drove an SUV through a crowd, injuring five people - but the Today show did.

The Associated Press Friday evening published a clarification of its March 1 story regarding a controversial video of a White House briefing before Hurricane Katrina hit New Orleans. At this point, I can find no actual link to this article.

Chris Matthews: Bush "Sneaks" Into Pakistan "Like a Drug Dealer" 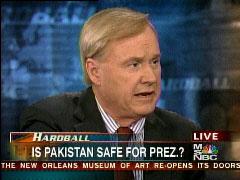 President Bush arrived in Pakistan “like a drug dealer...under cover of night,” according to MSNBC’s Chris Matthews.

Why Isn't There a Groundswell of Media and Other Protest about This "Coverup"?

By Tom Blumer | March 3, 2006 6:22 PM EST
An OpinionJournal.com editorial (registration required) about yet another layer of intelligence bureaucracy, the DNI (Directorate of National Intelligence) raises important questions about why the public has learned so little about conditions and events in pre-war Afghanistan and Iraq:

(DNI is reluctant) to release what's contained in the millions of "exploitable" documents and other items captured in Iraq and Afghanistan. 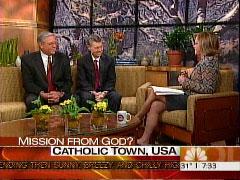 Today co-host Katie Couric savaged Dominos Pizza founder Thomas Monaghan and Paul Marinelli, CEO of Barron Collier Company (BCC). The two appeared on the March 3 edition of the show to promote Ave Maria, a new Catholic university in Florida and the planned community that will surround it. Couric, interviewing the two men at 7:34AM EST, appeared openly hostile.

Think the mainstream media has let go of its anger over the events surrounding the release of Vice President Dick Cheney’s hunting accident to the press? Judging from the tone of his comments on today’s American Morning, CNN’s senior national correspondent John Roberts certainly has not. Roberts, formerly biased over at CBS News as the MRC’s Rich Noyes reported here, appeared shortly after 8am to discuss President Bush’s speech in India. After trumpeting the latest CNN/USA Today/Gallup poll showing the job approval numbers for the President slipping, Roberts attributed the decline to a "tired" White House staff.

John Roberts: "But there’s no question that the people at the White House have, you know, they’re almost like the gang that can’t shoot straight–"

That’s when Roberts took his shot at the White House and Cheney:

Roberts: "–and when they do shoot straight, they don’t tell people about it for 24 hours. But the problem could be that they’re, they’re suffering real fatigue there, that they’re burned out, that they need to bring in some new blood."

The transcript of the segment with American Morning co-host Miles O'Brien is behind the cut.

As MRC’s Brent Baker pointed out, NBC’s Lisa Myers did a tremendously balanced report on Thursday’s “Nightly News” concerning videos of the government’s response to Hurricane Katrina. With this recent media frenzy generating a new round of finger pointing largely in the direction of 1600 Pennsylvania Ave., it seems that there is another video from around this period that is deserving of greater press coverage.

As reported by the MRC’s Brad Wilmouth on October 8, 2005, Lisa Myers did a piece for the NBC “Nightly News” on October 7 addressing a number of key mistakes that Louisiana Governor Kathleen Blanco made during this crisis which the media now seem content to ignore. In this segment, Myers played a video recorded by CNN wherein Blanco admitted that she was slow in bringing in federal troops to the area, and actually waited until Wednesday, August 31 to ask the president for this assistance. In addition, the piece specifically addressed how she and New Orleans Mayor Ray Nagin ignored warnings by experts that it would take 48 hours to evacuate the city, and, instead, after “[praying] that the impact will soften,” issued the mandatory evacuation just 20 hours before Katrina made landfall.

What follows is a transcript of this segment as transcribed by Wilmouth, along with an MSN video link (hat tip to Gary Hall). Also following is a video link courtesy of Ian Schwartz of Expose the Left of the CNN segment with Gov. Blanco. Pay particular attention to how Blanco is grilled by CNN's Miles O'Brien, and her responses.