Up front in the "Periscope" section of Newsweek, it's reported that Sen. Joe Biden, stung by all the arrows about his blah-blah-blah at the Alito confirmation hearings, suggested that perhaps Supreme Court nominees should face a murder board of liberal media inquiries instead. He suggested confirmation hearings before the Senate Judiciary Committee should just be junked:

The Times commemorates Martin Luther King day in its usual way, making it a Bush-bashing holiday.

Back in 2004, reporter Jeffrey Gettleman lit into Bush for going to Atlanta to mark the day. Here are some excerpts from his January 15, 2004 report:

The media, okay really just another reporter who hates O'Reilly, finally discovered that we aren't going to swallow everything they shovel on us without question. Another journalist admits there is plaigiarism in "every newsroom in America." The WashPost ombud admits their Abramoff coverage hasn't even begun to mention all the Democrats involved (very end of article) but that might change any minute now. Consider me holding my breath. The U.S. military saved a reporter who had been kidnapped in Iraq before anyone even knew he had been missing for 5 days (no need to thank them, they know you owe them your life.) And the media is taking heat for actually doing what the military asks of them, but only when it comes to saving one of their own.

90 members of the Hollywood Foreign Press Association love gay cowboys and transvestites far more than American movie-goers do. Chalk up another 7500 articles. Meanwhile one of the cowpokes claimed the rural bans on the movie were due to "racism". Calls to determine what part of the world the "gay race" migrated from went unreturned.

Wishy washy mayor Ray Nagin said hurricanes are messages that God is mad at us for being in Iraq, and that New Orleans will be "chocolate" again (is that what you call it?) Don't worry, the media will only portray Pat Robertson as crazy for purporting to know what God is thinking.

There were no Democrats involved with the Abramoff probe? After reading the latest online NYT assesment of the facts, you'd think that.

On "Good Morning America" today, the 8 AM newscast had a few embarrassing errors. News anchor Kate Snow stumbled as she explained that today's NASA mission to Pluto will be powered by "24 pounds of plutonium" -- "I'll have to check that," she said as she read through it. (Doesn't she read through the news a time or two before taking the newscast on air?) At newscast's end, she said my bad, yes, it's 24 pounds. Obviously, Kate Snow is literally not a rocket (or nuclear) scientist. 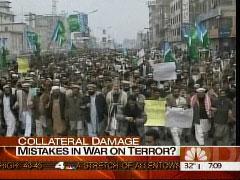 The demonstrators' signs read "Withdraw the Terrorist US Army", so naturally I assumed it was a DNC event, perhaps with John Kerry and Al Gore leading the way. But no, turns out that for the second day running the Today show devoted an extended first segment to the attempted strike on Zawahiri and the harm it might have done to our relations with Pakistan.

NBC, CNN & Wash Post Yet to Correct Kennedy’s Smear of Alito Based on Satire

FNC’s Brit Hume on Monday night picked up on how, in trying to smear Supreme Court nominee Samuel Alito as a bigot, Senator Ted Kennedy, in a quote showcased by many media outlets, read from what was really a satire. Hume noted how at the hearings last week Kennedy read this from a magazine published by Concerned Alumni of Princeton (CAP): “People nowadays just don't seem to know their place. Everywhere one turns, blacks and Hispanics are demanding jobs simply because they're black and Hispanic.” Hume informed his viewers: “But the magazine's editor at the time says the article was pure satire, a send-up of what liberals think conservatives think. He added quote, 'I think left-wing groups have been feeding Senator Kennedy snippets and he has been mindlessly reciting them,' unquote." As Tim Graham noted in a Friday NewsBusters item, in his ABCNews.com blog that day, Jake Tapper first reported how Dinesh D’Souza, the editor to whom Hume referred, had let him know that the 1983 piece in Prospect magazine was satire.

Last week, NBC, CNN and the Washington Post -- amongst many other outlets -- highlighted Kennedy’s reading of the quote, which he displayed on a board behind him, yet none, as far as I’ve observed, have offered any clarification. NBC’s Pete Williams featured the Kennedy soundbite on Wednesday’s NBC Nightly News and Thursday’s Today; CNN’s Bob Franken recited it himself on Thursday’s American Morning; and two Thursday Washington Post stories quoted Kennedy’s citation of the quote. (Rundown follows.)

NBC and ABC on Monday night gave time to short items on Al Gore's charge, leveled during a morning speech, that President Bush's “domestic surveillance” means he “has been breaking the law repeatedly and insistently." And MSNBC's Countdown led with it as host Keith Olbermann showcased a clip of Gore with his allegation before Olbermann insisted: "Just more old-fashioned partisanship? Not when it's Bob Barr joining Gore in the same complaint about NSA spying. Not when it's Arlen Specter calling for a full investigation." Seeing great import in the Gore-Barr alliance, Olbermann ruminated about how “the creations of the last two serious third political parties in this country define the cliche politics makes strange bedfellows.” Seemingly suggesting a potential repeat scenario, Olbermann recalled how in 1854 Republicans “started as a third party with disaffected Democrats abandoning their own sitting President and the Whigs, who had been in office until a year earlier, deserting en masse, putting aside their personal hatreds to create a one-issue party against slavery.”

NBC anchor Brian Williams relayed how “Gore made some of the toughest charges yet from a prominent Democrat. He called for an independent investigation of the NSA spy program which he called a threat to the very structure of our government." After a clip of Gore's declaration, “What we do know about this pervasive wiretapping virtually compels the conclusion that the President of the United States has been breaking the law [rising applause] repeatedly and insistently," Williams offered no contrary view and then passed along how "Al Gore noted that he gave the speech on Martin Luther King Day because Dr. King himself had been a victim of illegal domestic spying by the FBI." But in holding the FBI accountable for the “spying,” Williams obscured who was behind it: Liberal heroes Lyndon Johnson and Robert Kennedy. ABC anchor Elizabeth Vargas at least pointed out that while “Gore called for an independent counsel to investigate the program,” it's a policy “which the administration has said is, in fact, legal." (Transcripts follow.)

NYT: No Free Speech at Ground Zero Because Left-Wing Museum Had to Move?

A Saturday New York Times editorial, “A Home for the Drawing Center,” celebrates the fact that a left-wing museum, originally to be located at Ground Zero, has found a new home in Manhattan, and accuses opponents of the project of opposing free speech.

By Lyford Beverage | January 16, 2006 1:05 PM EST
Winston Churchill was once quoted as saying that "a fanatic is one who can't change his mind and won't change the subject." Whether it's an actual Churchill quote or not, I'm not certain. I am certain, however, that it's an apt description of the Associated Press. They are, and have been, obsessed with the Bush administration's war on terrorism, and have repeatedly gone out of their way to drag in unrelated items to use as clubs against the Bush administration. I tire of writing that "the AP is at it again," but the AP is at it again.

Feinstein: "Alito Qualified" - "I Vote No" Yesterday on Face the Nation Bob Schieffer asked Dianne Feinstein if she would support a filibuster. Despite the fact that she said Alito was "qualified", Feinstein has allowed her politics to dictate a "no vote" for Alito as she said that there most likely wouldn't be a filibuster. 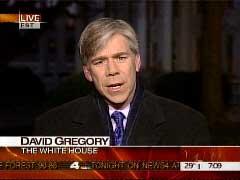 When the administration tried to buck up troop morale by warning that some of the war's critics go too far, NBC's David Gregory had a hissy fit and portrayed the administration as the thought police. On this morning's Today Matt Lauer introduced Gregory's piece that aired in the 7am half hour: "On Close Up this morning is all fair in love and war? Not according to President Bush.

Just a heads up for a great piece on the New York Times’ latest entry into the “liberal phony photo-journalism posing as editorial content” category.