Reporter turns to liberal-activist-on-the-street, says it takes 200 years to get into the middle class.

Geoff Dickens had the low-down first on Chris Matthews smiling through kooky Green Party gubernatorial candidate Malachy McCourt's talk about how he'd favor execution if the criminal was Pinochet or George W. Bush. It must depend on which politician is being criticized. On August 19, 2004, when columnist Michelle Malkin suggested it was possible John Kerry may have wounded himself in Vietnam, Matthews huffed after Malkin was evacuated, "We're going to keep things clean on this show. No irresponsible comments are going to be on this show."

After Matthews pounded Malkin on how the Bush campaign should force the withdrawal of the Swift Vet ads, it was comical how out of control Matthews became. He wouldn't let Malkin speak for more than a few seconds without interrupting with outrage. See how very different Malkin was treated, compared with the execute-Bush joker. San Francisco Mayor Willie Brown argued there was no question Kerry was shot in Vietnam, so what else was there to ask?

Video clip of Matthews pouncing on Malkin as he deliberately misconstrued her assertion Kerry suffered a “self-inflicted wound” to be an accusation “he shot himself on purpose” (2:10): Real (3.7 MB) or Windows Media (4.2 MB), plus MP3 audio (650 KB) [Transcript follows.]

ABC's Path to 9/11- Still Being Edited? Bowing to Dem. Pressure?

By Warner Todd Huston | September 7, 2006 3:58 PM EDT
Rush Limbaugh revealed that ABC has reported that the mini-series, Path to 9/11, is still being edited only two days before its air date. This likely means that the producers of the film are bowing to Democrat Party operatives' pressure to edit the film even at this late date.

As mentioned in my earlier Newsbusters posting, all of this flurry of edits are at the behest of Democrats who are "outraged" over the fact that the Clinton administration looks so bad in this film.

Once again, here's a dramatic picture of our press, embedded with the enemy as usual. Notice, however, how many "innocent civilians" this man is surrounding himself with, while firing at Israeli troops. The Israelis, of course, will not fire back, as the likelihood of them hitting any number of people behind this coward is too high. Our cowardly photojournalist, of course, reports the official terrorist line:—11 "unarmed" Palestinians were injured. (Note: Content has been re-written now that I've cooled off some.) 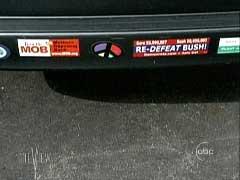 Rosie O’Donnell used the Sept 7 edition of "The View" as a platform to show off her "get rid of the President" bumper stickers and to mock her partner’s "rabid Republican" parents. The new co-host also mentioned that she enjoyed annoying her mother in-law:

Barbara Walters: "How are your in-laws?

In Other News, Sky Is Blue

In case you're wondering why the cartoons in the Atlanta Journal Constitution are so slanted, one need only look at this interview with Pulleftist Prize-winning cartoonist Mike Luckovich.

You've satirized numerous presidents. How's this presidency different?
Previously, whether I was dealing with a Republican or a Democratic president, I always felt that they were kind of up to the job, basically. And this president, to me, doesn't seem that way at all. It's very scary to me that he occupies the office.

That doesn't sound so impartial. Are you a Democrat?
I am...

Some of your cartoons are kind of dark.
We're in a dark time in history now. The country is needlessly divided.

Four would-be committee chairmen, all Democrats in the House of Represenatives, just sent ABC a letter demanding that the network review its upcoming miniseries, "The Path to 9/11." No overtly threatening language is used in the letter (reprinted below the fold) but the implication seems pretty clear: If Dems take control of the House in November, ABC should expect hell from the various committees John Conyers, John Dingell, Jane Harman, Louise Slaughter head.

Which party was it that advocates censorship of "incorrect" speech again?

By Dave Pierre | September 7, 2006 1:21 PM EDT
In an exclusive report, the Radio Equalizer, Brian Maloney, has published that Doug Kreeger, a board member who has been with Air America Radio since its earliest days, has resigned from its parent company, Piquant LLC. Maloney credits the find to "an internal source."

That's the question posed by a CBS News/New York Times poll, which interprets the results as criticism of the Bush administration's handling of the War on Terror:

Thursday’s off-lead story in the New York Times on a new CBS/NYT poll, “9/11 Polls Find Lingering Fears in New York City,” dwells on the fears that remain five years after the terrorist attacks in Manhattan and at the Pentagon.

A few months back, 9/11 widow Kristin Breitweiser suggested that former CIA Director George Tenet and named FBI agents are as deserving of the death penalty as Zacarias Moussaoui. You might think that with opinions such as those, Breitweiser had made her liberal bones. Apparently not enough to suit Ann Curry's taste. On this morning's Today show, Curry found Breitweiser's comments on Ann Coulter insufficently bitter, and tried to lure her into even a more avid condemnation of the conservative commentator.

Curry began with this bouquet: "From your grief, you have drawn strength. You have given that strength to us." Ann, I'd say that even before Kristin came along you and your MSM colleagues had all the strength necessary to bash the Bush administration.

Later, it was on to Curry's Coulter-bashing invitation:

"Conservatives as you well know have attacked -- criticized heavily 9/11 widows, including you, for some of what you've said over the years, over these five years. In fact, on this program, Ann Coulter, the writer, said something to Matt Lauer." Today then played the clip of Coulter saying "these broads are millionaires, lionized on TV and in articles about them, revelling in their status as celebrities and stalked by griefarazzis, I've never seen people enjoying their husband's deaths so much."

When Breitweiser decided to take the high road, offering 'kudos' to Coulter for having her 'voice heard' and being 'engaged in the political process,' Curry reacted in horror:

Top officials of the Clinton administration have launched a preemptive strike against an ABC-TV "docudrama," slated to air Sunday and Monday, that they say includes made-up scenes depicting them as undermining attempts to kill Osama bin Laden.

The Daily Kos is currently in an uproar over ABC's The Path To 9/11 as you can see in the current edition of the DUmmie FUnnies. Their big objection to this movie is the portrayal of the Clinton administration not taking the terrorist threat seriously. Well, guess who recently wrote off the terrorist threat as nothing but a bunch of Republican fear mongering?

Here are some of the headlines actually used in coverage of Tuesday's Office of Federal Housing Enterprise Oversight (OFHEO) report (PDF) showing a 1.17% increase in second-quarter home prices:

Here is context missing from the reporting. The table below shows quarterly, annualized quarterly, and previous four-quarter home price increases during the 1990s, before 2000's bubble economy and the post-September 11, 2001 interest-rate declines sparked a few years of strong home-price growth followed by a two-year-plus price boom: