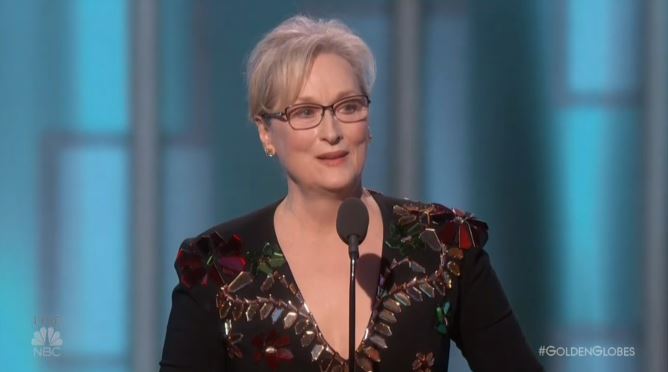 Behold, readers. Here is another reason why the fact-checking phenomenon is junk: On Monday afternoon, the Associated Press (AP) published a story by Mark Kennedy to “fact-check” President-elect Donald Trump’s opinion that far-left actress Meryl Streep is “overrated.”

Kennedy’s piece naturally came the day after Streep’s tirade at the Golden Globes attacking Trump and his millions of supporters who enjoy football and Mixed Martial Arts (MMA).

Clocking in at just over 300 words, Kennedy’s lede laid out the facts I just outlined before undermining himself in admitting that what Trump said was an opinion (instead of, you know, a claim of fact that would normally be fact-checked).

“While ‘overrated’ is an opinion, Streep, who took aim at Trump in her speech while accepting the Globes lifetime achievement award, holds the record for the most Academy Award nominations of any actor. She has earned 19 Oscar nominations and three wins, as well as a record 29 Golden Globe nominations and eight wins, and two Emmy Awards,” Kennedy countered.

Kennedy continued with his wimpy takedown of Trump by citing more of Streep’s past accolades:

Only at the end did Kennedy note that Streep stumped for Hillary Clinton in the presidential campaign. He also cheekily noted that while Streep has numerous awards, Trump received an award for “worst supporting actor” in 1989 (known as the Golden Raspberries) for the film Ghosts Can't Do It.

Thankfully, a number of media writers similarly flagged down this absurdity from across the political spectrum. The Washington Examiner’s T. Becket Adams wrote it up and concluded that “everyone and everything has lost its damn mind” while even Business Insider’s Josh Barro had some concerns:

Checking facts is a key part of journalism. If politicians are making incorrect factual claims, journalists should correct them in the ordinary course of reporting stories.

The problem with the "fact-check" operations set up by various news outlets is that they invariably seem to mission creep beyond looking at facts, into evaluations of analyses and predictions and opinions.

Some predictions are solid and some are foolish. Some analyses are better than others. I definitely think that some opinions are stupid. But these are not matters for the fact-checker.

When fact-checkers get into these questions, they reinforce the idea that media outlets are putting their thumbs on the scale, and trying to brand certain ideas as "false" when they aren't really true or false at all.

I can’t believe I’m saying this, but Barro couldn’t have said it any better. Here’s a pertinent exit question thanks to the New York Post’s Kyle Smith:

Hey Associated Press can I get a fact-check on other things Trump thinks are overrated? Like the independence and objectivity of the media?