In yet another hilarious moment on MSNBC that rivals Kerry Sanders at a gun range, correspondent Chris Jansing had the f-bomb dropped in her direction Monday afternoon when she messed up the camera shot at the start of a Bernie Sanders press conference.

Afternoon MSNBC Live host Thomas Roberts tossed to Jansing at the Sanders event by asking what the format would be and if it would revolve around a particular topic when Sanders stepped to the mircophone.

“He's taking to the stage so let's go to him, but we do expect him to take open questions. This is his sixth press conference in seven days. Let's listen,” Jansing explained in a hushed tone.

As she stepped out of the shot, a voice that appeared to have been her cameraman took issue with Jansing as he had set it up that he would be over her shoulder: “What the fuck? Dude, why’d you step out of camera? He was already over your shoulder.”

The obscenity on MSNBC comes within a year of some other colorful moments on the cable network that included Sanders at the gun range to reporters chasing Hillary Clinton’s van to reporters rummaging through the apartment that the San Bernardino terrorists lived in.

The relevant portion of the transcript from MSNBC Live on June 6 can be found below. 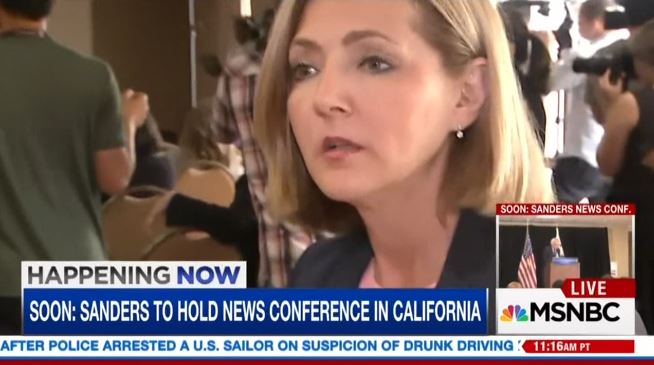 THOMAS ROBERTS: I want to go to our colleague, MSNBC’s Chris Jansing. Chris Jansing has been following the Sanders campaign, joining us now outside of San Francisco, just moments ahead of Bernie Sanders and taking questions from reporters. Chris, he's had a theme almost every day of a certain topic that he'll talk about. Do we have any direction or indication of what he wants to speak about today? Or is it kind of open question forum?

CHRIS JANSING: He's taking to the stage so let's go to him, but we do expect him to take open questions. This is his sixth press conference in seven days. Let's listen.

MSNBC CAMERAMAN: What the fuck? Dude, why’d you step out of camera? He was already over your shoulder.