Among the more intriguing results from Tuesday’s primary contests, the crowded race to fill the heavily-Democratic Eighth Congressional District in Maryland featured none other than the wife of Hardball host Chris Matthews whose candidacy included accusations that the couple leveraged their coziness with the D.C. and Hollywood elite for campaign donations.

Unfortunately, MSNBC made no mention of this race during their live results coverage when polls closed at 8:00 p.m. Eastern until 1:00 a.m. Eastern and along with the MSNBC personality being absent from the coverage due the the campaign but, most importantly, that Kathleen Matthews finished in third.

As of this writing (around 2:20 a.m. Eastern), far-left Maryland State Senator Jamie Raskin was the winner at 33.7 percent followed by  Total Wine & More founder David Trone at 27.3 percent and Matthews behind them at 23.8 pecent.

Matthews was name-checked by co-host Brian Williams as being "off tonight attending to family business" at the top of the 6:00 p.m. Eastern hour, but it was never disclosed to any uninformed viewers that the reason had to due with Kathleen's campaign.

Perhaps even worse, All In host Chris Hayes referenced the race for the Democratic nomination to replace senatorial candidate Chris Van Hollen late in the evening and the top two finishers but not the network’s personal connection to it.

After Hayes and co-host Rachel Maddow discussed the boost that senatorial candidate Katie McGinty received in Pennsylvania from the Democratic Party establishment, Hayes made the lone reference to the Maryland district as a case where power and money didn’t pan out with Raskin besting Trone:

That wasn’t the case in, say, a place like — um, for instance, Maryland’s congressional district, Van Hollen’s vacated seat where it looks like Jamie Raskin, I believe, is in the lead right now, where someone who had spent $12 million, dropped a lot of money and wasn't able to win the seat, so the voters ultimately get a say on Election Day.

For what it’s worth, MTP Daily host Chuck Todd alluded to the race during his 5:00 p.m. Eastern show with the top candidates being Matthews, Raskin, and Trone. However, this came well before the polls closed and the final tally was revealed.

The relevant portion of the transcript from MSNBC’s The Place for Politics 2016 on April 26 can be found below.

RACHEL MADDOW: And you are seeing that in the Joe Sestak-Katie McGinty race in the Pennsylvania Senate. For reasons that are both, Pennsylvania specific and personality specific, we saw a huge out-powering of establishment support for Katie McGinty in that primary race up to the Vice President campaign for her directly. 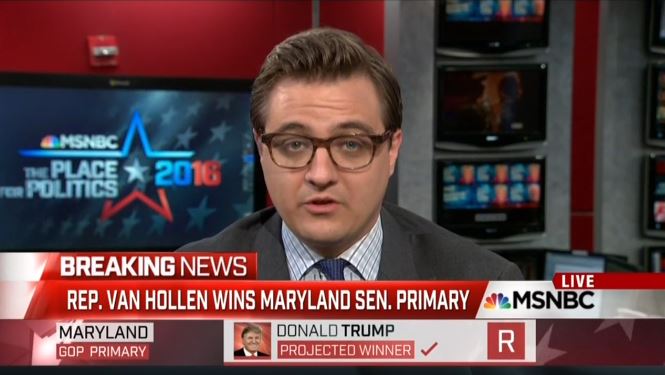 CHRIS HAYES: She was the ultimate connected insider. I mean, she came out of the Gore folks — the Vice President. She’s the chief of staff of the governor, so this is someone, absent those connections, it would have been hard to see her in the position that she is in, but ultimately, she was able to use those to propel her to a victory among the actual voters who’s say matters in the end. That wasn’t the case in, say, a place like — um, for instance, Maryland’s congressional district, Van Hollen’s vacated seat where it looks like Jamie Raskin, I believe, is in the lead right now, where someone who had spent $12 million, dropped a lot of money and wasn't able to win the seat, so the voters ultimately get a say on Election Day.