ABC’s Llamas to Cruz: ‘How Can You Be a President’ If You ‘Hate’ Democrats, ‘Culture of Washington’

While interviewing Republican presidential candidate Ted Cruz for the Wednesday edition of ABC’s World News Tonight, Republican campaign correspondent Tom Llamas demanded Cruz explain how he could “be a president and hate the Democrats and hate the culture of Washington so much and be effective.”

Before Llamas’s question to Cruz, he remarked in his report that “some Republicans worry Cruz is too polarizing, too unwilling to compromise with Congress to win in a general election.”

Cruz responded to the liberal-learning question by flatly denying that he’s ever said he hates Democrats and instead: “It’s Hillary Clinton who describes her, quote, enemies, as Republicans, as half of the country she considers her enemies. I don't hate the Democrats.”

Along with Llamas presenting the premise to Cruz that he might not able to be president since he doesn’t put his head down and get in line with the government-dependent culture in Washington, ABC was joined by the CBS Evening News and NBC Nightly News in entertaining the notion that Cruz’s eligibility for president is up for debate (thanks to Donald Trump).

On CBS, congressional correspondent Nancy Cordes hyped that there’s no Supreme Court precedent for what constitutes a natural-born citizen (thus able to run for president):

Legally, it isn't entirely settled because the Supreme Court has never weighed in on the matter, but two past GOP nominees, John McCain and Barry Goldwater, were also born outside the states to American parents, Scott, and neither of them faced any serious legal challenge.

Appearing on NBC Nightly News, a soundbite from Justice correspondent Pete Williams similarly affirmed in a segment filed by correspondent Hallie Jackson: “The Constitution doesn't define natural born, the Supreme Court has never ruled on it, but most of the legal experts agree it means citizen by birth and that would include Ted Cruz.”

Jackson warned that while Trump “dipp[ed] a toe in the rocky waters, testing the temperature of his supporters who also like Cruz, he scores higher with potential Trump voters than any other Republican,” she argued that “Trump’s getting the green light from influential radio hosts.”

Jackson then trotted out a very brief soundbite from Rush Limbaugh on his eponymous syndicated talk radio program on Wednesday without any sort of larger context to the multiple segments Limbaugh devoted to this: “But as far as Trump hitting Cruz or vice versa, have at it, boys.”

Later at the conclusion of her piece, Jackson assured viewers that birtherism has been a reoccurring campaign issue in American politics for over a century:

The candidates have stayed strategically friendly but even tonight ,Donald Trump is amping up attacks against Cruz on immigration. If there is a full on fight between the two, it might be on that more than than eligibility. Birther attacks, by the way, Lester, have been around since the days of Chester Arthur, not new to politics and not new for Trump.

The transcript of the segment from ABC’s World News Tonight with David Muir on January 6 can be found below. 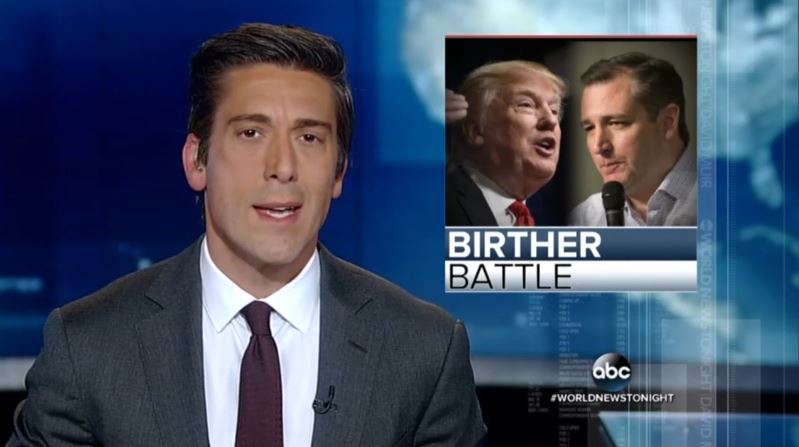 DAVID MUIR: Now to the race to 2016 tonight, and Donald Trump, who once famously questioned whether President Obama was born in the U.S. is now bringing up similar questions about his closest challenger. Ted Cruz, currently leading Trump in some polls in Iowa, now coming under attack. Donald Trump reminding voters Cruz was born in Canada and when Trump was asked today, do you believe Senator Cruz is a natural born citizen, Trump left it wide open. ABC's Tom Llamas, one-on-one with Ted Cruz tonight for his response.

LLAMAS: Trump warning Democrats will make an issue of the fact that Cruz was born in Canada.

LLAMAS: In Iowa today, Cruz, whose mother is an American citizen, firing back.

REPUBLICAN SENATOR TED CRUZ (Tex.): The child of a U.S. citizen born abroad is a natural born citizen. People will continue to make political noise about it, but as a legal matter, it is quite straightforward.

LLAMAS: Trump famously used the birther issue against President Obama, challenging him to prove he wasn't born in Kenya. But just last year, Trump himself told ABC News that Cruz doesn't have a problem.

TRUMP [on 09/09/15]: It's fine. I hear that it was checked out by every attorney and every which way and I understand Ted is in fine shape.

LLAMAS: But back then, Cruz was trailing badly. Tonight, some polls have Cruz leading in Iowa, and we were one-on-one with him on his campaign bus, asking about Trump. [TO CRUZ] Now he's talking about, you know, that you were born in Canada, not criticizing it, but saying you could have problems with that. Why do you think he's doing that?

CRUZ: Oh, look. I'm not going to try to psycho analyze Donald Trump. My view, if —

LLAMAS [TO CRUZ]: Because he sees you as a threat?

CRUZ: You'd somewhere to ask him that. 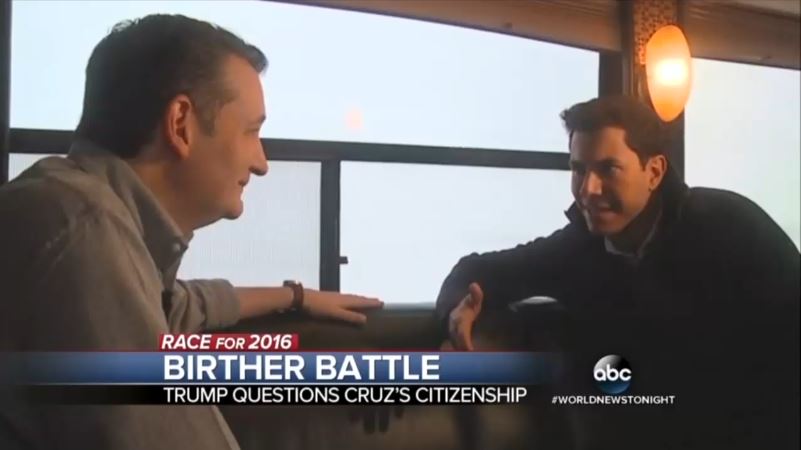 LLAMAS: Cruz is trying his best to ignore Trump's attacks. The fiery Texas Senator energizing Iowa Republicans and his conservative base. We were there when a woman broke down in tears, just talking to him. But some Republicans worry Cruz is too polarizing, too unwilling to compromise with Congress to win in a general election. [TO CRUZ] How can you be a president and hate the Democrats and hate the culture of Washington so much and be effective?

MUIR: And now Tom Llamas off the bus tonight, and live with us from Iowa, and Tom, Donald Trump suggesting that Cruz go to court to clear up this issue of citizenship?

LLAMAS: That's right, David. Trump now saying, a judge could put this whole issue to bed, but Senator Ted Cruz is not taking the bait. He just got off his bus and I just asked him again for a second time, but he says, this issue is settled. If he's elected, he can become president. David?

MUIR: Tom Llamas with us tonight after his one-on-one with Ted Cruz. Tom, thank you.