Seeking to boost President Barack Obama and backers of the Paris climate change summit, the “big three” networks of ABC, CBS, and NBC devoted on Monday night over 15 minutes of airtime across six segments touting the summit, a Discovery Channel documentary on climate change, a hashtag campaign, and climate scientists in the Arctic Circle -- to name a few examples.

Leading the way toward the 15-minute-and-14-second total (without teases) was the CBS Evening News, which started with the topic on its Monday broadcast and included anchor Scott Pelley cheering “the unprecedented global summit meeting” and a friendly poll of their own to back the climate change advocates.

Prior to the first report from correspondent Margaret Brennan in Paris, Pelley declared:

In Paris today, President Obama warned that the world is fast approaching the hour when it will be too late to save the planet from climate change....he told 151 heads of state and government that a deal to cut carbon emissions would be an act of defiance against terror. In our new CBS News/New York Times poll, 66 percent of Americans said the U.S. should join an international treaty to reduce emissions. When asked whether it's more important to protect the environment or stimulate the economy, 54 percent chose the environment, 34 percent the economy.

After summarizing the President’s day at the summit, Brennan noted that “[a]ny agreement won't be legally binding and it doesn't require congressional approval, but Republicans have threatened to withhold funding for a deal.”

The full-court press continued with China-based correspondent Seth Doane covering the visibly-disturbing amounts of smog in the capital of the world’s biggest polluter and ended with Pelley going to senior foreign correspondent Mark Phillips profiling climatologists in Svalbard, Norway as they chart “a worrying trend that's happening now” with trapped methane gas said to be now be leaking from the world’s frozen tundras into the atmosphere.

“The worry is with arctic temperatures rising more quickly than anywhere else, the gasses may be escaping at an increasing rate, and the more greenhouse gasses, the more global warming,” Phillips exclaimed. 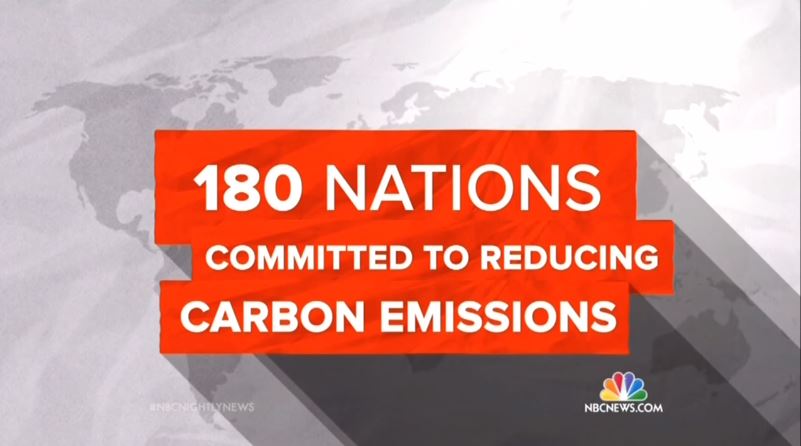 Offering no sort of opposing viewpoint, Phillips touted a college student studying there who ruled that “[w]hat the climate change debate needs, she feels, is more science” and “[a] solid argument” to rebut “the uncertainties” of “climate change deniers.”

NBC Nightly News deployed a nearly-identical strategy with two reports adding up to five minutes and 26 seconds harping on the summit and an upcoming Discovery documentary by filmmaker Louie Psihoyos on a “mass extinction” due to climate change.

Anchor Lester Holt kicked things off by remarking that Paris was “remarkably playing hosts to the biggest gathering of world leaders ever” weeks after the Islamic terror attacks and was quickly followed by senior White House correspondent Chris Jansing’s fawning assessment of the summit: “There’s never been anything like it. 150 world leaders under one roof, in high-stakes talks targeting climate change.”

After a commercial break, correspondent Cynthia McFadden continued her advocacy of the issue by giving free P.R. to Psihoyos’s upcoming documentary arguing that the largest mass extinction is underway due to humans causing a boost in “carbon emissions, the destruction of forests, and the over-hunting.”

Just when the cheerleading couldn’t be any more blatant, McFadden ended her segment by touting an “educational campaign” by Microsoft co-founder Paul Allen and encouraging viewers to search for an accompanying Twitter hashtag:

A crisis he said humans have caused and humans must fix. To that end, one of the richest men on the planet, the co-founder of Microsoft, Paul Allen, and his Vulcan productions are spearheading a educational campaign around the film, a call to action, if you will. We have more about that campaign online at #justonething on our website.

Anchor David Muir also hailed the gathering as an “unprecedented climate change summit” while Karl continued totting the liberal media’s narrative that the summit “has been overshadowed” by the November 13 attacks in Paris and a focus on security with the city’s streets largely shutdown to traffic.