Where Are The Apologies And/Or Retractions From the Washington Post and the NY Times?

Both the New York Times and the Washington Post reported yesterday that the levees in New Orleans were not overtopped by flood waters related to Katrina. Instead, as was reported by NBC News on September 29, and here on September 30, these levees broke due to construction failures related to the instability of the soil beneath them. Moreover, one of the contractors involved in their construction warned the Army Corps of Engineers about this problem in the early ’90s, but these cautions were ignored.

As yesterday’s Times article stated: “The engineers said the findings, which they warned were preliminary, raised questions about the design of the levees and the testing of the relatively fragile soil during the construction of the walls. They also said that on the 17th Street Canal, the source of the flooding in much of the main part of the city, the flood wall broke in an area where a contractor had complained to the U. S. Army Corps of Engineers that the soil that anchored the wall was dangerously soft.”

And, yesterday’s Washington Post stated: “In the early 1990s, a New Orleans-based contractor filed a legal claim against the Corps alleging that the soil beneath the floodwall on the 17th Street Canal was poor. A judge dismissed the contractor's complaint in 1996.”

These revelations raise an interesting question: Why aren’t the Times and the Post apologizing to their readers for and/or retracting earlier reports by their respective papers that the levee problems in New Orleans were caused by budget cuts implemented by President Bush?

Berger the 'Sock Stuffer' Called as Character Witness for Clinton

Tonight on CBS's 60 Minutes, former FBI Director Louis J. Freeh will be on to talk about his new book, "My FBI", which will apparently include a charge by Freeh about Bill Clinton, Saudi Arabia, and funding for Clinton's Presidential Library.

During the roundtable segment on Sunday’s This Week with George Stephanopoulos, ABC reporter Cokie Roberts charged that “I do think there's sexism here” and went on to approvingly cite a left-wing Democratic Senator: “I do think that there is a degree of sexism, as Barbara Mikulski has also said, and I do think that there is a certain Ivy League prejudice going on here.” Roberts contended that Miers’ “experience on the Dallas city council showed her to be a great pragmatist and that's what people are really worried about." Roberts soon gushed: “Praise the Lord she doesn't have a judicial philosophy." She cited Justice O’Connor’s approach as desirable: “You're presented with a case on the Supreme Court instead of an argument, and you decide the case and that's exactly what Sandra Day O'Connor did and that's exactly what makes conservatives angry."

When former Clinton Labor Secretary Robert Reich suggested that “a lot of conservatives are worried that she is going to be another David Souter,” Roberts interjected: "A pragmatist." (So, Roberts sees the liberal Souter as merely a "pragmatist"? Or, maybe she was trying to correct Reich and just meant that conservatives are upset not by how Miers will be another Souter but by how Miers might be another "pragmatist.") She also lamented how “the people who are complaining about this didn't complain about Clarence Thomas, who was hardly a distinguished jurist when he was picked for the bench." To that, George Will shot back: “He was, however, a jurist on America's most distinguished appellate court.” (Transcribed excerpts from the October 9 This Week follow.)

Matthews Stocks Panel This Week For a Rove Bash-a-Thon

Even though the big news event this week was the president’s nomination of Harriet Miers to replace retiring justice Sandra Day O’Connor on the Supreme Court, NBC’s Chris Matthews this morning, on a show that bears his name, chose to lead with Karl Rove’s upcoming testimony in front of a grand jury.  To assist him, Matthews stocked his panel with the likes of Andrea Mitchell, Clarence Page, Judy Woodruff, and a lone “conservative” voice, Howard Fineman.

In Sunday's Washington Post, journalist Brian Faler provides what can only be described as a fawning push-piece aimed at exciting the liberal activist and elite--both state and nation-wide. 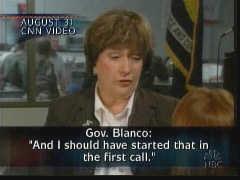 On the Saturday edition of the NBC Nightly News, anchored by John Seigenthaler, correspondent Lisa Myers reported several critical mistakes made by Louisiana Governor Kathleen Blanco in handling the Hurricane Katrina crisis. The story even showcased a whispered conversation, recorded by CNN, between Blanco and an aide in which Blanco admitted she had been too slow in asking for federal troops.

Bush Sees Self as Executor of Divine Will?

The BBC is planning to run a series proving that Christianity has turned Bush into a deranged lunatic, according to one story written by Rupert Cornwell for The Independent.

Hillary Knew, David Rosen Knew -- Only the Post Reporter Was in the Dark

The Washington Post has run an extended whitewash of dishonest conduct in Hillary Clinton’s 2000 campaign for the Senate from New York. The article, “House of Cards,” ran today, 8 October, 2005. The money quote, the one when Tom Sawyer really slaps the white paint on the fence, is in the 14th paragraph:

Famed BBC reporter David Frost announced yesterday that he has joined a new English-language version of the Qatar-based al-Jazeera network.  As

Charles Krauthammer has called the Miers nomination a "joke."

George Will called her "the wrong pick."

David Frum suggests she is "not good enough."

So what are these folks up to? Well, to listen to Ellen Ratner, of Fox & Friends Weekend "Long & Short of It" feature, they are consciously . . . lying.

The November issue of Ladies’ Home Journal (circulation: 4.1 million) arrived in the wife's mail, and it has a cover story/interview with Bill Clinton by Editor-in-Chief Diane Salvatore. Most of the questions up front are about eating and nutrition and obesity prevention, and Hillary's ability to scarf a dozen chocolate donuts as a stress reducer when they were dating.

MSNBC viewers are used to seeing Hardball host Chris Matthews take on Republicans from the left, but in a new twist, he'll being doing the same this weekend on NBC's Sunday drama, The West Wing. As shown on Friday's Hardball, Matthews plays himself in a scene in which the “Josh Lyman” character, the campaign manager for imaginary left-wing Democratic presidential candidate “Matt Santos” (played by Jimmy Smits), cheers on Matthews for his questions to “Arnie Vinick,” the very un-conservative Republican presidential candidate played by Alan Alda. “Lyman” exclaims, "Yeah, welcome to Hardball, Arnie!" and "Chris, baby, keep slugging!"

Following the preview, MSNBC aired a taped interview by Matthews with Alda from the West Wing set. Matthews conceded “the script was written for me,” but he that he “thought it was really smart.” Matthews applauded Hollywood's ideal GOP candidate: “You come off as kind of a Giuliani guy. You're for abortion rights, but you don't like the idea of partial birth. You're kind of a maverick Republican, you're from California. You shine your own shoes. What an interesting guy you are.” Matthews admired how “your character this last season [said] he'd studied the Bible...and you just couldn't go along with having people die because they didn't go to church or didn't honor the Sabbath, but yet slavery was okay in the Bible back in those days.” Matthews fretted: “It's a very thoughtful sort of inquiry, but do you think a guy like that could ever be elected President in this church-going country of ours?"

Indeed, as recounted in an April MRC CyberAlert item: “Hollywood's ideal Republican President, as brought to life two weeks ago by NBC's The West Wing, is 'pro-choice,' 'pro-environment,' will save the party from the 'right wing,' engineers a deal to raise the minimum wage and lectures about keeping religion out of politics.” (See full rundown below)

Newsweek's Fineman on DC's Guess: "Repubs Are Going to Get Whacked Next Year"

In one of Newsweek’s online chats, political reporter Howard Fineman is floored by the hard-left harangues the chatters are offering up. (It’s par for the course for this site, but let’s hope Fineman doesn’t think of this gang as representative of public opinion in general. It might be representative of Newsweek subscribers in general.) The headline: Fineman’s circle thinks the GOP is toast in ‘06, and a little puzzled that Newsweek is being mistaken for a Republican shill sheet :

Remember all those reports filed by the mainstream media predicting doom and gloom right after Katrina devastated New Orleans? Well, the first significant piece of economic data to be released since the hurricanes hit suggests that these media prognostications – as predicted by the Free Market Project on September 6 – had no basis in fact.