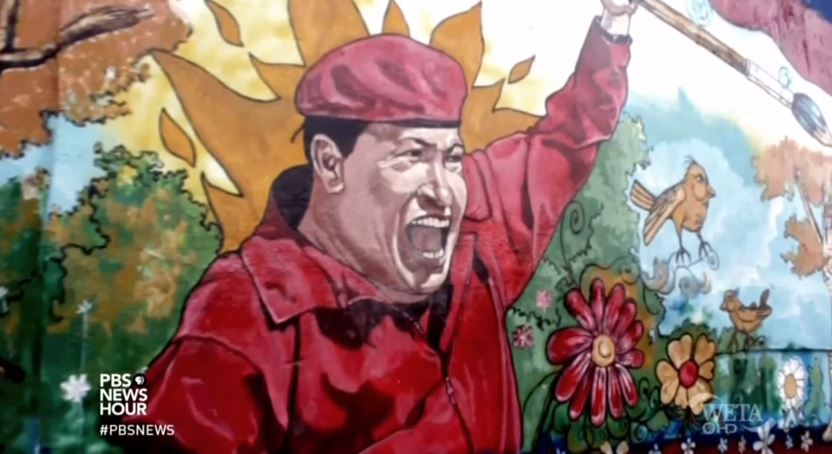 But in typical media fashion, Casey managed to avoid he S-word -- socialism -- for almost all his report, and in a related interview for National Public Radio's Fresh Air actually blamed “consumerism” for the country’s woes, while labeling the late socialist dictator Hugo Chavez as a “very much a democrat in a lot of ways.”

Venezuela is convulsing from hunger.

And they showed that even in a country with the largest oil reserves in the world, it is possible for people to riot because there is not enough food.

In the last two weeks alone, more than 50 food riots, protests and mass looting have erupted around the country. Scores of businesses have been stripped bare or destroyed. At least five people have been killed.

This is precisely the Venezuela its leaders vowed to prevent.

In one of the nation’s worst moments, riots spread from Caracas, the capital, in 1989, leaving hundreds dead at the hands of security forces. Known as the “Caracazo,” or the “Caracas clash,” they were set off by low oil prices, cuts in subsidies and a population that was suddenly impoverished.

The event seared the memory of a future president, Hugo Chávez, who said the country’s inability to provide for its people, and the state’s repression of the uprising, were the reasons Venezuela needed a socialist revolution.

Now his successors find themselves in a similar bind -- or maybe even worse.

The nation is anxiously searching for ways to feed itself.

The economic collapse of recent years has left it unable to produce enough food on its own or import what it needs from abroad. Cities have been militarized under an emergency decree from President Nicolás Maduro, the man Mr. Chávez picked to carry on with his revolution before he died three years ago.

Economists say years of economic mismanagement -- worsened by low prices for oil, the nation’s main source of revenue -- have shattered the food supply.

Sugar fields in the country’s agricultural center lie fallow for lack of fertilizers. Unused machinery rots in shuttered state-owned factories. Staples like corn and rice, once exported, now must be imported and arrive in amounts that do not meet the need.

Another rare mention of ideology:

In response, Mr. Maduro has tightened his grip over the food supply. Using emergency decrees he signed this year, the president put most food distribution in the hands of a group of citizen brigades loyal to leftists, a measure critics say is reminiscent of food rationing in Cuba.

...the government also blames an “economic war” for the shortages. It accuses wealthy business owners of hoarding food and charging exorbitant prices, creating artificial shortages to profit from the country’s misery.

Casey discussed Venezuela on the public radio program Fresh Air, hosted by Terry Gross, on June 8. He cited price controls set by Chavez as a major problem, but when Gross mentioned the S-word, he flinched, blaming Latin American corruption and “consumerism” and even claiming that the socialist strongman Chavez was a democrat in many ways:

Gross: “So Hugo Chavez was the head of the socialist party in Venezuela when he was president. How much do you think he was driven by ideals and how much just by power? Was it a corrupt government?”

Casey made excuses, citing Latin America’s history of corruption and evaded the obvious fact that the late Hugo Chavez was a socialist warrior, saying some guff about “consumerism” instead:

“It's hard to say. I think every government is corrupt to some degree, and corruption in Latin America is almost impossible to escape. Was Hugo Chavez more corrupt than the others? Perhaps. But I think that one of the biggest issues, especially when it came to corruption, was that over the years many people accused Hugo Chavez of being a dictator. And the truth was, was that he was very much a democrat in a lot of ways. A lot of the problems that came from Venezuela came from the fact that he was trying to win elections, and in Latin America, a lot of these elections have come to be -- you're expected to be able to win them by giving things away, especially in Venezuela.

So what happened was huge amounts of the government budget were going to giveaways of homes. They were going to giveaways of televisions, of refrigerators, of other things. Is that corruption? Well, yeah, it feels a lot like you're buying votes from people. Is it democracy? You're trying to win an election. There was this way in which there was a whole unholy alliance between socialism, democracy and consumerism in Venezuela. And I think that was one of the things that drove Venezuela into the ground was the -- you know, unlike somewhere, if you look at the Soviets in the 20th century, you weren't seeing massive amounts of consumerism that was taking place. Like, no one was talking about, at the end of the USSR, trying to keep things up by giving away more television sets.

The Times has done its best to avoid blaming the left or socialism for the convulsions in Venezuela, but has no problem throwing around the phrase “far-right” when talking about opposition to Syrian refugees in Europe.