It must be nice to be a liberal celebrity getting “grilled” by an entertainment journalist.

No hard questions. No probing follow-ups. And, in the case of comic Sarah Silverman, a willingness to peddle spin that’s laughable on the surface.

And, of course, wildly divisive musings on abortion and other hot button issues.

Except that’s not how The Daily Beast spun the special and Sarah Silverman 2.0. Oh, no, the cyber magazine was fed the line, apparently, that Silverman wants to bring red and blue states together. Which leaves us with this Kumbaya headline:

The comic’s own family members couldn’t fawn this hard.

Did Silverman change up her bawdy, R-rated routine? Her entire persona? Perhaps she had a change of heart about her hard-left passions?

Now, in a burst of goodwill, she’s willing to hear the other side and give them a chance. Or, at the very least, not demonize them from her stand-up pulpit. It’s like the Grinch’s heart growing three sizes.

After all, that’s what The Daily Beast’s subhead says:

After nearly dying, filming a Netflix special, and announcing a new talk show, Silverman is on a mission to get un-likeminded people to like each other. And it just might work.

So, to paraphrase a beloved ’80s commercial … “where’s the beef?”

The story doesn’t start in a promising fashion. Silverman, like nearly every other sentient liberal, describes Hulu’s “Handmaid’s Tale” as a quasi-documentary of life under President Donald Trump.

Can you feel the love yet? Let’s give her a chance.

Over the course of our conversation, in a Manhattan hotel room which happens to overlook construction on the Trump Parc building, she refers to Donald Trump and his “cronies” as oligarchs, power addicts, racists, and, with a gesture out the window to the Trump Parc sign, “that a**hole.”

Enter the intrepid journalist. He’s got an angle to pursue, and he won’t let anything she does or says change it.

So she’s angry, sure, but she’s also on a more enlightened mission. Ambitiously, it’s to unite us. More practically, it’s to get us to understand each other.

Her idea of outreach to the Red States? Refer to the president with an expletive and call his inner circle every awful name in the book. Got it. 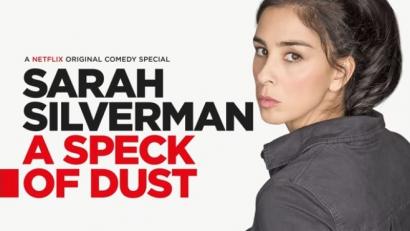 Later in the Q&A, the comic confesses even she doesn’t buy this kinder, gentler pose.

She’s the first to admit that she’s guilty of being the person boasting about how she’s right and you’re wrong and probably also an a**hole. But remembering that issues aren’t always black and white, that people are often a byproduct of how they are raised, and, most importantly, that your opinions are not necessarily facts goes a long way.

That won’t deter The Daily Beast, though. It’s got a progressive comic to prop up as a thought leader for our troubled times.

There’s a line in Speck of Dust, I tell her after this, that I take issue with: “People put more depth on me than I have.”

The writer is flailing here, trying to make this far-left comic into a modern soothsayer.

Silverman couldn’t even cut a trailer for her Netflix special without mocking Christians and conservatives.

It’s enough to make you think The Daily Beast made the whole healing angle up.

Then again, maybe she’s softened her stance on social media. Let’s check in with her Twitter feed.

Maybe that’s not such a good idea…

At the very least Silverman must be aghast at how her fellow comic, Kathy Griffin, posed with the severed head of President Trump.

Even Keith Olbermann threw a flag on that stunt, and he’s the most aggressively partisan commentator around.

Silverman took the subject head on, no pun intended, during an event to promote her new comedy special.

“Kathy is a singular voice,” Silverman declared to a packed crowd of fans and Emmy voters. “She’s really funny, and it won’t be news tomorrow. Kathy is a prolific storyteller. That’s part of who she is.”