The Business of Rebuilding

By Herman Cain | August 24, 2005 2:00 PM EDT
Network news gives little time to Americans generosity, as businesses use their profits to help the needy.

The Media Spin: Bring Out the Tea Leaves

By David Goodnow | August 24, 2005 2:00 PM EDT
Global warming is in fashion today, but veteran journalist David Goodnow remembers when we once feared another little ice age.

Econ 101: Are Housing Prices Too High?

Media Take a Bite Out of CAFE Guidelines

Reporter Laurie Goodstein opens with a loaded rundown of Robertson's greatest hits before getting to the newest controversy: "Pat Robertson, the conservative Christian broadcaster, has attracted attention over the ears for lambasting feminists, 'activist' judges, the United Nations and Disneyland."

New York Times reporter Anthony DePalma today perfectly demonstrates the mantra of much of the modern press: Never pass up an opportunity to bash Bush.

In his front-page story entitled “9 States in Plan to Cut Emissions by Power Plants,” Mr. DePalma adroitly accomplishes this credo in paragraph two:

The cooperative action, the first of its kind in the nation, came after the Bush administration decided not to regulate the greenhouse gases that contribute to global warming.

The beauty of this sentence is its derision without specificity. For instance, Mr. DePalma doesn’t elaborate on how Bush blocked such environmental regulations until the second page of the story buried inside the main section in paragraph 23:

The Bush administration's rejection of the Kyoto Protocols has caused deep divisions nationwide, with many local governments attempting to force the administration to taking action by passing their own carbon dioxide rules.

OF COURSE! This is about KYOTO!

By Mike Bates | August 24, 2005 11:55 AM EDT
On Tuesday evening's Hardball, Chris Matthews joined the pack in identifying Pat Robertson as a Republican leader: "Otherwise, it will look like a major leader in the Republican Party on the conservative side of things...who won the Iowa caucuses back in ‘88, by the way...for president, is out to get this guy (Hugo Chavez)."

In an utterly disgraceful (even for them) grab for another anti-war family dustup, the Associated Press today unleashed a story called, “Troops' Gravestones Have Pentagon Slogans.”

By Brent Baker | August 24, 2005 11:18 AM EDT
NBC on Tuesday night devoted a story to comparing Iraq to Vietnam. Reporter Jim Miklaszewski concluded that “while there are marked differences between the wars in Iraq and Vietnam, the rhetoric, at least, is beginning to sound much the same.” Miklaszewski used as an excuse for raising the subject how "Defense Secretary Donald Rumsfeld himself bringing up the Vietnam issue at his Pentagon briefing today” and rejected the equivalence. Miklaszewski went on to highlight how Senator Chuck Hagel, “the prominent Republican and decorated Vietnam veteran, said this week the U.S. is now bogged down in Iraq, similar to Vietnam.” Miklaszewski reported that “there's increasing concern in the Pentagon that a growing anti-war drumbeat here at home” -- a drumbeat being pounded by NBC -- “could eventually take a toll on troop morale in Iraq, not at all unlike Vietnam.” He also chided Rumsfeld for how he “ignored the latest polls which indicate a majority of Americans now think it was a mistake to go to war in Iraq."

CyberAlert item follows. For all of the articles in today's MRC CyberAlert.

Sheehanigans at the LA Times

By Mithridate Ombud | August 24, 2005 10:52 AM EDT
Pat Morrison editorializes for the LA Times, I'm going to have to break this one down one stream-of-consciousness at a time:

WHO DIED AND left Cindy Sheehan in charge? We put her in charge the press, the politicians, the people. We put her in charge not just of her own message and her mission, which is all she had asked for, but we cranked up her voice to equal volume with the man she's calling out: POTUS himself, George W.

Why Does Our Media Support Our Enemies?

A front-page story concerning Iran in Tuesday’s Washington Post was clearly intended to thwart American efforts preventing that country from obtaining nuclear weapons, as well as to embarrass the Bush administration with more implications of faulty intelligence.

Traces of bomb-grade uranium found two years ago in Iran came from contaminated Pakistani equipment and are not evidence of a clandestine nuclear weapons program, a group of U.S. government experts and other international scientists has determined.

"The biggest smoking gun that everyone was waving is now eliminated with these conclusions," said a senior official who discussed the still-confidential findings on the condition of anonymity.

Dontcha just love it when media outlets quote unnamed sources in stories with such vast global implications?  Oftentimes, as in this instance, such vague references result in the article being so loosely based in verifiable facts that it is tough to take it seriously.

The agony of defeat

"It's easy and it's brainless," Mr. Klein said in a telephone interview, explaining why cable news outlets have gravitated to [Natalee Holloway].

Matthews on Today show: "fair comparisons" of Iraq to Vietnam 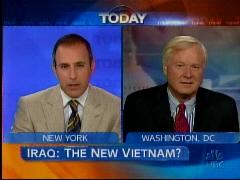 You know the MSM figure a story has legs when they create a logo for it, and sure enough Today opened its segment with a natty little logo of an American solider, an Iraqi flag, and the emblazoned question: "Iraq – the new Vietnam?”

In to answer the question was that paragon of objectivity Chris Matthews – former aide to Dem House Speaker Tip O’Neill.