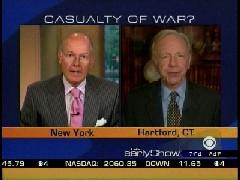 On Wednesday's edition of CBS' The Early Show, anchor Harry Smith discussed the primary election results from the state of Connecticut with Senator Joe Lieberman and political analyst Amy Walter. Harry took his standard, normal position - the left side. 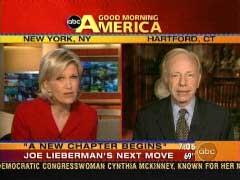 Matt Lauer, Diane Sawyer and Harry Smith aren't dumb, they know a potential roadblock to Democratic success when they see one, and that's why all three of them collectively told Sen. Joseph Lieberman to drop out. Lieberman appeared on all three network morning shows and received identical reactions from all three hosts.

If a Senate study concluded that legislation signed by President George W. Bush and supported by Halliburton was partially responsible for today’s high oil and gas prices, do you think you would have heard about it?

Q. How can you tell when the MSM's liberal slip is showing?

A. When a host argues from the left with his own non-partisan expert!

That's just what happened on this morning's Early Show. Amy Walter of the Cook Political Report was brought on to analyze yesterday's CT senate primary results. Cook presents itself as non-partisan, and certainly no one can accuse Walter of being a closet conservative. As per her bio, "prior to joining The Cook Political Report, she served as Political Director of the Women's Campaign Fund and worked for Congresswoman Marjorie Margolies-Mezvinsky (D-PA-13)."

From the get-go, host Harry Smith tried to depict Lamont's victory as having far-ranging anti-war implications: "The blogosphere was on fire. Does this send a message to Democrats to say, if you want our support, you better get out there and be against the war and against the president?"

Let's not let Reuters steal all the headlines. From an AP dispatch on tonight's Connecticut primary:

Lieberman: Some Bloggers Bigoted, No Dem Can Dissuade Him From Indie Run 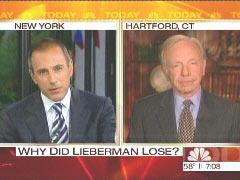 Howard Dean's 2004 presidential primary run was largely fueled by internet-driven support orchestrated by campaign manager Joe Trippi. That campaign fell famously short in the echoes of Dean's Iowa caucus-night scream. But with Ned Lamont's win, the left wing blogosphere can this morning claim perhaps its first major victory . . . at least in a Democratic primary if not in a general election.

For the last decade or two, the Big Three network news ratings have declined and their once-iron grip on public opinion has loosened, prompting this debate: is this decline merely a sign of increasing 24-7 media availability (cable news, Internet sites) or is the liberal tilt of the networks driving conservative viewers away from these networks in favor of alternative outlets?

The Anti-Defamation League (ADL), a prominent organization that has been combatting anti-Semitism and bigotry for 90 years, has issued a letter to MSNBC Countdown host Keith Olbermann. The letter, dated July 28, 2006, takes serious issue with Olbermann's repeated use of the Nazi salute while badgering Bill O'Reilly. The body of ADL's letter begins as follows: 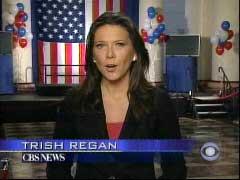 Twice on Tuesday, CBS News correspondent Trish Regan labeled as “infamous” the embrace, derided as “The Kiss” by supporters of Connecticut Senate hopeful Ned Lamont, between President George W. Bush and incumbent Democratic Senator Joe Lieberman in the well of the House after Bush's 2005 State of the Union address. Regan didn't attribute the characterization to Lieberman's opponents. She stated it as fact.

By Mike Bates | August 8, 2006 8:30 PM EDT
Today's Los Angeles Times includes an extended obituary on Dorothy Healey, described as "a onetime labor organizer, civil rights activist and Marxist radio commentator." The newspaper found nothing but praise for the old comrade. According to an acquaintance: "She was always so fiercely partisan for working people.

Imagine if Rush Limbaugh had said it . . .

'Rome is Burning' is ESPN's edgy sports-commentary show starring the eponymous Jim Rome. Jason Whitlock is standing in for Rome this week, and while I don't know much about him, from what I've seen I enjoy his shtick. He's smart, funny and seems to successfully walk the fine line of expressing strong views without being malicious.

In any case, in the show's opening monologue, the host riffs on what 'he's burning about.' Among Whitlock's topics today was what he suggests be the top priority for about-to-be-announced new NFL Commisioner. For Whitlock, job #1 is

"Fixing the league's officiating crisis. The new commissioner shouldn't bury his head in the sand and pretend everything is OK with the zebras. It's not. The new millenium NFL player is souped up on supplements and moves at the speed of sound. It's ridiculous to have 50 year-old white guys chasing after 25-yr old black guys."

ABC: Gas Prices Too High? Don't Just Drive On By