At National Review Online today, Stephen Spruiell of NRO's Media Blog reviews a new book charging the liberal media are a pound full of poodles for the White House. It's like a modern-day reworking of Mark Hertsgaard's Reagan-era tract On Bended Knee -- the last time an author wrote a laugh-out-loud expose of the supposedly wimpy/conservative national media sucking up to a president:

As his environmental apocalypse "documentary" makes its debut in New York and Los Angeles today, there's nothing "inconvenient" standing in the way of Al Gore's crusade in the New York Times.

After successfully putting the kibosh on a "South Park" episode that made fun of scientology and himself, actor Tom Cruise has expanded his censorship efforts overseas where he's succeeded in getting the same episode pulled in the U.K.:

The South Park episode "Trapped In the Closet," which mocks actor Tom Cruise's rumored homosexuality as well as his belief in the controversial religion Scientology, has finally been seen by the English. The episode had been banned from UK broadcaster Channel 4 after Cruise had complained.

According to the World Entertainment News Network, London's National Film Theater screened the episode on Monday, May 15. After the showing, South Park creators Matt Stone and Trey Parker spoke about the necessity of free speech. The event concluded with free copies of the episode being handed out to attendees.

In regards to possible action by the litigious Cruise, a spokesman for the Theater said, "If we were charging [for tickets] there may have been legal problems, but it was a free event, so it should be fine."

By | May 24, 2006 10:08 AM EDT
Patriotic American users of Microsoft's Hotmail service may be surprised when trying to obtain an email address. The company does not allow new users to sign up for a user name containing the word "american."

At first glance, it seemed that Hotmail is taking precaution to limit phishing attempts which often rely on official-sounding addresses to trick recipients into paying money to people posing as governmental entities. However, my quick check showed that names with "canadian," "francais," "german," "australian," "english," and "deutsch," are all allowed.

With Gore as Guest, Katie's Smile Says It All 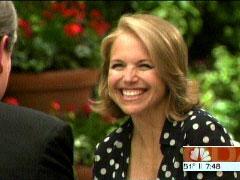 Let's imagine that instead of Al Gore, Katie Couric's guest this morning was a Republican presidential hopeful whose message on the environment was that we should not let alarmism push us into measures that would undermine our economy and way of life. Could you ever - ever! - imagine Katie flashing at him the 10,000 megawatt smile she has on display here for Al?

The Trashing of the Christ: Hopelessly Devoted To The DaVinci Code

On Tuesday afternoon, we posted our latest Special Report on religion and the news media, titled The Trashing of the Christ: Contrasts In Media Treatment of The DaVinci Code and The Passion. Both films received an extraordinary amount of network TV news attention before they were released, but we found that much of the Code coverage was gooey and giddy, with lots of talk from network stars about how they "couldn't wait" to see it.

The Dixie Chicks and their marketing gurus clearly know publicity. They asked themselves: How can we get ourselves featured on the cover of Time and hailed on CBS’s “60 Minutes” just before the new CD comes out? Easy. Trash George W. Bush again. 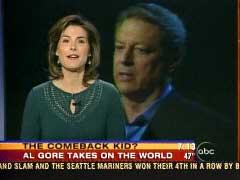 Harry Smith, co-host of CBS’s "The Early Show," has spent the last few days reporting from Baghdad. On Friday, he reported the security situation was such that he couldn’t go out and get ice cream. But today, he decided to look for a success story. He found one, but he proved that while he can report a bad news story without mentioning any good news, he can’t report a success story without finding negative items to talk about. Reporting from Baghdad, Harry Smith began his piece, which profiled the work of the U.S. Army 4th Infantry Division’s work in the town of Sababor, talking about the violence in Iraq: "Yeah, good morning. I'll tell you what, just an illustration of how much bad news there is here. A friend of mine here in Iraq told me the other day 'the busiest people in this town are the terrorists.'" Later, he talked of a bombing in Sababor which occurred a month ago: "It hasn't been easy. Just a month ago, a bomb here killed 15 people."

And at one point, "The Early Show" co-host appeared surprised to learn that people in Sababor view Americans positively. And Smith seemed even more shocked when one of the boys told him his name was "Bush" after Smith had an apparent James Bond like moment in introducing himself to the boy.

What is he afraid of? Vicente Fox, the president of Mexico, announced that he would be taking "no questions" during his trip to the U.S. Is he afraid the media will ask him why Bush is being so cruel to illegals?

On May 22, the Federal Trade Commission released a report finding no systemic price gouging resulting from the aftermath of Hurricane Katrina. The following day, USA Today -- which has carried a "nation's gas gauge" item in its front page sidebar for a few weeks now -- assigned the story below-the-fold treatment in the Money section.

Another story, on how average gas prices have dropped 6.4 cents in the past week, was relegated to the sidebar of the Money section page as well.

In 2003, country music stations around the country boycotted the music of the Dixie Chicks, a group of three women that originated as a country ensemble. One of the members, Natalie Maines, told a London group in 2003 that she was ashamed to be from the same state as President Bush because of his starting of the Iraq war.

Since NewsBusters first broke the story about Google News capriciously terminating its relationship with conservative e-zines and web journals, and followed (with the help of writer and software developer Marc Sheppard) with a detailed analysis