As Brent Baker noted on NewsBusters, last night on Larry King Live Bob Woodward made what amounted to a pro-Bush point regarding an Iraq-Niger uranium deal. In a Thursday piece on the Editor & Publisher web site, however, Woodward's ex-Washington Post colleague Carl Bernstein, discussing the Iraq war and Plamegate, sounded anything but pro-Bush. (Hat tip: Romenesko.)

Miers Problems Due to Qualifications? Cokie Roberts Says It's A Lot of "Sexism"

By Lyford Beverage | October 28, 2005 8:13 AM EDT
Cokie Roberts, on ABC's Good Morning America this morning, is accusing the conservative opposition to Harriet Miers of sexism. When asked whether the standards were higher for Miers than they would have been for a man, Roberts replied: 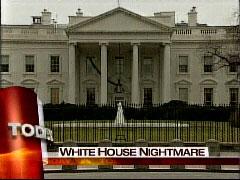 Let's look at the facts:

So if you were writing the opening graphic for this morning's Today show,

As we prepare for any Patrick Fitzgerald moves today on Plamegate, and the press gets out its bottle of Clinton's Milk of Amnesia, don't just remember, as Rich Noyes did, that the media yawned when it came out that Robert Ray could have indicted Hillary. From the cobwebs of the April 1999 edition of our old paper newsletter MediaWatch, a reminder that the media also yawned when the grand jury forewoman felt she would have supported indicting President Clinton: Unlike ABC and CBS, on Thursday night, NBC informed viewers of a report on the United Nations Oil-for-Food scandal, as NBC Nightly News anchor Brian Williams stated that "2,000 companies paid nearly $2 billion in kickbacks directly to Saddam Hussein" and that "the country with the most companies involved in this was Russia, followed by France." A complete transcript of the story from the October 27 NBC Nightly News follows:

Woodward Points Out Wilson Found Evidence of Iraq-Niger Deal, Tosses It to Dodd

Much to Senator Chris Dodd's consternation on Thursday's Larry King Live on CNN, Washington Post Assistant Managing Editor Bob Woodward, of Watergate fame, pointed out a fact rarely mentioned by the mainstream media -- that “most of the analysts at the CIA said that [Joseph] Wilson's findings, when he went to Niger, supported the conclusion that there was some deal with Iraq” for uranium. When Dodd started to counter Woodward, Woodward asserted that “Democrats and the Republicans all signed that report. That is a fact.” Woodward revealed that he had the report “in his pocket”and when King asked why, Woodward answered: "Yes I do because I knew I might be challenged." When King went to an ad break two minutes later, the camera pulled back to show everyone at the table. Woodward then slid forward across the table to Dodd what looked like a few 8-and-half-by-11 sheets of paper with a post-it on top. Dodd ignored it, but in the second before CNN went to black, Senator Lindsey Graham, sitting beside Dodd, picked them up.

The still shot is from a fraction of a second after the papers are released from Woodward's hand. Video excerpt of this event: Real or Windows Media. Dodd says something as he looks toward Woodward. If you can read lips... (Transcript of the earlier exchange follows.)

Russert: Republicans Are Calling This “The Week From Hell”

Tim Russert of “Meet the Press” was on the "NBC Nightly News” this evening talking about Harriet Miers. He stated that the announcement of her resignation this morning is part of a new strategy by President Bush to “get control of his second term that is spiraling out of control.” In addition, according to Russert, Republicans are calling this "The week from hell.”

In Russert’s view, Republicans weren’t interested in seeing what would happen on November 7 when the confirmation hearings were scheduled to begin, and instead advised the president to “lance it now.”

Finally, Russert said that if indictments do indeed come tomorrow from Patrick Fitzgerald, "[Republicans] hope there are plea bargains and this issue is quickly resolved and settled to spare the president’s second term."

People who know Harriet Miers in Dallas, Lee Cowan reported on Thursday's CBS Evening News, think she “deserved better than this" and he quickly moved to highlight those mad at conservatives, or as one cab driver charged, the “far right.” Cowan relayed that “at a Dallas diner this morning, her withdrawal served up a lot of disappointment” where patrons were upset “that conservatives, even here in her home state, weren't willing to give her a chance." Cowan went outside and leaned into a taxi to ask the driver: "What happened?” The cabbie replied: "I think the far right, they had been itching for a big battle for years." Cowan did pass along a defense of conservatives: "Dallas talk show host Mark Davis though says local conservatives are actually just trying to watch out for the President's legacy."

Over on ABC's World News Tonight, following a lead story from Terry Moran, Linda Douglass opened a piece: "Democrats were quick to blame Miers' collapse on conservative activists, who demanded loudly that the President dump her." After a clip of Senator Harry Reid scolding the “the radical right wing of the Republican Party,” Douglass picked up on how Senator Arlen Specter "said the groups drowned her and the President out." Following bites from Senator Sam Brownback and Rush Limbaugh, she returned to the anti-conservative prism from which she began, setting up a slam from Senator Ted Kennedy by relating how Democrats say "if he chooses an ideological conservative, he will appear to be the tool of outside groups," and she concluded with how “Senator [Lindsey] Graham is urging the President to appoint someone who, in his words, 'won't blow this place up'” -- meaning a non-conservative. Pivoting from Douglass, anchor Bob Woodruff turned to George Stephanopoulos and inquired: “Does he [Bush] have to nominate a conservative to satisfy the base of his party or a moderate who would be acceptable enough to Democrats to avoid a long and prolonged fight?” Stephanopoulos listed some potential nominees before warning: “Both Priscilla Owen and Michael Luttig fall into that category that Lindsey Graham talked about. They would blow the place up." (Transcripts follow.)

By Edward L. Daley | October 27, 2005 7:37 PM EDT
I have several requirements for supporting Supreme Court nominees, among them being that Chucky Schumer and Harry Reid must hate them. Let's face it, if these two clowns support you, you have about as good a chance of being a rational human being as Al Gore has of developing a personality. With that in mind, it should not be hard to understand why I practically jumped for joy when I heard that Harriet Miers was withdrawing her nomination to the high court. Even though most of my Republican friends kept telling

In his blog post today, MSNBC host Keith Olbermann not only takes credit for a World Series prediction he didn't make, but also links the Chicago White Sox' championship to...Plamegate.

(At this writing, the post in question is misdated October 24, but it's at the top of the page nonetheless.)

On to promote an annual conference on women's issues in California former NBC reporter and the current First Lady of California, Maria Shriver, stressed her desire to make sure it wasn't partisan because "that's not what I'm about." Anyone who's followed Shriver's career at NBC can't help but guffaw at that one. The following is an exchange between Matt Lauer and Maria Shriver that took place at 8:39am on this morning's Today show:

CBS News legal analyst, Andrew Cohen, today relays a conspiracy theory some have cooked up regarding the Miers nomination: Miers was never intended to sit on the Court, but rather to be a "sacrificial lamb" whose botched nomination would make it harder for liberals to sink her more conservative replacement.

Cohen himself finds the notion "only mildly paranoid when you think about it," adding:

By R. Warren Anderson | October 27, 2005 2:00 PM EDT
NBC criticizes oil company profits, wondering how much is too much?