The Wikipedia entry for Fox News Watch commentator Jane Hall notes that she has "has worn a skirt and pantyhose in every edition of the show thus far."

Jane Hall is one of four pundits on the Fox News Channel program Fox News Watch. She has become the most popular member of the show, gaining legions of male admirers who write in to the show expressing their appreciation of her beauty and great legs. Hall has worn a skirt and pantyhose in every edition of the show thus far.

"The writer of this entry hopes Professor Hall will give him a good grade on his midterm."

That last part is implied.

ABC Reporter: Ah, the "Relief" of Being Right When Global Warming Scorches Earth 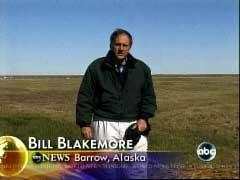 On their blog The World Newser, ABC reporter Bill Blakemore writes about the loneliness of the global-warming (panic) beat, where resistance is futile to the certitude of man's fossil-fuel addiction frying the planet like a fish stick.

When Did Working in Public Broadcasting Get So Lucrative?

The New Road to Riches: Public radio! ...Minnesota Public Radio is resisting a state law requiring that it disclose salaries over $100,000 if it wants to keep getting state subsidies:

Newsweek Senior Editor and columnist Jonathan Alter has been inflating the Bush-Cheney duo into an Evil Empire of sorts, utterly undeserving of office (and acting "like a dictator." ) His column this week was titled "The Imperial Vice Presidency," which would have been a laughable headline in the pre-Cheney days. Alter began by endorsing the wild rhetoric of CNN's biggest hothead:

By Tim Graham | February 25, 2006 10:35 AM EST
In Friday's daily Washington Post online chat on politics, Dana Milbank cracks wise about his trip to the woodshed over wearing a hunter-orange getup to mock Dick Cheney on MSNBC, but won't answer the simple question debated in the Sunday column of ombud Deborah Howell, whether he's an opinion columnist or some other kind of columnist, as this questioner discovers:

Ellen Ratner has nailed a 'No Foreigners Need Apply' sign to the Statue of Liberty. On this morning's Fox & Friends Weekend, Ratner opined that no foreign company, regardless of nationality, should operate our ports, or for that matter other significant chunks of our economy.

Claimed Ratner, the real issue is "what kind of jobs, what kind of outsourcing are we going to do in this country?"

Reporting on a fresh development in the Fannie Mae accounting scandals, the media again dropped another opportunity to raise the Clinton administration connections. But when it was Enron which defrauded investors, the media wouldn't let the public forget the connections Enron executives had to President Bush.

You can find my article on this at FreeMarketProject.org. Here's an excerpt:

During this afternoon’s Situation Room, CNN’s Jack Cafferty mocked the President for referring to the Bush administration as "my government." Yesterday morning, President Bush, while responding to a reporter’s question on the controversy surrounding the management of six U.S. ports being turned over to a United Arab Emirates-owned company, remarked that the transaction had been vetted by "my government" and that the ports would remain secure.

This innocuous phrase seemed to tick Cafferty off during his daily Cafferty File segment shortly before 4:15pm.

Jack Cafferty: "Is it still Bush’s government? Remember in the cabinet meeting he said, don’t worry about security, my government has taken a look at this and everything’s alright?..That’s unbelievable."

Silly as this may sound, Cafferty took great offense that the President of the United States had referred to his administration as, well, his. Cafferty, bafflingly, interpreted "my government" to mean that President Bush had decided to take sole ownership of the U.S. government. When anchor Wolf Blitzer reassured Cafferty that it is indeed "our government," Cafferty fired back angrily:

Cafferty: "Well, not, not according to President Bush it isn’t. It’s my government, he said."

The full transcript is behind the cut.

By Mike Bates | February 24, 2006 2:55 PM EST
Today's CNN.com carries the AP story "'Daily Show' humor befuddles governor." The article centers on Illinois Gov. Rod Blagojevich, who made a recent appearance on the program and now claims he didn't realize it is a spoof. "'It was going to be an interview on contraceptives ... that's all I knew about it,' Blagojevich laughingly told the St. Louis Post-Dispatch in a story for Thursday's editions.

Time: Hollywood Might Be "Somewhat Conservative" At Oscar Time

You never know what wacky line you're going to find leafing through the back pages of Time magazine, and in placing their bets in this week's elapsing issue, Time film critics Richard Corliss and Richard Schickel predict "Brokeback Mountain" will win the Best Picture Oscar.

Oops! They Did It Again

By Amy Menefee | February 24, 2006 2:00 PM EST
NY Times, CNN sling mud at businessman Pickens charitable gift, calling it a controversy even though actions were legal and school benefits from the gift.

Via Fishbowl DC, we learn that Howard Mortman's created a new feature on his blog asking famous media types what they read on the Internet. In the early going, both Newsweek top political reporter Howard Fineman and ABC correspondent Jake Tapper list some typical major-media sites, but more interesting to the reader is their claims to digest a balanced diet of blog intake on a daily basis.