The Contingency of 'Truth,' Redux

By Jeff Goldstein | August 10, 2006 8:40 AM EDT
It seems some in the legacy media are entering into that next phase of narrative manipulation—a redefining of terms in order to 1) provide revisionary cover for its ideological fellow travelers, and 2) to fabricate and then facilitate a bandwagon effect. For instance, The New York Times this morning editorializes on the Lamont victory this way:

The rebellion against Mr. Lieberman was actually an uprising by that rare phenomenon, irate moderates. They are the voters who have been unnerved

If a long-time member of Congress lost a primary battle for re-election, and his/her campaign entourage shouted racial epithets at reporters and about her opponent after defeat, do you think this would have been on the evening news? Well, if said member of Congress was a Democrat, the answer apparently is “no,” for not one of the broadcast networks felt it was newsworthy to report Tuesday evening's events involving Rep.

By | August 10, 2006 8:02 AM EDT
The foiling of a terrorist plot to blow up American airplanes coming from the UK will be today's top story. Post here on it and anything else. 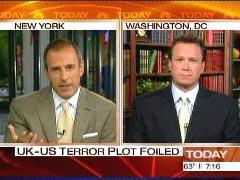 There is a noteworthy MSM tendency to downplay the gravity of terrorist acts by suggesting that they are local, home-grown incidents rather than forming part of international conspiracies. A recent example was the MSM's treatment of the Seattle Jewish center shootings in which a Muslim-American killed one woman and injured several others.

Bill Maher on Leno: 'Ethnic Cleansing' at the Border, Bush the 'Idiot' 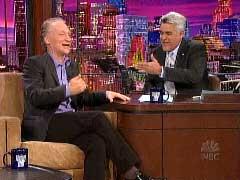 Also from Michelle Humphrey's bag of Tuesday night TV was HBO talk show host Bill Maher making his usual cracks about conservative haters and how the world is ruined by religion. MRC intern Chadd Clark did the transcribing, and took special notice to this crack on immigration: 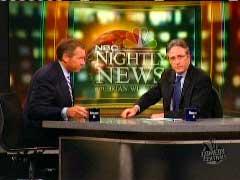 Our own Michelle Humphrey noticed that NBC anchor Brian Williams appeared Tuesday on "The Daily Show," and in the midst of all the chummy banter, Jon Stewart was still cracking wise, in the face of the evidence, that the federal government has/had no presence in New Orleans after Hurricane Katrina. MRC intern Eugene Gibilaro transcribed it: 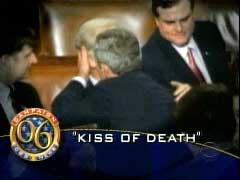 Ghosts in the Media Machine

Bloggers—and to a much lesser extent some media outlets—have paid considerable attention to specific examples of media manipulation in the war being fought between Hezbollah and the IDF in Lebanon and Israel, but we seem be under-covering the overall framing of the media's coverage, particularly when it comes to the subject matter chosen for coverage.

This comes into sharp relief when contrasted against the coverage we've become used to from the war in Iraq, particularly as it relates to the media coverage allowed and provided by two different insurgencies in Lebanon's Hezbollah and Iraq's predominately Sunni insurgency.

In Iraq, we’ve become somewhat used to embedded reporters reporting from both sides of the conflict with a fairly wide latitude to operate. Stringers, both print media and photographers, have occasionally embedded within the insurgency, providing coverage from ambushes and sniper's nests alike. The insurgents themselves often seem to be media hungry, filming operations themselves and often releasing the tapes to the media or producing them on DVDs for public consumption in Iraq and throughout the Middle East.

By and large, the vast majority of video reporting allowed and encouraged by the Iraqi insurgency is combat-related. IED ambushes are particularly popular, often released as montages set to Islamist music as propaganda videos. The Iraqi insurgents have often seemed intent on portraying themselves as rebel forces actively waging a war for the people, whether or not the people would always agree.

Hezbollah, however, seems to be fighting a different kind of media war.

That didn't take long. Just yesterday, Ned Lamont was the netroot hero, the pride of MoveOn.org, the scourge of the GOP. Today, Dem nomination in hand, he began his run toward the center - with a little help from his MSM friends.

On this evening's Hardball, Chris Matthews scoffed at the fact that the RNC put Lamont's picture up on its website alongside Michael Moore, Markos Moulitsas of the Daily Kos, Howard Dean, and John Murtha. Well, let's see: Dean via his DFA organization openly campaigned for Lamont over Lieberman. Daily Kos

put itself totally in the service of Lamont. As for Moore and Murtha, can anyone point to an iota of difference between their views on Iraq and those of Lamont?

Would Matthews have scoffed had the RNC put up this actual photo showing Lamont on his victory platform surrounded by Jesse Jackson, Al Sharpton and NOW's Kim Gandy?

Interviewing Lamont, Matthews offered him the chance to show what a non-partisan guy he is, inviting him to name his Republican 'heroes.' Lamont mentioned Teddy Roosevelt - for busting trusts, Colin Powell, and John McCain - for being willing to buck the status quo.

An aside - Lamont noted that he disagreed with McCain on 'choice.' I don't know about you, but of all the political sleight of tongue, using 'choice' as a euphemism for abortion is one that particularly grates on me.

In the wake of anti-war candidate Ned Lamont's win over Sen. Joe Lieberman in the Democratic Senate primary in Connecticut, the paper's lead editorial on Wednesday, "Revenge of the Irate Moderates," ludicrously tries to portray vengeful anti-Lieberman bloggers and anti-war activists as moderates.

Tucker Carlson stopped short of saying that some of his best friends are Jewish. But he did let us know that "I love Israel, I think it's a wonderful place, I support it completely, I support it instinctively."

That was just before he declared that "I think this war helps Hezbollah. I think it's bad for Israel, bad for the United States. I think you can love Israel and believe this war is a disaster."

And it was just after he criticized President Bush for being too pro-Israel.

Carlson turned to Bill Press, his guest on this afternoon's Tucker show on MSNBC, observing:

"You never hear Democrats point out that Bush is not even-handed in the Middle East. You almost never hear anybody criticize the President for taking the side of Israel to the extent that he alienates the Arab world completely. Why doesn't anybody ever mention that?"

The former chairman of the California Dem party gave a response suggesting he might be a proud graduate of the Pat Buchanan 'Amen Corner' School of Foreign Policy:

CBS Warns That 'Even One Bad Meal Can Hurt Your Body'

Network story on saturated fat is the media's latest entree in a menu of anti-fast food stories.

The National Enquirer reported Wednesday (hat tip to Drudge) that comedian Robin Williams has entered an alcohol rehab on July 11 to try and conquer “a three-year battle with booze that's threatening to destroy his marriage.” Though we certainly wish Williams well, it does seem rather odd that twelve days before he checked into the Hazelden Springbrook rehab facility in Newberg, Oregon, he was on the “Tonight Show” making disparaging remarks about radio host Rush Limbaugh’s problems with painkillers (video to follow).

He and host Jay Leno were discussing Limbaugh's recent run-in with customs agents over Viagra, and Williams quipped:

But he's got kind of a a tradition of doing that, when he used to have his maid be the mule. [ With a Hispanic accent ] "Mr. Limbaugh, I come back with your medication." Where was he staying in the Caribbean, Club Medicated?

For those that are interested, NewsBusters reported this on July 1. Here is the link to that report, which contains a video of the “Tonight Show” segment in question. However, the reader is cautioned that some of Williams’ comments about Limbaugh were rather vulgar.

As many anticipated, Senator Joe Lieberman lost his bid for renomination to the U.S. Senate in Connecticut yesterday. This morning, as reported here by MRC analyst Geoff Dickens, all three network morning shows interviewed Mr. Lieberman and in essence told him to quit the race. And as reported here by Lyford Beverage, Harry Smith, co-host of the "Early Show" questioned the Senator from the left.

However, some important points have been neglected regarding Mr. Smith’s questions. As to Smith’s point: