Gore: 'Democracy is Under Attack'

Former veep Al Gore continues to get slavishly great press (the kind a Republican could only get by switching parties à la Jim Jeffords), this time for a speech he gave in Scotland claiming that "democracy is under attack" from media consolidation. I'm doubtful that he mentioned similar dangers from ultrarich leftists like George Soros trying to buy their own governments in various countries.

The first few grafs from AP reporter Jill Lawless are relatively straightforward (minus the fact that she did not ask other media thinkers to counter Gore):

"Democracy is under attack," Gore told an audience at the Edinburgh International Television Festival. "Democracy as a system for self-governance is facing more serious challenges now than it has faced for a long time.

"Democracy is a conversation, and the most important role of the media is to facilitate that conversation of democracy. Now the conversation is more controlled, it is more centralized."

Hurricane Katrina: An Anniversary Made for Bush-Bashing, in the NY Times

Here they come: The anniversary stories of Hurricane Katrina, giving the New York Times and other media outlets a precious opportunity for extraneous Bush-bashing. 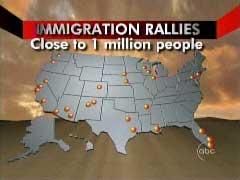 Read all about it: a new MRC special report called “Election in the Streets,” that demonstrates that ABC, CBS, and NBC behaved like protester publicists in late March, April, and May, in complete contradiction to public opinion polls sh

More Protesters of No Identifiable Ideology in Washington Post

The contrasting screen captures say it all.

We all knew that the one-year Katrina anniversary was going to be a festival of MSM Bush-bashing. And while Good Morning America certainly fulfilled that expectation this morning, who could have guessed that they would have thrown in a two-fer - the beginnings of the beatification of Bill Clinton?

Check out the graphic. Move over, Jimmy Carter: ABC has proclaimed Bill Clinton the new Philanthropist-in-Chief! Interviewed by Robin Roberts, Clinton allowed as to how if he had been in charge during Katrina "I might have done something more just because I feel so close to the area." Darn that 22nd Amendment!

Earlier on, Charlie Gibson ensured that America wouldn't forget what was portrayed as a low point for Pres. Bush during Katrina. As the screen showed W peering down at the devastation from a plane window, Gibson told us that with regard to government plans to deal with future hurricanes:

"There's a certain doubt, even though it's all on paper, whether it would actually work. Because one of the sad parts of this is that there's been an erosion in confidence in government . . . I think everybody 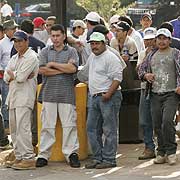 To reduce the number of people trying to enter the US illegally . . . pay them more once they get here. Sound illogical? Not if you're a Boston Globe editorialist.

You would think that Reuters learned its lesson about publishing to the world photos doctored to create a false image. After all, they were caught with multiple false photos from Lebanon, and had to take down more than 900 images from one stringer. Reuters promised it would have "experienced editors" look at all such photos in the future.

The New York Times continues its coverage of the world the way they think it ought to be, with the Democratic party in control of the United States Congress. This morning's piece - Issues Await if Democrats Retake House - goes through the issues facing our gallant Dems as they prepare to take back the various House chairmanships that were usurped by Speaker Newt lo these many years ago. The New York Times, of course, is in favor of that happening.

What Did Fitzgerald Know and When Did He Know It?

By Jason Smith | August 27, 2006 10:59 PM EDT
Now we know where Robert Novak learned about Valerie Plame. To the Left's dismay, it wasn't some mega-whopper conspiracy of historical proportions aimed at paying back a critic of the administration... instead, it was just a guy who liked Washington gossip, and actually once called Bush, Cheney, et al. a "bunch of jerks".

In the early morning of Oct. 1, 2003, Secretary of State Colin Powell received an urgent phone call from his No. 2 at the State Department. Richard Armitage was clearly agitated.

The Oppression of Hamas, According to Juan Williams

By MsUnderestimated | August 27, 2006 10:50 PM EDT
Well, I thought I had hope of late, as did MsUnderestimated, for Juan Williams. This past week, Juan has been on many radio and TV talk shows promoting his book "Enough," about the lunacy of the continuing victimhood embodied in the likes of current black leaders like Al Sharpton, Jesse Jackson, and Farrakhan. Well, tonight on Fox News Sunday, I was snapped back to reality.

It goes without saying that Los Angeles has its share of crime and crime problems. Then why would the Los Angeles Times devote a whopping 4,709 words, five photos (plus a small map), and valuable front-page space on its Sunday paper to the story of a murder more than halfway across the country in Tennessee?