The hot story in the blog world today is the story of Adnan Hajj, a photographer for the Reuters news service who has been exposed as faking shots in his work, most famously, a photograph of a suburb of Beirut, Lebanon in which he inserted fake smoke into the picture to make it look as though Israel was targeting civilians.

Use this thread to post relevant information about the story from blogs and elsewhere. Note to NB contribs: Email me if you want to get in on editing this thread so you won't have to post updates as comments.

Cindy Sheehan's Back, and the AP Still Thinks She's News

By Lyford Beverage | August 7, 2006 10:56 AM EDT
So, Cindy Sheehan is back in Crawford, and the Associated Press is continuing to act as her publicity agents. They still haven't shown any inclination to address any comments of hers that might be controversial. They still treat her as the grieving mother of a marine, rather than a leftist peace activist.

Given the shock by media members over how many Americans still believe Saddam had WMD before the March 2003 invasion as reported here and here, doesn’t it seem odd that there hasn’t been an MSM article scolding folks who still believe George Bush stole the presidential election in 2000? After all, if the Associated Press can suggest that Americans are deluded for not believing its WMD "facts”, shouldn’t it also question the sanity of the people who, despite the number of media outlets that counted the votes for themselves in early 2001, still believe Al Gore carried Florida?

To be sure, sometimes actor, sometimes radio talk show host, and sometimes radical left-wing blogger Alec Baldwin would be part of that group who believes Gore won, and he made that clear in a post at HuffPo on Sunday: “Gore, who limped off of the American political stage after the 2000 election after being gang raped by Dick Cheney, Justice Sandra Day O'Connor and James Baker, as well as their election-stealing goons in Washington and Florida, returns to face public gatherings to discuss his unbending assertions about global warming and the urgent need for America to take the lead in combating its causes and, perhaps, its effects.”

Honestly, I love the smell of Alec Baldwin in the morning. Don’t you? From there, Baldwin moved into full global warmingist mode (emphasis mine): 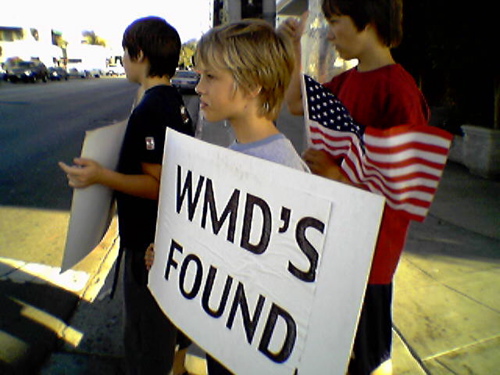 It’s one thing when an obviously deluded shill suggests that Americans are stupid because they disagree with him as reported by NewsBusters Saturday. However, it is quite another thing when the largest wire service in the country does it.

Yet, that’s exactly what transpired when the Associated Press published a report Sunday evening entitled “Half of U.S. Still Believes Iraq Had WMD”: “Half of America apparently still thinks so, a new poll finds, and experts see a raft of reasons why: a drumbeat of voices from talk radio to die-hard bloggers to the Oval Office, a surprise headline here or there, a rallying around a partisan flag, and a growing need for people, in their own minds, to justify the war in Iraq.”

Much like CNN’s Jack Cafferty the day before, AP didn’t offer the possibility that many of these believers feel Saddam moved his weapons to Syria or elsewhere before the invasion began. Such was certainly not on the mind of AP writer Charles J. Hanley, who, instead, wanted to make the case that Americans are just deluding themselves:

CNN Puts A Castro on the Payroll

By Mithridate Ombud | August 7, 2006 9:34 AM EDT
What better way for CNN to show where it stands on the issues of the day than to officially put Castro's daughter on the payroll as a contributor? Jon Friedman delivers a slap to CNN for this obvious attempt to position itself as the network with the most communist insight.

You have to wonder exactly what journalistic verities Alina Fernandez brings to the job. Granted, she is the host of a radio program in Miami and the author of "Castro's Daughter: An Exile's Memoir of Cuba." Make that a fairly DISTANT memoir, though. As USA Today noted, she was a toddler when Castro came to power 47 years ago and had only "sporadic contact" with her notorious father over the years.

CNN wants the public to believe that Fernandez has unique insights about her homeland and her father -- even though she left the country in 1993, disguised as a Spanish tourist, no less.

As liberally biased and prone to sniffing out conservative and Republican wrongdoing as many of the larger media organizations are, there actually is a more insane wing of the left-wing media made up of nutjob bloggers and "news" web sites.

This leftist press has been busily humming along the past six years, churning out conspiracy theories wild enough to make saner people's heads spin, ultimately with the objective of getting President Bush impeached should Democrats ever take control of the House in November. This is evidenced by the latest opus penned by the minority members of the House Judiciary Committee which is hardly anything more than a copy and paste job from the angry left media. Writing at NRO, Byron York gives us a peek:

There's a word you won't find in the text of Democratic Rep. John Conyers's new "investigative report" on the Bush administration, "The Constitution in Crisis: The Downing Street Minutes and Deception, Manipulation, Torture, Retribution, and Coverups in the Iraq War, and Illegal Domestic Surveillance." [Apparently brevity is not the soul of witlessness.] And the word is…impeachment. Yet the 350-page "Constitution in Crisis," released last week, is, more than anything else, a detailed road map for the impeachment of George W. Bush, ready for use should Democrats win control of the House of Representatives this November. [...]

While it's absent in the body of the report, the I-word does appear a few times in Conyers's 1,401 footnotes, which include citations of authorities ranging from the left-wing conspiracy website rawstory.com to the left-wing antiwar sites democracyrising.us and afterdowningstreet.org to the left-wing British newspaper the Guardian to the left-wing magazines The Nation and Mother Jones to the left-wing blogosphere favorite Murray Waas to the New York Times columnists Paul Krugman, Maureen Dowd, Bob Herbert, and Frank Rich to former Clinton aide Sidney Blumenthal to the New Yorker's Seymour Hersh. (Sources for "The Constitution in Crisis" even include one story co-written by the disgraced Internet writer Jason Leopold.)

Ashamed of their sins at Hiroshima and Nagasaki, Americans were actually awaiting payback along the lines of 9/11. You say you were unaware of any such feelings? That's only because your feeling was 'subliminal.' Your shame was 'unconscious.' Well, that, or the fact that you just don't have the same exquisitely refined sensibilities of Boston Globe columnist James Carroll.

A price spike 28 times larger than the proportion of global oil production lost? The loss of 0.4% of oil output leading to a 13% price increase?

In merely the latest in a string of Washington Post stories lamenting how Virginia is somehow chasing gay people out of the state by preserving traditional marriage at the ballot box, reporter Kirstin Downey revealed her quite partisan way of assembling evidence to prove her repetitive liberal thesis: 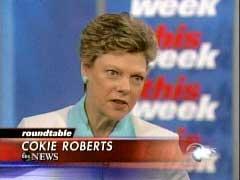 Something amazing happened on ABC’s “This Week” Sunday: Cokie Roberts practically floored host George Stephanopoulos with the political truth that most impartial individuals already know (video to follow). The discussion centered on what it would mean for the Democratic Party if Ned Lamont beat Joe Lieberman in Connecticut next week.

Reutergate Is News Everywhere But in the (formerly) Mainstream Media

Last night's report by Charles Johnson of Little Green Footballs that a "Beirut burning" photo that was clearly and clumsily doctored with Photoshop editing tools had made it way onto the wires from Reuters has morphed into what must be considered a full-blown scandal that should, by rights, shake the news service and other "Mainstream" Media outlets to their very foundations, and force them to reexamine how they conduct and control their photojournalistic efforts around the world.

Consider just some of what has happened in the 24 hours or so since my NewsBusters post very early Sunday morning: Subbing for reporter/columnist Dana Milbank on the Washington Post's snarky "Zeitgeist Checklist" feature in the Sunday opinion section, Post reporter Michael Grunwald goes on a tear, with every time on the ten-item list having a lame connection to Mel Gibson's anti-Semitic drunk-driving rant. Here's how it starts with the number one issue of the week, the Middle East conflict:

Four states, four regions, four local authors giving folksy, personalized takes on the candidates and the issues. You can't knock the Times' choice of format for giving readers a sense of Senate races across the country. But when it came to substance, it soon became clear that just beneath the authors' fly-over state surface lay Upper West Side attitude.

By Amy Ridenour | August 6, 2006 3:14 PM EDT
Something doesn't quite seem right with this glowing interview the Washington Post conducted with environmental activist Dr. Lara Hansen of the World Wildlife Fund.

Dr. Hansen is quoted saying, "When I was 5 or 6, my father read me an article in Science magazine about ozone depletion, which is what causes increased ultraviolet radiation..."

Here's a link to Science. Look at it and tell me a 5-or 6-year-old could understand it.

I venture to say I'm not alone in thinking that the new "Bold moves" series of car ads by Ford Motor Company quickly replaced the Dodge ones with the HEMI-obsessed schlub as the dumbest auto ads on the tube lately.