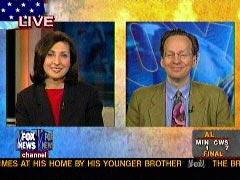 When Ellen Ratner went a couple weeks without any major liberal loopiness, one wondered whether perhaps Jim Pinkerton was having a salubrious effect on her. But things got back to normal this morning when Ratner let Pinkerton goad her into boasting that she supports "open immigration."

The controversial country rock singer Neil Young was interviewed on CNN’s “Showbiz Tonight” Tuesday evening (video link to follow). During the segment, Young talked about his new album which is largely devoted to anti-Bush and anti-war themes.

When CNN’s Sibila Vargas asked Young if impeachment, as discussed in his new song "Let's Impeach the President," was called for, Young responded:

“Yes, yes, I think it is. I think it`s called for, and so do a lot of other people. As a matter of fact, when I played in there for 100 people, they all stood up and gave me a standing ovation. There wasn`t one person that wasn`t standing. And we were looking for that kind of backing.”

As his answer ensued, Young made clear what this “backing” was:

A new book about former FBI Agent Mark Felt, the alleged "Deep Throat" of "All the President's Men" (Watergate) fame, says Felt believes journalist Bob Woodward violated an agreement not to describe him in print.

A Washington Post story by Lynn Duke about the new book "A G-Man's Life: The FBI, 'Deep Throat' and the Struggle for Honor in Washington," by Mark Felt and John O'Connor, leads with the information that Felt's late wife, Audrey Robinson Felt, committed suicide in 1984.

By paragraph four, however, the article reveals something entirely different:

...And the book tells of Felt's deep anger at what he believed was Woodward's violation of their source-reporter relationship. Felt did not want to be described in any way in print, but Woodward both described him and called him "Deep Throat" in 1974 in "All the President's Men."

"Mark has never seen himself as a chatterbox who gave up secrets," writes O'Connor in a lengthy introduction.

"If this book does nothing else, let it destroy that caricature. Deep Throat was a journalistic joke; the name never described Mark Felt. After Woodward revealed that he had a senior source in the executive branch, thereby breaking his agreement with Mark Felt, and after the journalist identified his confidant as 'Deep Throat,' the retired FBI man was furious -- slamming down the phone when Woodward called for his reaction" to the 1974 book.

At least one leading mainstream journalists isn't too happy about the revelation Friday that on Thursday the CIA fired an official who admitted being the leaker of top secret information about CIA prisons overseas used to hold al-Qaeda suspects. Bob Schieffer didn't withhold his personal opinion from his newscast as he introduced a CBS Evening News story by asserting that “it is no secret that the current administration does not like its people hanging out with news reporters without permission” and he described the firing as “a first -- a dubious first, to be sure.”

Citing the Washington Post story on the then-secret prisons and the New York Times article disclosing terrorist surveillance efforts, both of which won Pulitzer Prizes on Monday, NPR's Nina Totenberg declared on Inside Washington that nefarious Bush administration practices justified the decision to reward the two newspapers: "It's a good thing that they won for those intelligence stories because the Bush administration is investigating now and is threatening to subpoena and conceivably jail those reporters. So I think it's important that those stories be rewarded as something important to have done." (Transcripts follow.)

Advice to any Republican loyalists planning to watch a replay of this evening's Hardball: hide the sharp objects, put the firearms under lock and key, flush any potentially poisonous potions. With lovely-but-lethal Norah O'Donnell sitting in for Chris Matthews, this might have been the most unrelenting gloom-a-thon since Watergate. 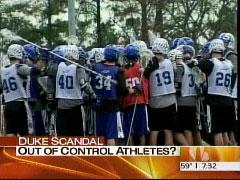 Does lacrosse lead to rape? NBC’s Today show seriously investigated that question in the April 21 edition. Matt Lauer teased the story with this scintillating query:

Lauer: "And still to come, the Duke lacrosse rape case. Is there something about the sport of lacrosse that causes players to act out of bounds?"

Actress Eva Longoria On The Early Show: "I Didn't Cross The Border, The Border Crossed Us" 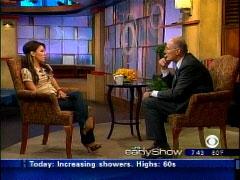 Not even Harry Smith’s day off from the "Early Show" on CBS could spare viewers from his liberal agenda. In a previously taped segment, Smith interviewed actress Eva Longoria about her new movie "The Sentinel." While most of the interview revolved around the movie, Smith couldn’t resist asking the Latin actress about her views on immigration:

CNN's Blitzer to Trump: Say "You're Fired" to Rumsfeld

Appearing on CNN’s The Situation Room April 20, real estate executive, and star of NBC’s The Apprentice, Donald Trump discussed his views of the Iraq war. During the 5:30pm interview, anchor Wolf Blitzer tried several times to get "the Donald" to use his famous catchphrase from his reality show to describe what he would do to Secretary of Defense Donald Rumsfeld if he were his boss:

Wolf Blitzer: "All right, now here’s the question. If Don Rumsfeld worked for you, what would you say to him?"

Blitzer: "Why wouldn’t you fire Donald Rumsfeld if he worked for you, and helped get you into this mess, as you described it, in Iraq?"

Blitzer: "But let me press you. Would you?"

Blitzer was finally satisfied when Trump stated that he would "make a change" and would "get out of that war as soon as possible."

By Ken Shepherd | April 21, 2006 2:00 PM EDT
Networks seem to be waking up to pricing effects, though free-market critics of the alternative fuel have issued this warning for years.

CNN Reporter: Union Strike Would Have Locked Up My Kids Bikes

By Ken Shepherd | April 21, 2006 2:00 PM EDT
Business contributor Andy Serwer shares how a doorman strike in NYC would have affected him.

A new conservative student newspaper, which bills itself as not for ''the faint of heart," hit a snag during its debut this week at Northeastern University.

Movie Critic Says Bushies "Surrendered to Self-Parody Some Time Ago"

The Los Angeles Times announced Thursday that it is suspending the blog of a columnist after another blogger exposed him for posting comments under various pseudonyms defending both himself and the newspaper. 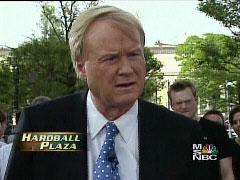 Something wild happens on Hardball whenever Chris Matthews ventures outdoors. It was during an outdoor panel when Zell Miller challenged Chris to a duel and last night outside the MSNBC studios Matthews called the current White House communications team: "Vicious, almost canine," and so sweaty that, "They wouldn't pass lie detector tests, they've got such a sweat problem."