By Jim Hoft | October 5, 2005 9:12 AM EDT
Somebody took the leash off Andy tonight! Andy Rooney was in rare form! Not that this will be a shock to anyone, but Andy Rooney attacked the Bush Administration tonight. I thought CBS was going to have a new culture after the embarassment from Rathergate? I thought CBS, "60 Minutes", etc, were going to work on a new culture on reporting the truth with their news segments? Obviously, this does not apply with Andy.

Concluding her Tuesday NBC Nightly News story on conservative resistance to the nomination of Harriet Miers, Andrea Mitchell asserted that while “critics on the right say” that it “leaves them depressed and disappointed," their “opposition may not matter for Miers' confirmation. So far, no Republican Senator has joined the chorus of critics." But those who watched ABC or CBS heard something very different. On World News Tonight, ABC’s Terry Moran reported that “in a sign of potential trouble ahead, Republican Senator San Brownback, a leading conservative on the Judiciary Committee, released a statement today saying: 'I am not yet confident that Ms. Miers has a proven track record and I look forward to having these questions answered.'" Over on the CBS Evening News, John Roberts related how “many members of the President's own party remain perplexed by his choice for this critical swing seat." Viewers then heard this soundbite from the Kansas Republican Senator: "You had a number of outstanding potential nominees who had been or were, or are, sitting judges. And so you look at this one and you say, well, why did you go here when you had so many other opportunities?"

By Mark Finkelstein | October 5, 2005 7:41 AM EDT
If you can tell a lot about a person by their friends and enemies, then it should be revealing to see how people are lining up on the Miers nomination.

On the enemies [or shall we say ‘serious doubters’] side: Rush Limbaugh, George Will, Mark Levin and Terence Jeffrey.

On the ‘friends’ side: Harry Reid, Chuck Schumer and, as of this morning, the Today show.

By Greg Sheffield | October 5, 2005 7:04 AM EDT
Investors Business Daily reports that the media have refused to report on the misbehavior of two of Sen. Chuck Schumer's staff members.

I may be a little late to the linking party, but InstaPundit brought many to this fascinating "Anatomy of a Photograph" from the Zombietime blog about a San Francisco Chronicle photograph from the local "peace" rally on September 24. If you haven't seen it, take a look. Every step back adds what Dan Rather loves to call "context and perspective." The truth about the "peace" organizers and marchers gets clearer.

NY Times 'Not Any Longer the Greatest Newspaper in the Land'

By Greg Sheffield | October 5, 2005 6:00 AM EDT
This time it's a liberal press critic who has unkind words for the New York Times. Jay Rosen, author of the PressThink blog, thinks the Grey Lady is no longer "the greatest newspaper in the land." What has replaced it, "some time in the least year or so," is the Washington Post.

By Bob Owens | October 5, 2005 1:40 AM EDT
Once upon a time, Editor and Publisher, as "America’s Oldest Journal Covering the Newspaper Industry," had a certain degree of respectability. These days, conspiratorial speculation and advocacy are every bit as important as fact, and the byline "By E&P Staff" means that anything to follow needs to be parsed very carefully to distill facts from wishful, often overtly partisan projection. A prime example of this concerns this August 6, 2001 AP Photo as seen in this MSNBC article.

E&P had this to say:

On its front page Tuesday, The New York Times published a photo of new U.S. Supreme Court nominee Harriet Miers going over a briefing paper with President George W. Bush at his Crawford ranch "in August 2001," the caption reads. USA Today and the Boston Globe carried the photo labeled simply "2001," but many other newspapers ran the picture in print or on the Web with a more precise date: Aug. 6, 2001.

NBC: Everybody Should be Mad About Miers Nomination

On this evening’s “NBC Nightly News,” Andrea Mitchell seemed to be advancing a position that would make both Republicans and Democrats angry about the president’s nomination of Harriet Miers to replace Supreme Court justice Sandra Day O’Connor.

Mitchell starts her segment with a statement from Texas Supreme Court justice Nathan Hecht that is clearly designed to raise the ire of pro-choice Americans: “She is pro-life. Harriet and I have attended pro-life dinners in Dallas years ago. She attends evangelical church in Dallas when she's there and has for 25 years that takes a very strong pro-life position.”

Then, Mitchell has a clip from Rush Limbaugh’s radio program today that should inflame conservatives: “The idea that we now have to roll the dice and wait a number of years to find out if this one works out, when it isn't necessary, is I guess the big bugaboo with me.”

What follows is a full-transcript of this report, along with a video link.

On tonight's The O'Reilly Factor (Tuesday October 4, 2005), guest Van Jones of the Ella Baker Center for Human Rights, a group that aims to address "human rights abuses" in the criminal justice system, parsed and weaved a group of crime figures to plaster Bill Bennett and mislead the television audience.

In a segment on racial attitudes in America, Jones said the following (emphasis mine):

Lou Dobbs to Judy Miller: "I Will Not Forgive Fitzgerald For What He Did to You"

On CNN tonight, Lou Dobbs declared his deep admiration for New York Times reporter Judith Miller and her well-chronicled 85-day stay in the pokey near the MRC headquarters in Alexandria, Virginia. She said it was an "eternity." Dobbs was all about giving special prosecutor Patrick Fitzgerald the Ken Starr treatment. 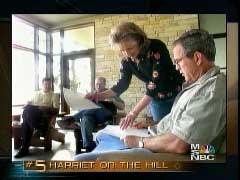 Leave it to Keith Olbermann to link the topics of Supreme Court nominee Harriet Miers and the 9/11 attacks. On his Countdown show on Tuesday night, the MSNBC anchor relayed that Miers was the person who handed President Bush a memo in August 2001 that warned of Osama bin Laden's desire to attack the U.S.

The following two reports from CNN (videos to follow) give us an amazing contrast between the efficiency of business in America, and the inefficiency of government.

Today, the city of New Orleans announced that it is laying off 3,000 government employees, or 40 percent of the city's payroll, due to budget constraints.  By contrast, in the same city hit by the same hurricanes, small and large businesses have a diametrically opposite problem – they can’t find enough people to work FOR them, and are at times willing to pay any sum to achieve such a goal.

To a large extent, this perfectly represents the disparate views being offered by America’s major political parties concerning the reconstruction of this region:

I've been reading all of the pro and con commentary in the Blogosphere and the MSM from fellow members of the Vast Right Wing Conspiracy and, while I sympathize mainly with those who believe Bush has missed an historic opportunity by not nominating a Brown, McConnell or Luttig, it appears to me most everybody is missing the fundamental point.

Or at least it's the cheapest shot.

The Associated Press published an article today about Barbra Streisand and Barry Gibb’s new album, with much focus given to one song that contains an anti-war theme, as well as Streisand’s political leanings:

“Barbra Streisand and Barry Gibb hadn't worked together in 25 years. But Gibb still knew the best way to express what Streisand was thinking -- especially when it came to the war in Iraq.”

“‘I loved the first stanza, because to me this war is kind of senseless, and I don't know why we're there,’ Streisand told The Associated Press.”