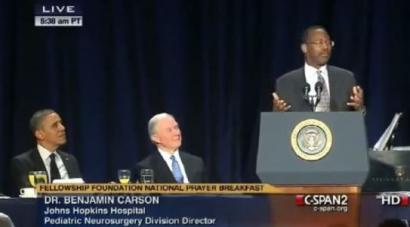 Newly-announced presidential candidate and neurosurgeon Dr. Ben Carson broke onto the national scene at a National Prayer Breakfast in 2013 when he, while sharing the same stage as the President, had the courage to rail against the deficit, political correctness, and the tax system while also standing up for religious values and advocating health savings accounts as an alternative to Obamacare.

Carson’s candidness to speak his mind within the President’s earshot caused a backlash from liberal elites in the media. CNN’s Candy Crowley questioned if Carson’s “weaving the Bible into some objections” he had with the President was “offensive.” The Washington Post’s Sally Quinn whined:  “The idea is to bring people together, not to push them apart. If you hadn’t known he was at the National Prayer Breakfast you would have thought he was the candidate at the Republican Convention” and added he “proceeded to offend” with an attack on political correctness in a “sometimes impossible to follow speech.”

Carson also drew the ire of HBO’s Bill Maher who called him a “half brilliant brain surgeon, half Tea Party Dumbass” and a “drooling idiot.” But perhaps the most vicious attack came from the The New York Times’ Frank Rich, who charged Carson wanted to strip black Americans of their voting rights as he called him “a front man for the GOP’s movement to strike at the heart of democracy, the right to vote” and added: “It’s a remarkable historic development that a half-century later the party of Lincoln’s affirmative-action program would yield an African-American presidential hopeful who has enlisted in the effort to take it away.”

The following are the media’s worst attacks (so far) on Carson from the MRC’s archives:

Candy Crowley Asks Panel If They Were Offended By Carson

Candy Crowley: “This was Dr. Ben Carson. He is a world-renowned pediatric neurosurgeon out of Johns Hopkins. He was at the prayer breakfast and he was talking about the idea of, you know, weaving the Bible into some objections he appears to have with the President’s approach. Take a listen.”
(Video clip)
Dr. Ben Carson: “When I pick up my Bible, you know what I see? I see the fairest individual in the universe, God, and he’s given us a system. It’s called tithe. Now we don’t necessarily have to do a ten percent, but this principal. He didn’t say, ‘If your crops fail, don’t give me any tithes.’ He didn’t say, ‘If you have a bumper crop, give me triple tithes.’ So there must be something inherently fair about proportionality.
(End clip)
Crowley: “Whoa! So, this was really interesting number one for the venue, number two for the person doing this. Not a, I mean, he may be a political person, but it’s the first time I’ve seen him on the national stage. What did you think of that?...Do you find anything offensive with, certainly it’s America, he’s entitled to his opinion. A lot of the talk was about was this the right place to do it?”
— Questions to panelists on CNN’s State of the Union, February 10, 2013.

“The interesting thing about Dr. Carson’s nearly 30 minute speech was that he barely mentioned religion. Except for the opening texts and a confused reference to Jesus at the end, his speech was completely political at an event that has always been strictly bipartisan. The idea is to bring people together, not to push them apart. If you hadn’t known he was at the National Prayer Breakfast you would have thought he was the candidate at the Republican Convention. ‘It’s not my intention to offend anyone,’ he said. ‘I have discovered, however, in recent years that it’s very difficult to speak to a large group of people these days and not offend anyone.’ Then he proceeded to offend some, with an aside ‘The PC police are out in full force at all times.’ ‘Political correctness,’ he believes ‘is a horrible thing. I’m very very compassionate and I’m not ever out to offend anyone. But PC is dangerous.’ Carson started off on education, in his rambling, sometimes impossible to follow speech. He decried our educational system saying it had been ‘dumbed down’ but advised ‘If you really want to be impressed , take a look at the chapter on education in my latest book, ‘America The Beautiful’ which I wrote with my wife.’”
— Washington Post’s Sally Quinn On Faith editor in article headlined “Does Ben Carson Have a Prayer?” on February 7, 2013.

“Dr. Alexander isn’t even the only brilliant brain surgeon who’s also a drooling idiot. Dr. Ben Carson is the director of pediatric neurosurgery at Johns Hopkins and the first doctor to separate conjoined twins at the head. And he believes the earth is 6,000 years old, and that homosexuality is akin to beasteality, and that the Bible calls for a flat fax. He’s half brilliant brain surgeon, half Tea Party dumbass. He doesn’t just operate on conjoined twins, he is one.
He’s also someone who many Republicans are encouraging to run for president in 2016, and why not? There’s no more attractive figure in the Republican Party these days than an anti-intellectual with an advanced degree. People like Antonin Scalia, Ted Cruz, and Bobby Jindal who are accomplished scholars on the outside, and on the inside a creamy layer of Michelle Bachmann.”
— Bill Maher on HBO’s Real Time, July 19, 2013.

“His undeniable talent as a surgeon puts weight behind his criticisms of Obamacare, which often spring from generalized anti-big-government sentiment. “By turning over control of the most important thing you have, your health, to the government and to bureaucrats, you have fundamentally changed the power structure of this nation,” he told me. “If you just go back and read the neo-Marxists, you’ll see why getting control of health care was so important to them; it was the only way to make a population dependent.” It’s from this fear that Carson draws his objections to the Affordable Care Act—not from his medical expertise. Being world-renowned for brain surgery speaks to deft eye-hand coordination, tireless work ethic and perceptive diagnostic skill in the realm of childhood brain anomalies. It does not imply an elevated or even rational perspective on health-care policy.”
— Politico Magazine, writer and physician James Hamblin tried to answer the question “Who is Dr. Ben Carson?”, April 21, 2014.

In NBC’s World, It’s Controversial to Be Pro-Constitution

Dr. Ben Carson: “I think government in the right way, when it understands what it’s supposed to do, is excellent. I would love to have a government that placed the Constitution of the United States at the highest level.”
Host David Gregory: “But how does it — there are some people who say that. That’s a very highly charged thing to say. Where is the Constitution not placed in the right level today?”
— Exchange on NBC’s post-Meet the Press Web-based “Press Pass” segment, June 1, 2014.

Frank Rich: Ben Carson a  “Front Man For the GOP’s Movement to Strike at the Heart of Democracy”

“There have been three Great Black Presidential Hopes in the GOP’s entire history, Carson included....Carson lends credence to the right’s continued effort to sanitize and rewrite America’s racial history to absolve the GOP of any responsibility for injustices then or now. In the context of both restrictive voting laws and the retro civil-rights jurisprudence of the John Roberts court, Carson’s contributions to this whitewashing effort matter more than Keyes’s or Cain’s....But the bigger scandal is Carson’s willingness to serve as a front man for the GOP’s movement to strike at the heart of democracy, the right to vote. It’s hard to believe now that as recently as 2006, the Senate voted 98-0 to reauthorize the Voting Rights Act that the Roberts court would tear asunder seven years later. This year and last in America were meant to be elevated by the anniversary celebrations of two great milestones of democratic progress, the Civil Rights Act of 1964 and Martin Luther King’s 1965 march from Selma to Montgomery. It has instead been one of the worst spells for racial conflict in recent memory, more in keeping with the centennial of Birth of a Nation, D. W. Griffith’s 1915 silent-film epic sanctifying the Ku Klux Klan and vilifying the freed slaves of the Reconstruction era....“Give us the ballot,” said King at Selma. It’s a remarkable historic development that a half-century later the party of Lincoln’s affirmative-action program would yield an African-American presidential hopeful who has enlisted in the effort to take it away.”
— Frank Rich but in a 4,300-word piece “Great Black Presidential Hopes” for the February 23, 2013 New York magazine.