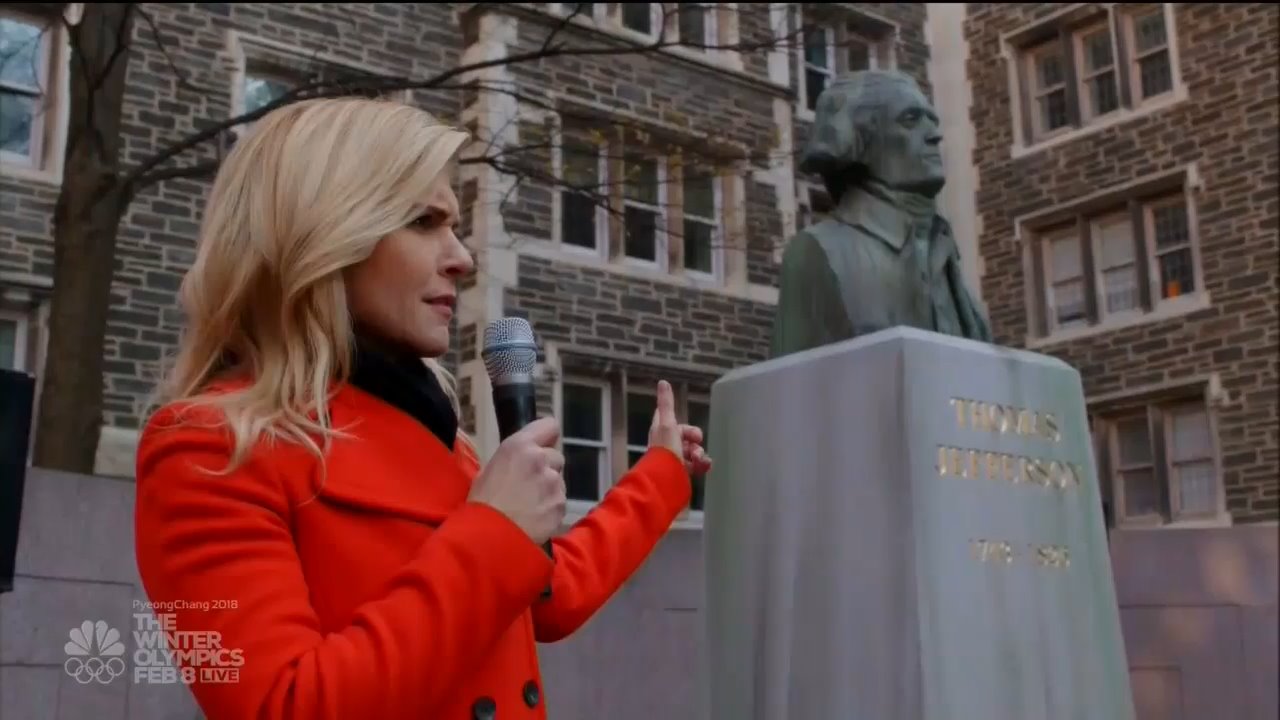 NBC’s Law and Order: SVU has always been a reliable series to find liberal bias, whether it includes painting Christians as rape apologists or gender fluidity as “cool.” But I think we were overdue for an episode that gives us a real, honest glimpse of what the show thinks of the right. Look no further than this week's episode title “Info Wars.”

The January 31 episode follows the sexual assault case of a fictional right-wing political pundit named Martha Cobb (Rhea Seehorn) at a rally on a college campus. Right off the bat, Martha is introduced giving a speech and mocking her protestors like a knockoff Ann Coulter, because I’m pretty sure that’s the only breed of conservative woman that exists to NBC.

The rally quickly dissolves into chaos when both Antifa and white supremacist groups clash with each other. As the conservative who organized the rally states, "We hate being associated with that crap [white supremacy], but it's not our place to turn people away.” Sadly, once the chaos clears, Martha is found to have been beaten and sexually assaulted with the pole of a protest sign in an alley near the event. (There's something extremely troubling about a show that rapes a character who is clearly based on a real person. Is this some sick liberal fantasy?)

In the meantime, the members of the NYPD precinct all develop mixed feelings regarding the case. Early on, a debate ensues between the detectives on Martha herself.

Olivia: So what about threats leading up to the rally?

Fin: Against Martha Cobb? All day, every day. –

Amanda: Well, we should still sort through them, 'cause some people really hate her.

Fin: You know she wants all Jews and Muslims to convert to Christianity, right?

Amanda: You know, 10% of what she says is completely outrageous, and it's to get your attention, but some of her positions actually make a lot of sense.

Olivia: Yeah, like closing down Planned Parenthood or deporting the Dreamers?

Amanda: Okay, we are in a bubble here though. Half the country is pro-life. Pro-family values, terrified of radical Islam.

Olivia: We're gonna have to continue this debate at another time-- or never-- because the DNA just came in.

Dominick: That was fast.

Apparently, according to SVU, wanting to defund Planned Parenthood and deport illegal immigrants is completely outrageous, but kudos to Amanda for acknowledging they live in a bubble and that half the country is pro-life!

Martha, being a conservative, is shown to be awful. She openly mocks Lieutenant Olivia Benson (Mariska Hargitay) as someone who “cried tears of joy when Obama was elected” and “said you'd move to Canada if Trump ever got in,” when Olivia tries to help her and even grouses, “Do you people ever stop with the empathy?” Ironically, there doesn't seem to be much empathy for this particular sex assault victim. (Below image: The official Law & Order: SVU account retweeted a fan who was having trouble deciding who to sympathize with: the conservative rape victim or her Antifa attacker.)

The investigation leads them to Antifa member Justin Vichinsky (Adam William Zastrow) who, upon hearing the news that Martha was raped, declares, “Cool. When's the parade? ... Maybe that's what she gets for blaming a hurricane that killed 50 people on the mayor's sexual orientation.”

In addition to that not-so-lovely comment, the station discovers Justin’s protest sign was the weapon used against Martha, along with his DNA under her fingernails, and her identifying him in a line-up, they create a pretty solid case against him. Now, that already sounds like an interesting twist, since so few real news pundits are willing to portray the Antifa movement as negative much less violent. Unfortunately, like most SVU episodes, there is more.

With the defense putting forward the theory that the rapist was really one of Martha's supporters, we quickly meet a new suspect in alt-right group leader Randy Platt (Jonathan Judge-Russo). Since Randy was at the rally and recognized by Martha, it’s not too long before questions come up over whether Martha lied about who attacked her to protect her base. After all, Randy is a fan. A racist, misogynist fan, but a fan nonetheless.

Randy spouts, among other things, racist dialogue like, "'We must secure the existence of our people and a future for white children.' Now, we try to be peaceful, but if we need to use violence to take our country back from the cultural elites and the globalist dupes...well, so be it." He talks about how he despises women except “white Christian stock who raise families and take care of their men.” Truly, he's a despicable left-wing parody come to life, down to being a "Grand Wizard" and wanting to "make America great again."

Peter: Now, Randy, why don't you tell me about this group you belong to.

Randy: Patriots for the American Way. And I don't "Belong." I'm a founder, a Grand Wizard.

Amanda: Well, remind me. When was it so great?

Randy: [Sighs] Beautiful. A couple of lib-tards on my case.

Amanda: Yeah, well, let's talk about where you were during the Martha Cobb speech.

Randy: On the quad, by the statue.

Amanda: You wanted to be close to her?

Randy: Well, protect her from the so-called "Progressives" who wouldn't let her speak.

Amanda: Protect her? 'Cause we saw your video. You hate women.

Randy: Not white Christian stock who raise families and take care of their men. Look, and--and if they do have a job, at least put on a pretty dress and a pair of heels.

Justin's (the Antifa supporter) defense attorney calls Randy to the stand and proceeds to expose his hateful beliefs - at one point they even have Randy pointing out minority members of the jury he'd want to purge from the country! Their case is that Randy raped Martha after she turned him down in a bar the night before.

When Olivia questions Martha again, Martha says she is "pretty sure" it was the Antifa guy who raped her. ADA Rafael Barba (Raúl Esparza) doesn't like hearing this, but Olivia reminds him, "We both know that the law doesn't require absolute certainty," and that it's for the jury to decide. Barba begins to cross-examine Randy but once Randy starts acting like a smug, condescending jerk again, Barba shocks everyone by suddenly asking for the case to be dismissed.

Barba: Mr. Platt... Did you assault Martha Cobb with a cardboard tube?

Barba: Why should we believe you?

Barba: It's a very simple question. Why should we believe you?

Randy: Because I'm giving you my word under oath.

Barba: That's all you got? Because, in my humble opinion, most of the people in this courtroom think your word is garbage... that you don't possess an ounce of principle or virtue.

Randy: [Chuckles] Yeah, well, most people are blind and stupid.
[Soft dramatic music]
♪♪
Barba: The People are unable to prove beyond a reasonable doubt that Justin Vichinsky sexually assaulted Martha Cobb. Accordingly, I move to dismiss the indictment.

Defense: The defense joins in this motion.

Judge: Uh, this is highly unusual, Mr. Barba. Are you sure that's what you want to do?

Barba: I am sure that the perpetrator of this crime will never be known to a legal certainty.

Wow, really? This racist ticked him off so much that Barba's willing to ignore physical evidence, let a potential rapist go free, and declare that the case can NEVER be tried? So much for justice. Even Olivia thinks Martha "deserves her day in court."

Nevertheless, Martha fares relatively well after the case, revealing to Olivia that she plans to write her new book on the experience condemning the criminal justice system. After all, she is a pundit who refuses to act “like the kind of spineless victim that I ridicule.” And there goes the last shred of sympathy we're allowed to have for a conservative woman who suffered rape. Even at the end, it all comes down to politics.