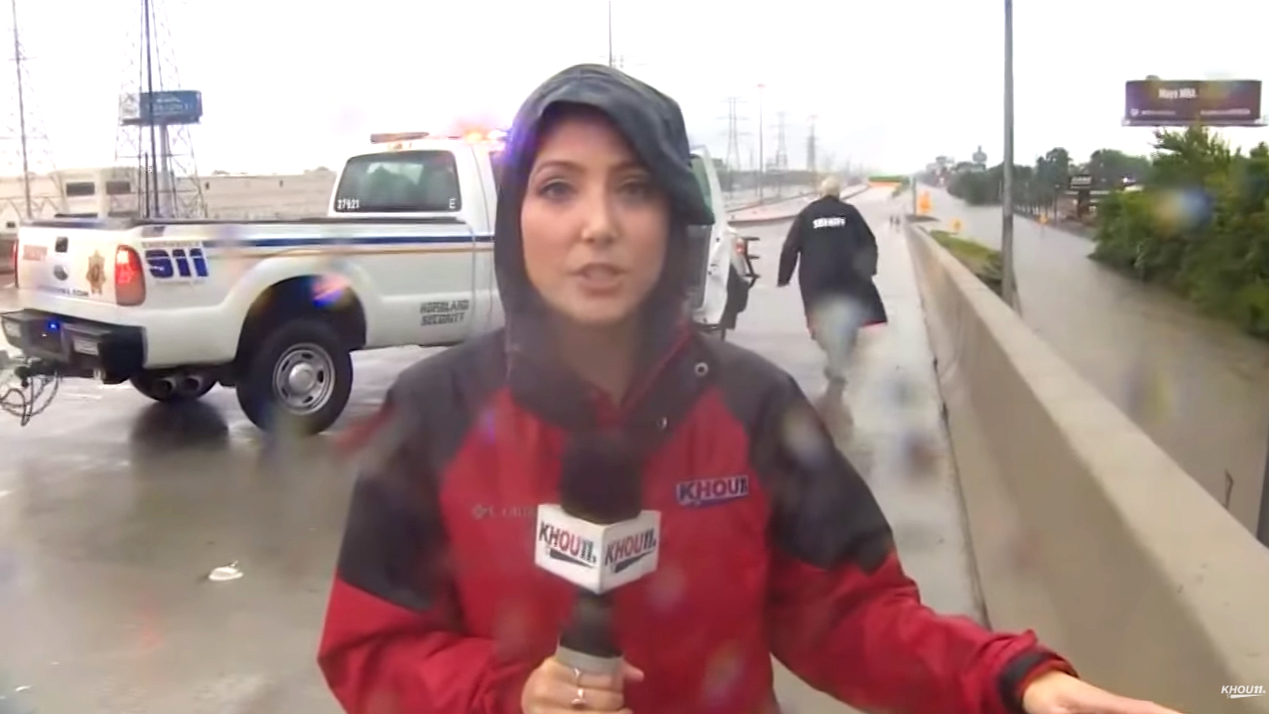 As Hurricane Harvey unleashed its terror on Texas, reporters braved the rain and wind to keep citizens informed of the danger. But that’s not all they did. Reporters from ABC, CBS and CNN also helped save lives – and one Weather Channel reporter even rescued an American flag.

“I did what any other human should or would do,” one reporter tweeted after her story went viral with millions of views. “We all need to love each other and watch out for each other.”

Working for a CBS affiliate in Houston, reporter Brandi Smith and photojournalist Mario Sandoval reported outside as the hurricane hit. While on an overpass, Sandoval spotted a driver trapped below in his flooded 18-wheeler. Smith took action when she spied a Sheriff pickup truck approaching with a boat in tow.

“Here we go, we have a boat coming,” Smith exclaimed on camera. “I’m going to flag these guys down.”

“Hold on just a sec,” she added, out of breath, running with the microphone in her hand as the pickup slowed down. “Are you guys headed down to the truck right here?” she asked the two men inside. “There’s a truck driver stuck here in about 10 feet of water.”

They weren’t headed there, she later confirmed. But they changed direction after she stopped them.

As water slowly filled the truck, Smith yelled to the driver to reassure him, “Sir, there’s a boat here.” And later: “Sir, they’re putting the boat in just now. They’re on their way.”

One sheriff revealed to her that just last year, at nearly the same location, a different truck driver drowned because he didn’t realize how high the water was.

As the driver crawled out of the passenger window into the rescue boat, Smith confessed, “I feel like I can finally breathe.”

“What went through your mind when you saw that water?” she asked the driver, named Robert, as he stepped out of the rescue boat onto land.

“Lord help me, yes, get me out of here safely,” Robert responded. “I just thank God that you guys were right here to get me.”

Smith reacted, “This is going to sound weird, but can I hug you? I’m so happy you’re okay.”

“I did what any other human should or would do,” Smith tweeted after the story went viral with more than two million views on Facebook. “We all need to love each other and watch out for each other.”

A CNN crew, together with a citizen rescuer Austin Seth, aided in the rescue of an elderly couple and their daughter from a flooded home in Dickinson, Texas.

As they began aiding Pam Jones and her parents, Elmore and JoAnne, CNN Newsroom anchor Ana Cabrera tried to ask Lavandera about what was happening.

“We were about to leave this neighborhood, there was a woman who had kind of flagged us down, that her and her two elderly parents who were still stuck inside home,” he began reporting, but then stopped. “So I'm going to put the mic down. We’re going to help them try to get into the boat so we can get them out of here.”

After he helped Elmore and two dogs into the boat, he told Cabrera to take them off air.

“I got to be honest, the daughter told us that her mother has Alzheimer's so that's complicating the situation,” he said. “So let's be a little bit delicate here because I don't know what kind of condition her mother is in.”

When they appeared back on air, they were all safely in the boat.

“We were about to leave the neighborhood, and we heard your voice," Lavandera repeated to Pam Jones after aiding in the family's rescue.

Besides its own employees, CNN also reported on an ABC affiliate’s reporter and crew who “helped aid a rescue of people trapped on a roof in Houston, Texas.”

The reporter, who appeared to be KTRK’s Foti Kallergis, saw a flashing light from a rooftop where several citizens appeared stranded.

“We can take you guys if you need,” he consoled them. As they shouted down to him, he repeated, “two handicapped, two sick and disabled and two in wheel chairs right now on the top of that roof. I have no idea how they got them on top of that roof.”

Later on, as he reported on the critical situation, he helped stabilize one man with a pacemaker leaving the roof.

“I’m going to have to pick that up,” he said. “I can’t let Old Glory just sit here like that.”

After interrupting his reporting to fold the flag, he added, “Not the perfect fold, but definitely a rescue from Hurricane Harvey.”