Our friends at the Associated Press have once again reminded us why any of their releases that contain the name ‘Bush’ must always be viewed skeptically. Their latest entry, “Bush Diplomacy Means Settling for Less” is one such example.

As reported by Editor and Publisher (with a hat tip to Free Republic), the daily circulation rate of America’s newspapers continued to fall the past six months:

In an article entitled “For Many in Iraq, Death is Quick and Capricious,” Steve Fainaru shared recent casualty totals, while specifically detailing the actions of some of America’s heroes that lead to their unfortunate death:

“The growing number of U.S. military deaths, which reached 2,000 last month and has since risen to 2,035, underscores a grim reality: There are countless ways to die in Iraq.”

This article was not only on the front-page, but was also 1,800 words.

By contrast, on page A16

Interviewed by his son, Chris, in a pre-taped session for Fox News Sunday, Mike Wallace of CBS’s 60 Minutes rejected as “damn foolishness” the notion of any liberal media bias. Mike Wallace contended, as if it were in doubt, that reporters are “patriots just as much as any conservative. Even a liberal reporter is a patriot, wants the best for this country.” Mike Wallace then condescendingly charged: “Your fair and balanced friends at Fox don't fully understand that.” He also confirmed that he had told Dan Rather that Rather should have resigned when his producers were fired over the Bush National Guard memos story, but when Chris Wallace suggested that story agenda reflected a bias -- “I think that they were quicker to believe it and, therefore, sloppier about checking it out than they would have been about John Kerry" -- Mike Wallace scorned the idea: "I don't believe that for a moment."

Chris Wallace moved on to his father’s new book, Between You and Me. Full transcript, of discussion about liberal bias and Memogate, follows.

Couric Finds McCain's "No Confidence" in Rummy "So Refreshing" 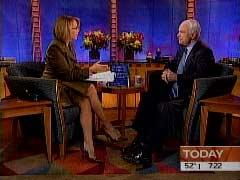 When's the last time you remember a broadcast network adopting a politician's self-aggrandizing label as its own description of him?

Yet that's exactly what NBC did on this morning's Today show.  Remember how during the 2000 primaries John McCain traveled around the country on his "Straight Talk Express" bus, beguiling reporters?

A CBS producer who led the network's coverage of the recent Michael Jackson trial has been marketing a brand of wine under the label "Jesus Juice," complete with a logo of a Christ figure sporting a Jacksonesque red glove, fedora hat, white socks, and penny loafers

NewsBusters.org has learned that Bruce Rheins, a high-level producer for such shows as the "CBS Evening News", and his wife, Dawn Westlake, began preparations for their marketing campaign while the Jackson case was still in court, registering a U.S. trademark for the words "Jesus Juice" in January of 2004, days after word got out that Jackson referred to wine by that term in allegedly attempting to seduce young boys.

A year later, the couple registered (under Westlake's name) the web domain JesusJuice.biz, apparently with the intent of partnering with a wine maker to create a product line bearing the Jesus Juice name, in a partnership or by purchasing the trademark.

TIME: Rove, Rumsfeld, and Snow Are About to Leave the Bush Administration Although the focus of the article is deputy chief of staff Karl Rove, TIME.com is reporting (hat tip to Drudge Report) that Secretary of Defense Donald Rumsfeld and Treasury Secretary John Snow will also be part of an imminent White House reorganization:

“Karl Rove's colleagues don't know exactly when it will happen, but they are already laying out the reasons they will give for the departure of the man President George W. Bush dubbed the architect. A Roveless Bush seemed unthinkable just a few months ago. But that has changed as the President's senior adviser and deputy chief of staff remains embroiled in the CIA leak scandal.”

“Several well-wired Administration officials predict that within a year, the President will have a new chief of staff and press secretary, probably a new Treasury Secretary and maybe a new Defense Secretary.”

Today in Paris, the Union of French Islamic Organizations (UOIF) issued a fatwa, or religious decree, against the participation of Muslims in the 10 days of rioting and arson in France. Typical of the mainstream media coverage of this action, is this report from Reuters:

“One of France's largest Islamic groups issued a fatwa against rioting on Sunday after officials suggested Muslim militants could be partly to blame for violent protests scarring poor neighbourhoods around the country. 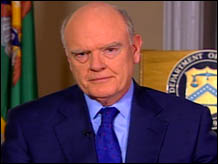 For those of you who were confused, that was an article in today’s New York Times complaining about the lack of tax cuts in the two reform proposals offered by the president’s advisory panel last week.

For those that missed it, Edmund L. Andrews wrote a piece this morning about the recommendations of this panel for future reforms to America’s tax code. In it, he appeared disappointed that there were no significant tax cuts being proposed:

The New York Times’ public editor, Byron Calame, wrote an op-ed this morning concerning the practice of marketing representatives creating ads that either intentionally look like articles to mislead the reader, or watermark images that advertise companies and their messages right behind newsprint:

Hollywood's fantasy that Republicans could sweep the nation if they only put up a "pro-choice" candidate animated last Sunday's episode -- and Janeane Garofalo got in a blast at conservatives. NBC is promising an "unprecedented West Wing event" in tonight’s sweeps stunt of a live debate between liberal presidential candidate "Matt Santos," played by Jimmy Smits, and the anti-religious right Republican "Arnie Vinick," played by Alan Alda. Last Sunday, Vinick was angered by an independent ad which attacked Santos for opposing parental notification and a ban on partial-birth abortions, policies the otherwise pro-choice Vinick backs: "Who told them to drag abortion into my campaign?" Demanding the ad be pulled, Vinick asserted: "Do you realize how many states my pro-choice position puts on the table?" Later, Santos remarked: "Vinick's appeal is that he's a different kind of Republican, moderate, reasonable, pro-choice."

In one scene on the October 30 episode, Santos' media chief, "Louise Thornton," played by Janeane Garofalo, sounded just like the real-life Garofalo when she argued that the campaign must go negative against Vinick, and she cited the good being done by a Senator she got elected by going negative against his opponent: "I'm proud that he votes against every reckless Republican tax cut. We're the blue team and there's a real war going on. Josh, do you want the right wing to get their judges?"

Friday night on MSNBC’s Scarborough Country, West Wing star Bradley Whitford trashed Bush as “a radical right-wing President who now seems to be incompetent.” A Zogby International poll of West Wing viewers found they tilt to the left, with 59 percent saying they’d vote for Democrat Smits/Santos compared to just 29 percent for Alda/Vinick, Lisa de Moraes reported in Saturday’s Washington Post. But the viewers recognize the show’s bias: “A full 77 percent of respondents said The West Wing has a liberal bias.”

The MSM has provided a fair amount of coverage today of the "pirate" attempt to hijack a cruise ship off the coast of Somalia. But most, if not all, of the MSM outlets have refused to identify the "pirates" [and their leader Mohamed Abdi Hassan] as Islamic terrorists.  "Pirate" has joined "bomber," "militant," "insurgent," and "freedom fighter" as a euphemism for "Islamic terrorist."

On NBC’s “Meet The Press” this morning, host Tim Russert stocked his panel with three left-of-center journalists – Nina Totenberg of NPR, Ron Brownstein of the Los Angeles Times, and David Gregory of NBC News – to discuss the events of the week. When they got to the nomination of Samuel Alito to replace retiring justice Sandra Day O’Connor, Russert mentioned that when Bill Clinton was president, both Ruth Bader Ginsburg and Stephen Breyer, despite obvious Liberal leanings, were approved by a strong majority of both Democrats and Republicans. “And they say, ‘Why can't we have the same courtesy to conservative jurists under President Bush?’"

In response, Totenberg said: “If you look at the Ginsburg nomination, for example, she'd been a judge, I think, for 12 years. She'd been, actually, a pretty conservative liberal judge, if you can be such a thing.” This could be the first time that anyone has referred to the former general counsel for the American Civil Liberties Union as being “pretty conservative.”

The new ruling by the 9th U.S. Circuit Court of Appeals stating, "There is no fundamental right of parents to be the exclusive provider of information regarding sexual matters to their children...Parents have no due process or privacy right to override the determinations of public schools as to the information to which their children will be exposed while enrolled as students," has Californians in an uproar, and rightfully so!