Rene Syler on Wednesday interviewed former President Jimmy Carter yesterday in the 8:30 a.m. EST half hour of the Early Show, tossing him softball after softball which he hit out of the park while plugging his book, Our Endangered Values. In the transcript of her questions below, you'll see her setting up Carter on the "separation of church and state" theme which Carter used to pontificate about conservative dominance of American politics, particularly by the religious right.

Ted Olsen in a posting today to the Christianity Today weblog provides a detailed fisking of Los Angeles Times coverage of an IRS investigation of the Rev. George Regas, a liberal Episcopalian priest.

By Noel Sheppard | November 10, 2005 2:00 PM EST
CBS wasnt alone. Headlines like The Dollars Decline Does Matter, Consumers Could Get Caught Under Falling Dollar, and The Dangerous Dollar were all the rage as Americas currency was approaching its lows.

Other media also cited the Bush administrations economic policies as the cause of these declines, with typically calamitous predictions such as a possible end to foreign purchases of Americas government debt, as well as blaming the rise in oil

CNN’s Bruce Morton filed a report today wherein he compared the impact of yesterday’s election results on President Bush to the title of the children’s book “Alexander, George, and the Terrible, Horrible, Very Bad Day.” He went on to suggest that Tim Kaine’s victory in Virginia was big because it “showed that a moderate Democrat can win in a very red state.” Morton neglected to inform the viewer that Kaine was replacing a Democrat as governor.

Morton then depicted Kaine’s victory as “a big boost for outgoing governor Mark Warner, a 2008 presidential possibility. And it was a rejection of the president who came to Richmond on election eve to campaign for Republican loser, Jerry Kilgore.”

Finally, Morton suggested that as a result of these elections, President Bush now has less clout with Republicans in Congress, as well as with Republican governors.

Asked by Larry King Wednesday night live on CNN whether she had a personal agenda against President George W. Bush, Mary Mapes, the CBS News producer fired in January for her role in the forged National Guard memos and representations she made to her colleagues, shot back: "Oh my God no, no of course not.” She insisted that “Dan Rather and I did stories on Hillary Clinton, we did stories on the Clinton administration and terrorism...you question whoever is in your cross-hairs." Hillary Clinton, however, was hardly in her “cross-hairs” when she produced for Rather a 24-minute tribute to her that aired on the May 24, 1999 60 Minutes II and included such tough statements from Rather as, "once a political lightning rod, today she is political lightning" and: “The agenda she lays out seems downright old-fashioned. She sees her work as focusing on children and families..." (See more below.)

Back to CNN Wednesday night, King fretted: “Who got you? The bloggers?” Mapes said she knew of the Drudge Report, but “I really wasn't aware of these really political blogs” and so when “the next day at about 11 o'clock this stuff, this drumbeat started saying the documents were false and I was just incredulous because the White House hadn't raised it, they hadn't indicated this in any way, we didn't have any evidence of that and they went nuts." As she did on Wednesday's Good Morning America, as recounted in this NewsBusters item by Brian Boyd, Mapes maintained her stance that no one has disproved the authenticity of the memos: “Their criticisms last year really didn't reach the bar of proof at all."

Nets Paint Results as Slap at Bush, But in '97 Saw No Rebuke of Clinton in GOP Wins

Eight years ago, when a Democrat was President and Republicans won the governorships in New Jersey and Virginia, CBS Evening News anchor Dan Rather gave the results a piddling 12 seconds, didn't even utter the names of the winners and made clear that local issues -- “the high cost of automobile insurance and a tax on car ownership” -- were “the key issues.” But on Wednesday night, the same newscast gave a minute and thirty seconds to the election results which included names as anchor Bob Schieffer inserted an ideological label into his description of Virginia: “In New Jersey, Democrat Jon Corzine won one of the nastiest races ever. He'll be the next Governor there. And in conservative country, Virginia, another Democrat, Tim Kaine, won the Governor's race there.” Gloria Borger then declared that “this was not a great night for President Bush, particularly in the state of Virginia.” She cited how “he went in and he campaigned for the Republican candidate for Governor who lost, and, Bob, this was a state the President himself won by eight points in the last election." Borger ignored a basic fact which undermines her analysis: The Democratic candidate for Governor of Virginia won in 2001 when Bush's approval rating, just two months after 9/11, was over 80 percent.

NBC's even more flagrant bias contrast, ABC's crediting of Clinton's good economy for the GOP wins and Morton Kondracke's prediction on FNC that “if I were Howard Dean and I looked at these results, I'd be really disappointed” because, despite Bush's plunging popularity, Democrats did no better this year than four years ago in the same races, follows

Borger on Yesterday's Elections: This Was Not A Great Night For President Bush

On tonight’s “CBS Evening News,” Gloria Borger said yesterday’s election “Was not a great night for President Bush.” Moreover, in the aftermath, Republicans are now “worried about losing the House, and maybe the Senate.”

In addition, she claimed Republicans want the president to establish an agenda. Failing that, “just get out of our way for the 2006 election.”

Similar to other mainstream media reports today, there was no mention of Mayor Mike Bloomberg’s re-election victory in New York City.

What follows is a full transcript of this report and a video link.

That's a lot of beatings, blows and black eyes for a party that stayed exactly where they were a week ago. I have to say, I was quite surprised, I didn't even know George Bush was running for governor in all those states.

* That was a rhetorical question. Of course I know this was due to bias, unfound hopefulness and irrational exuberance.

By Brent Baker | November 9, 2005 5:51 PM EST
At a Tuesday meeting with CBS News staff, new CBS News President Sean McManus asserted that the people of CBS News “do a darned good job at” shutting out their political opinions and so “I don't see” any liberal bias in CBS News coverage. Vaughn Ververs recounted in a Tuesday evening posting for the “Public Eye” blog on CBSNews,com: “Asked if he feels the need to address perceptions that CBS has a left-wing bias, McManus said no, adding, 'it’s very difficult for any reporter or producer to completely and totally shut out his political opinions, but what I’ve seen at CBS News, people do a darned good job at doing that. I guess if I saw that creeping into our coverage I would have to address it, but I don’t see that in our coverage, I think we have been falsely accused of that at times.'”

McManus, who is maintaining his job as President of CBS Sports, has succeeded Andrew Heyward who considered liberal bias a fantasy of “extremists of the right.” (Heyward's 2000 remarks follow, as well as a fawning question McManus' father once posed to Fidel Castro.) 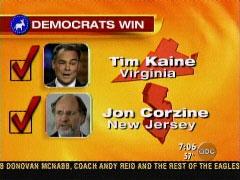 Democrats won yesterday’s gubernatorial elections in New Jersey and Virginia, both offices they held going into Tuesday’s voting, and Democrats lost the Virginia lieutenant governor’s race, a switch in favor of the GOP. That’s hardly an impressive show of electoral strength.

What REALLY happened in the 2005 elections

By Lyford Beverage | November 9, 2005 4:21 PM EST
The media storyline from yesterday's election results has been, for the most part, that Democrats picked up big victories, and that it was all bad news for the Republicans. And that President Bush, bogged down in incompetence (Hurricane Katrina) and malice ("he lied - people died!"), pandering to the right-wing (Alito) and heading an out-of-control criminal White House (Libby and Rove) is acting as an anchor, dragging down the Republican Party, leading to these spectacular Democratic wins. We see it in the New York Times:

After months of sagging poll ratings, scandal and general political unrest, the Republicans badly needed some good news in Tuesday's elections for governor. What they got instead was a clear-cut loss in a red state, and an expected but still painful defeat in a blue one. The Republican loss in Virginia, which President Bush carried with 54 percent just a year ago, came after an 11th-hour campaign stop by Mr. Bush and the kind of all-out Republican effort to mobilize the vote that reaped rich rewards last year.