With No Bad News to Report From Iraq's Election, Attention Shifts to Toledo

By Greg Sheffield | October 21, 2005 12:28 PM EDT
After the momentous elections in Iraq that approved the constitution and produced a higher voter turnout than in America, you'd think the media would want to give the events more coverage.... Actually, at this point I'm not surprised, nor are many regular readers at NewsBusters.

Victor Davis Hanson writes in National Review that with no bad news to report from Iraq, the "race riot" in Toledo was needed to keep bad news in front of the public.

By Greg Sheffield | October 21, 2005 11:58 AM EDT
Fernando Díaz Villanueva in the Spain Herald came up with a mock news story that seems strangly familiar.

By Clay Waters | October 21, 2005 11:58 AM EDT
NYT movie critic Manohla Dargis has mostly praise for the new movie "North Country," starring an un-prettified Charlize Theron, though Dargis admits it's an "old-fashioned liberal weepie" (albeit one "with heart") based on a true story of a class-action sexual harasment suit at a Minnesota mining company. 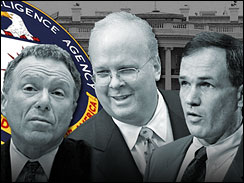 David Gergen was questioned this morning during a CBS segment concerning the possibility of indictments to White House chief aide Karl Rove and Dick Cheney chief of staff Scooter Libby.  The “Early Show's” Bill Plante mentioned that the White House is behaving like it’s business as usual. Gergen responded: “Bill, I was in the Nixon White House during Watergate, and we pretended that we were all about business as usual. And we had a president who was talking to the portraits. It was not business as usual, but you have to say it.”

Gergen later in the interview said: “This is a presidency that has almost collapsed.”

In his column for the Chicago Sun-Times, Mark Steyn notes that reporters seemed a bit allergic to mentioning that "militants" in Russia (after the latest violence in Nalchik) and elsewhere could be described more clearly as "Islamic militants," but that wasn't something they wanted to underline:

The Associated Press’s Laurie Kellman clearly had a very difficult time hiding her disappointment that newly indicted Rep. Tom DeLay (R-Tex) wasn’t frowning in his mugshot taken at his arrest yesterday afternoon in Texas. In fact, even the headline of her article, “DeLay Smile May Foil Democrat Campaign Ads,” couldn’t cover up her frustration:

“Why is Tom DeLay smiling? After all, he's been indicted. Forced out of his job as House majority leader. And called into court for fingerprinting and a mugshot like a common criminal.”

Kellman continued with no semblance of concern that her lack of objectivity would be apparent to even the most uninformed readers:

A Tale of Two Bills by the AP

The AP is still reporting news from Capitol Hill in its own "fair and balanced" way. Two stories were posted today concerning the status of bills in Congress.

MSNBC's Keith Olbermann led Countdown again Thursday with what he's whittled down to the simple heading as “The Leak,” and soon forwarded the notion that the Bush White House is in a “crisis” similar to that which enveloped the Clinton White House after the Monica Lewinsky revelation. Interviewing former Clinton Chief-of-Staff Leon Panetta, Olbermann pointed out how “the rundown for tonight's show was given a title by our producer that shook me. The title simply was, 'White House in Crisis.' I already hosted a news show on this network that had that title some years ago. Is it applicable now? Is in fact in your opinion this White House in crisis?" Panetta agreed.

Maybe Olbermann's old 1998-99 show carried that title for a while or was a sub-title, but I believe his 8pm EDT show back then was titled The Big Show. And on that program in the summer of 1998, Olbermann infamously ruminated about how “it finally dawned on me that the person Ken Starr has reminded me of facially all this time was Heinrich Himmler, including the glasses.” Olbermann also wondered, “would not there be some sort of comparison to a persecutor as opposed to a prosecutor for Mr. Starr?" (Fuller quotations follow, as well as a link to video of Olbermann's 1998 smear.)

It's nothing to do with political bias, but I think PC Magazine columnist John Dvorak's latest column makes an interesting allegation: that the technology media favor Apple products over Windows-based ones. Here's an excerpt:

With 90 percent of the mainstream writers being Mac users, what would you expect? The top columnists in the news and business magazines fit this model too. The technology writers fit this model. The tech writers and tech columnists for the New York Times, the Wall Street Journal, Newsweek, and Fortune are all Mac users. I could list them by name, but I'd hate to leave one out. Maybe I'll blog them by name. I could list 50. Readers should thus not be surprised by the overcoverage of Apple Computer. Every time Steve Jobs sneezes there is a collective chorus of "Gesundheit" from tech writers pounding away on their Macs. [...]

What's bad for Microsoft is that the bias against it is subtle—kind of like any sort of media bias, whether religious or political. As one critic once said regarding the supposed left-wing slant of the daily news media, "It's not what they write, it's what they write ABOUT that matters." Story selection. Microsoft can roll out a dozen cool products, and the media goes ga-ga over the video iPod—a rather late-to-market Apple product.

Is Dvorak right or wrong? Please keep the flames to a minimum.

While the House of Representatives was getting serious about legal reform, CNN was calling it “silly” and other TV news outlets ignored it.

The House passed the “cheeseburger bill” October 19 – a bill that makes people, not the food industry, responsible for consequences of their eating habits. The bill passed 307 to 119 and will go to the Senate.