Jon Carroll has this to say about the New York Times / White House animosity:

Since George W. Bush has done more to protect the future of Israel than any Democrat on the planet, why would he want to "campaign against the Jews"? He continues:

Do we really believe that the terrorists are reading the New York Times for clues on what to do, or not do, next?

To use the media for spreading an effective and creative image of the resistance.

He's not just a reader, he's also a contributor.

The Media's Vote of No Confidence in the Economy

Over the past few years, the media have consistently given a vote of no confidence to the U.S. economy, my colleague Amy Menefee wrote over at BusinessandMedia.org yesterday.

The On Point radio show on WBUR public radio in Boston (no liberal leaning there!) featured host />/>Anthony Brooks and several panelists chewing over the NYT's bank spy story, including reporter Eric Lichtblau, the reporter responsible (or should we say irresponsible) for coauthoring the piece.

Can the NY Times be Trusted to Decide Our National Security?

Since the New York Times is now the organization that decides what national security information deserves to be kept secret, Bob Cox wonders if they can be trusted with such a huge responsibility.

Fox News Blacked out in Mexico During Election

Representatives from Fox News, CNN, and the BBC were told that broadcasting opinion surveys about Mexico's upcoming election eight days before the voting was forbidden. They are also banned from analyzing the candidates' weaknesses and reporting on campaign activities.

CNN and BBC both have separate feeds from the one shown in America (No Lou Dobbs en Español), so they have no problem complying with the rules. Fox News has only one feed, and would have to alter its entire programming.

Associated Press TV reporter Lynn Elber profiled CNN commentator Jack Cafferty on Wednesday, and when she asked him about his sense of personal responsibility -- we're not shown the question, but I'm sensing he was asked about popping off without thinking it through --  "Cafferty, his memory triggered, segues directly into recounting the newscast in which he got a jump on then U.S. Rep. Tom DeLay's legal woes."

Tech Central Station has a report from the "Satire News Service" about a 1943 New York Times story revealing that the U.S. had successfully cracked Germany's Enigma code. The Times also reported that Japan's code, in an operation called MAGIC, had also been broken.

Wow -- This is from the Bureau of Economic Analysis (BEA) announcement:

Is Bush being hypocritical when he attacks the New York Times’ irresponsible revelations of yet another terrorist surveillance program? A headline in Thursday’s Times hints at it -- “Behind Bush’s Fury, a Vow Made in 2001 -- Analysts Are Divided on Effects of Bank Program’s Disclosure.”

ABC’s John Stossel was a guest on MSNBC’s “Scarborough Country” Wednesday, and it is quite safe to say that he’s not buying into any of the recent alarmism concerning global warming. As a result, he and host Joe Scarborough had a lot of fun at Al Gore’s expense (video link to follow).

Scarborough began: “…for Al Gore and Bill Clinton to say it`s causing flooding and causing hurricanes and it may have caused Hurricane Katrina, that`s just ridiculous, isn`t it. There is no proof of that, is there?”

“No. And the serious scientists scoff at that. The warmer water can encourage hurricanes, but they run in cycles. But the alarmists always want you to think it`s man`s fault so you will turn your life over to them and they can tell you what to do.”

Scarborough responded: “I remember being warned in Florida five years ago about the next cycle, that from 1900 to 1945, we didn`t have a lot of hurricanes. We had a lot of hurricanes and it slowed down for the next 60 years and they said there is a time where the water will heat up again and yet the A.P, other news agencies seem to give Al Gore a free pass.”

Scarborough then hit the nail right on the head: 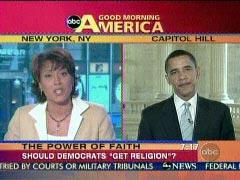 Do you know the joke about the guy who goes to the doctor and is informed he needs an operation that would cost $25,000? When he asks if there are any cheaper alternatives, the doc responds, "well, for $75, I can touch up your X-rays."

That's Barack Obama's approach to healing the Dems' affliction when it comes to dealing with religious conservatives on social issues. He's not looking to change the substance, only the appearance.

MRC's Geoff Dickens reports that MSNBC's "Hardball" on Tuesday also pushed the line that Bush was pandering to conservatives with media criticism. After claiming, like a liberal talking-point machine, that unnamed "national security experts" disagree with the president that the New York Times has harmed national security, since the Bush people announced vaguely in public that they would monitor terrorist finances, reporter David Shuster picked up on the Ed Henry echo: 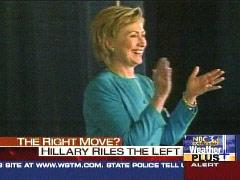 If she was watching 'Today' this morning, you can imagine Hillary Clinton using her best North-Korean-parliament rhythmical clapping in response to what she saw.  It might be 'ronery' in her Georgetown or Chappaqua spreads, but it's always heart-warming to know you've got friends at the highest-rated morning show.

CNN on the NYT: Bushies 'Beat Up On a Newspaper' To Pander to Conservatives

The liberal media party-line has hardened on the breathtaking arrogance of the New York Times, the self-appointed spoilers of secrecy. The White House is apparently insincere in its criticism -- it's merely pandering to the right-wing base.