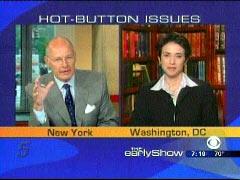 Given NewsBusters' goal of exposing outrageous liberal media bias, perhaps I should switch focus from the Katie-less Today to Harry Smith & Co. at the Early Show. I rarely check in on the show, which has languished seemingly forever in last place. But, happening upon it this morning, Smith's bald-faced bias left me breathless.

NRO Media Blog has passed along a column at Townhall.com by author and military expert W. Thomas Smith Jr. that describes an interview with an ABC News reporter who's overwhelmed with anti-war fervor:

In a remarkable interview on the Hugh Hewitt radio show this afternoon (Mon. June 26, 2006), Doyle McManus, Washington D.C. bureau chief for the Los Angeles Times, publicly admitted that the column in his paper on Friday, the one in which a secret financial tracking program was reported, could aid terrorists who target the United States. The original column was written by Josh Meyer and Greg Miller, but McManus played a role in the decision to go forward with the story's publication.

The eye-opening interview, with audio, is at Radio Blogger. The key exchange:

HUGH HEWITT: Is it possible, in your view, Doyle McManus, that the story will in fact help terrorists elude capture?

DOYLE McMANUS: It is conceivable, yeah, although it might be worth noting that in our reporting, officials told us that this would, this disclosure would probably not affect al Qaeda, which figured out long ago that the normal banking system was not how it ought to move its money, and so turned to other unofficial and informal channels ... 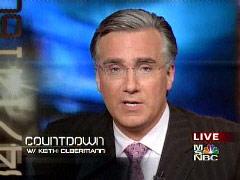 It became a laugh line long ago: "If we can't [insert your favorite dubious activity here], the terrorists will have won."

Angling for Amnesty on ABC's 'This Week'

On the roundtable of Sunday's edition of "This Week with George Stephanopoulos," Newsweek columnist and Newsweek International editor Fareed Zakaria declared he was going to say "something controversial," that he favored amnesty for Iraqi insurgents. ABC White House correspondent Martha Raddatz said she didn't see why that was controversial, just a required step. When Stephanopoulos suggested amnesty "makes sense," CNN anchor Lou Dobbs said the idea "sticks in my craw."

"At times, the mood turned hostile toward the lawmakers in the stately white building behind the stage," wrote The Washington Post in its coverage of the event. Then, without explanation, the story offered this on-stage quotation from a religious broadcaster: "Let's pray that God will slay everyone in the Capitol." Clearly, the reporters didn't know about the experience that Pentecostal Christians call being "slain in the Holy Spirit," in which they believe they are transformed by a surge of God's power. The result was a journalistic train wreck...

After the funeral of Pope John Paul II, the International Herald Tribune described his vestments and added: "Tucked under his left arm was the silver staff, called the crow's ear, that he had carried in public." Actually, that ornate shepherd's staff is called a crosier (or crozier), not a "crow's ear." And did a BBC producer really write a subtitle that said "Karma Light" nuns were mourning the pope (as opposed to Carmelites)?

Bias is a problem. But, in my experience, apathy and ignorance cause most of these laugh-to-keep-from-crying gaffes. It would help if newsroom executives spent more time thinking about intellectual, cultural and even spiritual diversity, in addition to focusing on gender, race and class.

It's no surprise that journalists by default assume Christians are militant crusaders, as opposed to the fundamentalist "freedom fighters" who chop off heads throughout the Mideast.

15 People Who Make America Great
Newsweek Magazine
#4 Brad Pitt
"If it wasn't for Brad Pitt, most Americans would never have heard of Namibia. They might not know about AIDS orphans in South Africa, or the plight of children in Haiti, or what transpired at the World Economic Forum in Davos, Switzerland."

NRO on NYT: Take Away Their Stinkin' Badges!

National Review Online published an editorial today on the unfolding outrage over the New York Times deigning itself the country's Moderators-in-Chief -- we shall declare what the nation shall debate! -- and called for the government to take away their press credentials, their little badges of honor and access:

The Case for Prosecuting the NY Times

By Greg Sheffield | June 26, 2006 1:00 PM EDT
Gabriel Schoenfeld, senior editor for Commentary magazine, writes in the Weekly Standard about the justification for prosecuting journalists who endanger the country by revealing sensitive information. He cites a very concrete example of this endangerment: Pearl Harbor. 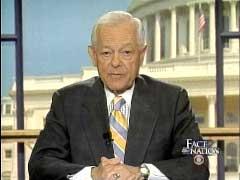 The chairman of the House Homeland Security Committee, Rep. Peter King, says the New York Times should be prosecuted for revealing the program for monitoring international money-transfers.

President Bush also denounced the revelation, saying, the disclosure was "disgraceful" and does "great harm to the United States of America."

Crisis Over: Boys Fail Slightly Less Than We Thought

A train wreck of reporting and editing is displayed in Study Casts Doubt On the 'Boy Crisis' by the Washington Post's Jay Mathews on the front page. It's based on a report by a think tank called Education Sector, and tries to refute years of research showing boys' collective disadvantage in education. The logic of this report is illustrated in the following quote from the report itself, written by Sarah Mead:

The real story is not bad news about boys doing worse; it's good news about girls doing better.

In fact, with a few exceptions, American boys are scoring higher and achieving more than they ever have before. But girls have just improved their performance on some meas­­­ures even faster. As a result, girls have narrowed or even closed some academic gaps that previously favored boys, while other long-standing gaps that favored girls have widened, leading to the belief that boys are falling behind.

President (make that Times editor) Bill Keller must be feeling the heat about his paper’s irresponsible banking spy scoop from Friday.