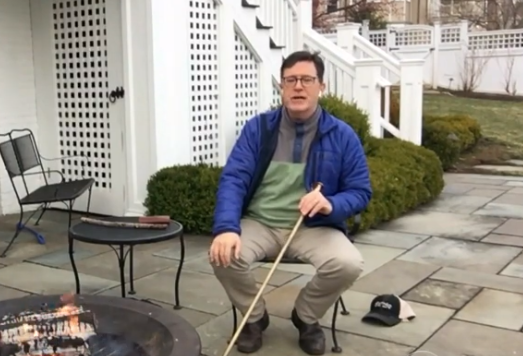 Stephen Colbert decided to continue producing a stripped down form of his late night comedy show in the midst of the coronavirus quarantine, though it wasn’t just the production quality that appeared to be suffering, but the material itself.

Maybe that’s just because we’re tired of lame jokes from the bottom of the far left political barrel. Colbert’s focus for The Late Show: Backporch Edition was again torching the President’s coronavirus response and press briefings, particularly blasting Trump for his use of the phrase “Chinese virus.” Colbert called Trump stating the obvious a “very racist term.”

On a side note, doesn’t Colbert yelling at the camera from his back porch make it seem like he’s taking Trump’s recommendations more seriously than he’d have us believe?

Sitting in front of a firepit, Colbert began his monologue: “Clearly this virus is a PR disaster for Donald Trump, but at today’s coronavirus press conference, Steve Mnuchin had a solution: free money!”

Colbert’s video editor was still on the case, apparently, as there was the clip of Mnuchin’s statement. Again the humor wasn’t there, though. Colbert followed through with the punchline, “Cash for Americans, and because it’s Trump, I’m guessing it will be $130,000 for everyone to just say they’re healthy.” Bah dum tss, right? Uh, let’s just say the lack of studio audience laughter made us forget to laugh at that gem.

The next joke was aimed at Trump’s projection of confidence in beating back the coronavirus. The clip featured Trump claiming, “We’re going to win” and Colbert couldn’t resist responding, “Y’know, when Trump said we were going to be sick of winning, I didn’t know he meant that literally.” Steve, could you not afford one other writer with you in quarantine?

Colbert then got even dumber, skewering a clip of Trump talking about how fast food companies were faring during quarantine and quipping, “Trump knows fast food is crucial during a pandemic, that’s why he started hoarding it a year ago.” The host referenced the infamous photo of Trump’s fast food feast prepared for the 2019 NCAA Division I College Football Playoff Champions.

Finally, Colbert moved into the real political territory, calling Trump’s use of the phrase “Chinese Virus” (since it came from Wuhan, China) a “dog whistle.” Colbert stated, “Trump’s been tooting his dog whistle pretty hard by calling it ‘Chinese virus’ and he defended it at today’s press conference.”

In the subsequent clip, Trump defended using the phrase: “I have to call it where it came from. It did come from China, so I think it’s a very accurate term.” The willfully ignorant comedian responded, “No, it’s not! It’s a very racist term. If you care so much about naming things where they came from, then call it bat bite fever.”

Oh, come on, Stephen, not all bats are diseased, bigot!