Where Will Media Stocks Head in 2006?

By | January 1, 2006 1:33 PM EST
Will "old media's" finances continue to erode in 2006, or will upstart media companies finally get their comeuppance? I'm guessing it will be some combination of the two. Over at the Hollywood Reporter, Paul Bond thinks that after three straight years of declines, big media stocks will reverse course.

Ring in the gloom year!

Imagine you're a guest on the Today show on New Year's Day, and the host asks you to predict the top stories for the year to come.

What are the odds you choose as your two top stories for 2006: job-loss anxiety among white-collar workers, and white-collar crime?

Yet that is precisely what Marcus Mabry, Newsweek's Chief of Correspondents [pictured here], did in his just-completed interview with host Lester Holt.

To welcome in 2006, I thought it might be fun (as one radio host suggested) to take a look back at all of our Quotes of the Year from the Best of Notable Quotables of the Year, all the worst, dumbest, and most bizarre quotes of each particular year. First, a look at the four years of President Bush Number One. I can now confirm what I've long suspected: Neal Gabler and I inhabit different planets.

I inhabit the one in which the MSM coverage of the Iraqi war is a virtually-uninterrupted drumbeat of the negative.  From headline coverage of every IED that goes off, to the beatification of Cindy Sheehan, the liberal media's treatment of the war has been decidedly downbeat.

Judge Issuing Letterman Restraining Order Is a What?

By Mike Bates | December 31, 2005 11:51 AM EST
Much coverage has been accorded the woman who was issued a restraining order by Santa Fe District Court Judge Daniel Sanchez against talk-show host David Letterman. Typical was Keith Olbermann on Countdown's December 27th program:

"Colleen Nestler of Santa Fe, New Mexico, somehow managed to get a temporary restraining order issued against Letterman last week saying he had to stay at least three yards from her at all times. But the judge who granted that order today reversed himself, lifted it.

Henican Forgets There's a War On - Pinkerton Reminds Him

In their heart of hearts, do the liberal media believe we are at war? The answer is a resounding 'no', judging by liberal Newsday columnist Ellis Henican's performance on this morning's Fox & Friends Weekend. Thankfully, fellow Newsday columnist Jim Pinkerton was there to remind his colleague of some cold, hard facts.

Without identifying David Cole as the “legal affairs correspondent” for the far-left magazine The Nation, Friday’s World News Tonight on ABC featured his denigration of the probe into who leaked the secret eavesdropping story to the New York Times and his expert declaration that “the President of the United States violated a clear criminal prohibition on warrantless wiretapping.” Reporter Pierre Thomas described Cole as a “constitutional scholar” and the on-screen graphic read: "Prof Georgetown Univ Law School." Cole’s latest piece for The Nation calls Bush an “Emperor.” Thomas did balance Cole with former federal prosecutor David Schertler, but the former homicide prosecutor has no equivalent ties to right-wing politics and did not make a declaration about which side of the dispute is correct.

Substitute anchor Claire Shipman set up the story by mis-characterizing the surveillance of international contacts with those linked to terrorists: "Now to the administration's secret eavesdropping program in which the government monitors domestic conversations without a warrant.” Thomas highlighted how “some constitutional scholars say the NSA spying is illegal and that the New York Times article disclosing it is a public service. They say this investigation is retribution." Cole argued: “On the face of it, there were two crimes committed here. One, a leak by a government official, something that happens almost every day in Washington. The other, the President of the United States violated a clear criminal prohibition on warrantless wiretapping. Yet which one is being investigated?" (More from Cole in The Nation, as well as a full transcript of the ABC story, follows.)

The bogus story of "Pope Joan" was not the only fiction that ABC and Diane Sawyer tried to hustle on the American public in last night's Primetime (Thursday December 29, 2005). In trying to convey the environment of ninth-century Europe, host Diane Sawyer and a guest, Donna Cross (author of Pope Joan), promulgated the debunked feminist myth that the phrase "rule of thumb" originated from a centuries-old law about wifebeating. The popular hoax purports that a man was once allowed to clobber a woman as long as the club was no wider than his thumb.

In her much-acclaimed 1994 book, Who Stole Feminism?, writer Christina Hoff-Sommers shreds the "rule of thumb" myth.

"The 'rule of thumb' ... turns out to be an excellent example of what may be called a feminist fiction ...

"That the phrase did not even originate in legal practice could have been ascertained by any fact-checker who took the trouble to look it up in the Oxford English Dictionary, which notes that the term has been used metaphorically for at least three hundred years to refer to any method of measurement or technique of estimation derived from experience rather than science.

Cindy Sheehan, Clift’s “Person of the Year” for Giving Bush a “Vacation from Hell” 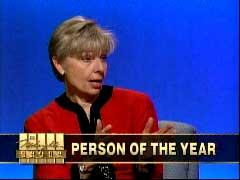 Catching up with an item from last week, on the Christmas weekend edition of the McLaughlin Group which featured the show’s annual “Year-End Awards,” Newsweek’s Eleanor Clift named Cindy Sheehan her “Person of the Year.” Clift championed Sheehan’s negative impact on President Bush: “I give it to Cindy Sheehan, the Gold Star mother who gave the President a vacation from Hell and brought the war home in a way that it hadn’t been before and set

By Lyford Beverage | December 30, 2005 5:11 PM EST
One of the central political issues facing the American People over the past few years, and certain to be one in the next few, is the issue over whether or not governments are required to recognize same-sex relationships in the same manner that marriages are recognized. Ground-zero in that debate, and one of the places where that discussion has joined arm-in-arm with the debate over judicial activism, is the Commonwealth of Massachusetts. In November of 2003, in the case of Goodridge v.

The Chairman Mao book requesting student speaks out to the public through the duped newspaper that is valiantly protecting his fragile identity.

"The fact is that my being panicked about this hole (sic) event led me to unfortunately prop up my story (i.e., fabricate it), for that I have to apologize to you and to my professors. I have spoken to my family about the whole issue and the fact is that they were understandibly (sic) angry. My name has been dishonored within my family and so I will spend the rest of the winter trying to restore even a little bit of it back, at least."

Apparently there is no writing requirement at UMass Dartmouth. As for your dishonored name, you might want to free up the spring too. They're really doing fabulous work with the kids at Darmouth. I'm sure all the doors swing both ways, if my Far Side friends know what I'm talking about.

The newspaper used this for the headline: "When a story is too good to be true" apparently admitting that they wanted Bush to have library stalking gestapo.

The article describes how it happened, too long to reprint here but worth a read if you want to laugh. The reporter didn't even have confirmation of the story from the two main subjects -- the student or Homeland Security -- yet they ran the story anyway. It's the kind of reporting you'd expect from a couple of kids with mom's typewriter.

Yes it’s the Friday before New Year's. Yes there is not much in the way of news. But CBS was so desperate to fill time this morning, they brought on an astrologer to predict the future. Needless to say, she predicted a bad year in 2006 for both President Bush and the economy. Would it really have been on CBS had she done otherwise?