Satire has its limits. When it comes to dealing with national tragedies, it's best to respectfully stay out of it.

Weekly French magazine Charlie Hebdo published its latest issue on August 29. On the cover was a cartoon which depicted Nazi flags and the bodies of saluting Nazis drowning in a flood. The caption read: “Dieu Existe! Il A Noye Tous Les Neo Nazis Du Texas!” 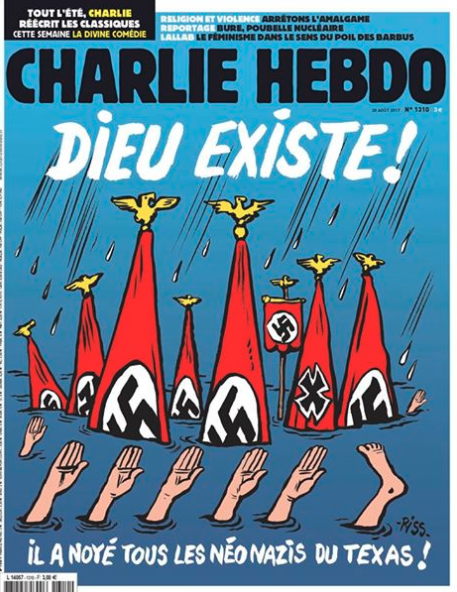 For those who don’t speak French, that translates to: “God Exists! He Drowned All Neo Nazis of Texas!”

Yep. You read that right. Not only that, but the outlet placed the cartoon on both its magazine cover and its Facebook profile picture.The atheist publication that came under attack by Muslim extremists in 2015 for drawing satirical images of Mohammed is now mocking Texans in their time of need. It was drawn by Laurent “Riss” Sourisseau, who in 2015 was wounded in that same attack.

On the international front, the magazine has also recently been under fire for its insensitive magazine cover depicting the victims of the Barcelona attack.

The United States stood with France during the terrorist attack of 2015 that was spurred by the Mohammed Charlie Hebdo cartoon. It’s sad to see that, at the very least, the publication does not return the courtesy.