We must thank Washington Post political reporter Shailagh Murray for the laugh-out-loud paragraph of the week, the second paragraph of her front-page Friday profile of Sen. Lincoln Chafee, a “Republican On The Edge”: You really couldn’t script this any better: Three prominent liberal media members (the third is a player to be named later!) challenging another over what Democrats stand for. And, the beauty is that these folks are actually blogging their disgust with one another for all to read. Go get some popcorn, because this is literally a three ring circus!

Our story begins on Tuesday, April 11 at a breakfast sponsored by HBO and the Council on Foreign Relations. Early the following morning, the Nation’s Eric Alterman posted at his TIME blog his discontent with something TIME’s Joe Klein said at the affair: “It was a useful discussion with many useful tributaries and give and take with the audience and we all felt better for it. That is right up until the very last moment when, after someone brought up the question of the whether the Democrats will be able to present an effective alternative to Bush in the next election, Joe Klein shouted out, ‘Well they won’t if their message is that they hate America—which is what has been the message of the liberal wing of the party for the past twenty years.’”

Seems like a sound and impartial observation by Klein. However, Alterman wasn’t pleased: “Excuse me, but I think this is worth some attention. It’s not about Klein per se, who after all, is best known to most Americans as the guy who lost his job at both Newsweek and CBS News for purposely misleading editors, readers and viewers in order to increase his own personal profit as the allegedly ‘anonymous’ author of ‘Primary Colors.’” Get the sense that this is going to get good? It does:

By Greg Sheffield | April 15, 2006 6:50 PM EDT
An outraged liberal tried to connect a fictional neo-Nazi group, the "Grey Wolves," to a rally of the Minutemen United, an Ohio-based Christian group that planned to rally in Danbury, Conn.

The man, who calls himself both Rick Renage and Rick Regado, emailed a reporter for the Danbury News-Times that three busloads of Grey Wolves would show up wearing "black pants, black boots, red sox with black jackets and the swastika branded on the back." The purpose of his email was to tarnish the reputation of those rallying, and hopefully diminish their influence.

Just when you thought Hollywood had reached the limit of things they could blame on President Bush, along comes the director of “Hostel”, Eli Roth. Roth was a guest on Friday’s “Your World with Neil Cavuto”. 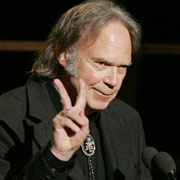 According to Editor & Publisher (hat tip to Drudge), rock singer Neil Young recently recorded a song entitled “Impeach the President” which is to be included on his new CD. Apparently, there have been rumors on the Internet that Young was working on an anti-Bush album for some time. These were somewhat confirmed by a blog entry made at Last Turn Left B4 Hooterville on April 7. The blog is the work of Alicia Morgan, a Sherman Oaks, California, musician with a devout hatred of the current administration (emphasis mine):

“On Wednesday, I was at work when I got a call for a Neil Young session the next day. Needless to say, I was excited about it - Neil Young is one of my musical heroes. When my husband and I got to Capitol, we found 98 other singers, a collection of L.A.'s finest. All I knew was that we were singing on a new Neil Young record, but when the lyrics we were supposed to sing flashed on the giant screen, a roar went up from the choir. I'm not going to give the whole thing away, but the first line of one of the songs was ‘Let's impeach the President for lyin'!’"

Isn’t that special? Nothing brings out the music in me more than a good impeachment. Mercilessly, Morgan continued: 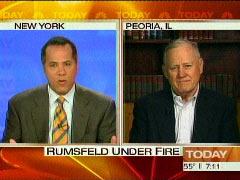 Hard-left anti-war reporter Seymour Hersh, who tried so hard in 2004 to get President Bush defeated with the Abu Ghraib scandal, and was given many media opportunities to make his case, had another great week in the media this week with his New Yorker article suggesting Bush wanted to drop bunker-busting nukes on Iranian nuclear sites. As usual, the article was larded with anonymous sources that no one can check or evaluate for political motives.

Tim Vincent, the Britain-born New York correspondent for Access Hollywood, sported a hammer and sickle T-shirt on Friday's show as he stood in front of NBC's Rockefeller Plaza complex and introduced a piece on American Dreamz, the movie takeoff of American Idol. Though he wore a jacket over the red shirt with the symbol of the regime which murdered tens of millions and oppressed hundreds of millions more for decades, a gold hammer and sickle was clearly visible inside a red star. The gold-outlined red star, sans the hammer and sickle, matches the Soviet's Red Army emblem. I don't get it. Is this some kind of cool statement with thirtysomethings, elite New Yorkers or Brits? Or is it just part of some promotion for an upcoming movie? Imagine the proper outrage that would explode if he had worn a Nazi swastika. I put "hammer and sickle t-shirt" into the Copernic search engine and though I did not find the exact shirt adorned by Vincent, I was shocked to find a

couple of dozen sites which sell hammer and sickle T-shirts -- and mugs too.

Vincent, a veteran of the BBC as detailed in his posted bio, is also a contributor of celebrity news for NBC's Today show. Access Hollywood is produced by NBC at its Burbank facility and is carried in the early evening by all the NBC-owned stations -- and by affiliates of NBC and other networks in other cities. The controversy over Comedy Central's decision to censor its show "South Park" continues to heat up. Late Thursday, the network issued a statement admitting that it did refuse to run a scene which featured a cartoon depiction of the Muslim prophet Muhammed.

"In light of recent world events, we feel we made the right decision," the cable channel said.

That decision has sparked howls of protest from fans and critics, making it the most-searched for term on the blog search engine Technorati (ht Michelle Malkin).

The show's executive producer, Ann Garefino, confirmed that the network censored the scene, stating that she believed it did so out of "fear" of protests or violence.

"We were happy that they didn’t try to claim that it was because of religious tolerance," Garefino said in an interview with Volokh.com.

She was not aware of any particular threats being made against the show or Comedy Central had the deleted scene aired.

Demonstrating that for the press corps “maverick” means going to the left -- or at least that you're a conservative-basher -- ABC's World News Tonight on Friday aired a story fretting about how the media's favorite Republican has agreed to give the commencement address at Jerry Falwell's Liberty University. “During his 2000 campaign, McCain gathered support as a straight-talking maverick by attacking some members of his party's base,” anchor Elizabeth Vargas recalled while viewers saw "Right Turn?" beneath a picture of McCain. She then warned: “Now it appears he's on a very different course.” Reporter Dan Harris fondly remembered how in 2000 “straight talk included taking on powerful Christian conservatives like Jerry Falwell, whom he called an 'agent of intolerance.'" Harris then repeatedly pushed McCain to denounce Falwell: "Let me just press you on this. Do you think he's still an 'agent of intolerance'?...So do you take back your statement about him being an 'agent of intolerance'?"

Harris helpfully reminded viewers that "since 2000, Falwell has said Jews can't go to heaven unless they accept Christ, and on The 700 Club, that gays and feminists bore responsibility for 9/11." Noting how analysts say McCain is trying to “repair relations with the religious right” before he launches another presidential bid, Harris cautioned McCain: “Politicians often try to appeal to the party's base, but for McCain, doing so could jeopardize his reputation for being a different kind of politician.” Of course, given the disrepute the media and many Republicans hold for Falwell, you could argue that reaching out to him is a “maverick” move for McCain. But you're only a “maverick” to journalists when you undermine a conservative or boost a liberal position. (Transcript follows.) 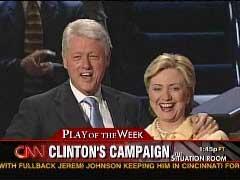 Three days after CNN's Wolf Blitzer wondered, on The Situation Room, “if Bill Clinton could run for President again, would he be re-elected?" and Jack Cafferty excitedly agreed “he probably would be, in a heartbeat” since "Clinton would be the answer to a prayer” for Democrats, CNN's Bill Schneider on Friday awarded Bill Clinton with his “Political Play of the Week.” Schneider touted how “in a series of appearances this week, the fo

By Dan Gainor | April 14, 2006 2:00 PM EDT
World News Tonight provides a forum for one mans complaint about being gouged.

By Ken Shepherd | April 14, 2006 2:00 PM EDT
Paper blames rich for crowding out middle class residents even though government owns 97 percent of the land.