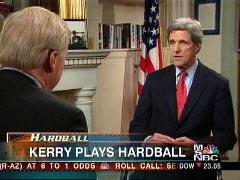 The graphic claims 'Kerry Plays Hardball', but it was all slow-pitch softball this evening for the junior senator from Massachusetts. After feeding Kerry a number of leading questions letting him tee off on the way Pres. Bush allegedly misled the country into war, talk turned to exit strategies.

Matthews: "Senator, you have a plan, pretty hard, about how we can deal with getting out of Iraq." 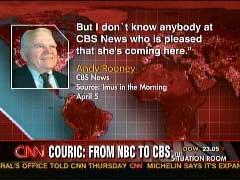 CBS Evening News anchor Bob Schieffer praised Katie Couric’s selection as his successor in an interview with CNN’s Wolf Blitzer aired during the 4pm EDT hour, and again in the 7pm EDT hour, of Thursday's The Situation Room.

If two women squabbling is a “cat fight,” would two men going after one another be a “dog fight?” Regardless, The Washington Post’s Bob “Watergate” Woodward is in the middle of quite a war of words with The Nation’s David “Tax the Rich” Corn that, of course, goes counter to their pacifistic proclivities. The melee began last Friday when Corn published a blog piece suggesting that Woodward’s book “Plan of Attack” did not accurately depict a January 2003 conversation at the White House between President Bush and British Prime Minister Tony Blair. On April 4, Woodward struck back. In a letter published at Corn’s blog at The Nation, Woodward began:

“I was genuinely shocked to read your recent column "Woodward and Reality."  The column is thoroughly dishonest and represents another low for journalism.  Apparently facts don't matter to you if you think you can score a point.”

Of course, this could be said of most antique media reporting. Regardless, round one went to Woodward.  After going through a point-by-point analysis of where Corn was wrong in his assertions, Woodward questioned if Corn even read “Plan of Attack”:

While good conservatives and libertarians can agree to disagree amongst ourselves on just how to reform immigration, there's at least a consensus that more taxes and redistributionary spending are NOT part of the solution.

Which is why, I suppose, we need the infinite wisdom of The Washington Post editorial board to tell us otherwise:

At NYT, Race is Newsworthy--Sometimes

On April 3, the New York Times reported (Man Hit by Car; Witnesses Say He Was Chased) on a young man who was seriously hurt (and later died) after darting into a busy Harlem intersection. Witnesses to the incident, according to the Times' account, said it appeared the victim was being chased by several young men. No reference to the race of the victim or the young men pursuing him was mentioned.

Meredith Vieira, one of the hosts on ABC's daytime show The View, who announced on Thursday's program that she has agreed to replace Katie Couric as co-host of NBC's Today, marched in an anti-Iraq war protest back in August of 2004. On the Monday, August 30, 2004 edition of The View, the former CBS 60 Minutes reporter told viewers that she attended the anti-Bush protest held in New York City on the Sunday before the Republican convention opened, insisting: "I didn't go anti-Bush or pro-Kerry. I'm still so upset about this war and I'm so proud I live in a country where you can protest." She showed a photo of herself marching with her pre-teen daughter and her husband, Richard, who was the senior political producer at CBS News for most of the 1980s. Behind her in the photo: A protest sign featuring a “W,” for George W. Bush, with a slash through it.

Earlier in 2004, she declared of the Iraq war: "Everything's been built on lies. Everything! I mean the entire pretext for war." And, with war impending in March of 2003, Vieira argued that anti-war protests "should be consistent and repeated every day, I believe." On other episodes of The View Vieira has also made clear her opposition to the death penalty and when guest Ann Coulter charged that “liberals hate America,” Vieira called that “stupid" and became defensive: “But some people wrap themselves in the flag -- I mean, that's what some liberals are against.” Then she charged: "Just like McCarthy: 'I'm just being patriotic.'"

As Katie Couric announces she is jumping from NBC’s “Today” show, which she’s co-hosted for 15 years, to the anchor slot of the “CBS Evening News,” Edward Wyatt gamely argues in Thursday’s Business Day how Couric actually has roots as a hard news reporter (“Coming Back to Hard News”) and carried those over to her Today show segments, which Wyatt repackages as “tough assignments.”

“But she has showed that she can handle tough assignments with aplomb and has been unafraid to take certain risks.”

Harry Smith Giddy as a Feminist Over Couric Joining CBS 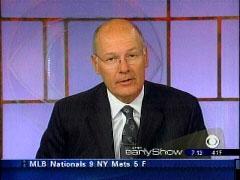 Yesterday it was made official, Katie Couric is leaving the "Today" show on NBC to anchor the "CBS Evening News." While some CBS employees have been less than welcoming -- Andy Rooney for example -- for the most part CBS reporters have been good soldiers in promoting the company line.

Comedy Central's hit show "South Park" just won a Peabody, the highest award given to TV shows. The most recent episode dealt with the controversy surrounding depictions of Mohammad.

The implosion of Air America continues as its CEO jumps ship. Brian Maloney at Radio Equalizer has the details.

After just over a year at the helm of financially troubled liberal radio network Air America, CEO Danny Goldberg is on his way out. Still unclear is who, if anyone, will replace him as top dog.

Damned if You Do? Couric Questions How To Get Illegals "To Do These Things?" 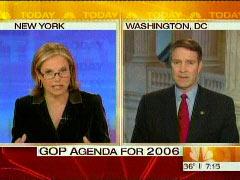 The quintessential item of conventional wisdom on immigration is the impracticality of deporting the estimated 11-12 million illegal aliens already in our country. Yet there are dissenters. Conservative columnist and former Reagan aide Jim Pinkerton has said "I think actually you could if you wanted to."

Michelle Malkin has updated the story on how NBC is planning to parade obvious Muslims around NASCAR races to see if those hayseeds at the races will demonstrate American discrimination against the Muslim people.

McKinney Abuses Anchors As If They Were Capitol Police

Congresswoman Cynthia McKinney appeared on CBS, CNN, and FNC on Wednesday morning to address charges she hit a Capitol Police officer in the chest with her cell phone when he tried to stop her as she tried to walk right past security screeners. Well, actually, she refused in all three interviews to address the basic facts of the fracas. In all three interviews, she forced in her talking points, that the kerfuffle was "much ado about a hairdo" and that 250 black officers sued the Capitol Police for racial discrimination.

Panel Agrees No Middle Ground in Iraq Coverage: Either Too Positive or Too Negative

By Greg Sheffield | April 6, 2006 12:14 AM EDT
Reuters organized a panel discussion between a blogger, journalists, and a U.S. military spokesman. They couldn't agree on much, except that the coverage of Iraq is either too positive or too negative.

A day after the Democratic legislature of Massachusetts passed a mandated health insurance plan, and tellingly the day of a front page New York Times story (“Massachusetts Sets Health Plan for Nearly All”) touting the bill which Republican Governor Mitt Romney plans to sign, all three broadcast network evening newscasts led Wednesday by championing the proposal and characterizing it as a national model. ABC and NBC provided critics with just a sentence while CBS ran a totally one-sided promotional story. ABC anchor Elizabeth Vargas teased: "Tonight, one state's revolutionary attempt to create universal health care. If a state can do it, why can't the country?" Vargas claimed: “Most people think medical costs are too high and would like a universal insurance system to cover everyone.” Reporter Nancy Weiner soon trumpeted: “Many experts say after years of failed attempts in several states, and by the federal government the Massachusetts version of universal health care, which stresses individual responsibility, could serve as a national model."

CBS Evening News anchor Russ Mitchell celebrated the government mandate, “Imagine this: Virtually everyone guaranteed health insurance coverage. It's happening in one state, and it could be a model for the rest.” Over on the NBC Nightly News, anchor Brian Williams dreamed: “Health insurance for everybody. Is it possible? Tonight, one state about to make it the law. If it works, will the same thing happen where you live?” He soon wondered: “If this works, why not the rest of the nation? It's been called 'mandatory health care,' 'universal health care,' and, while it has its critics, it's also being called a potential and revolutionary solution to a huge problem: the millions of uninsured Americans.” (Transcripts follow.)