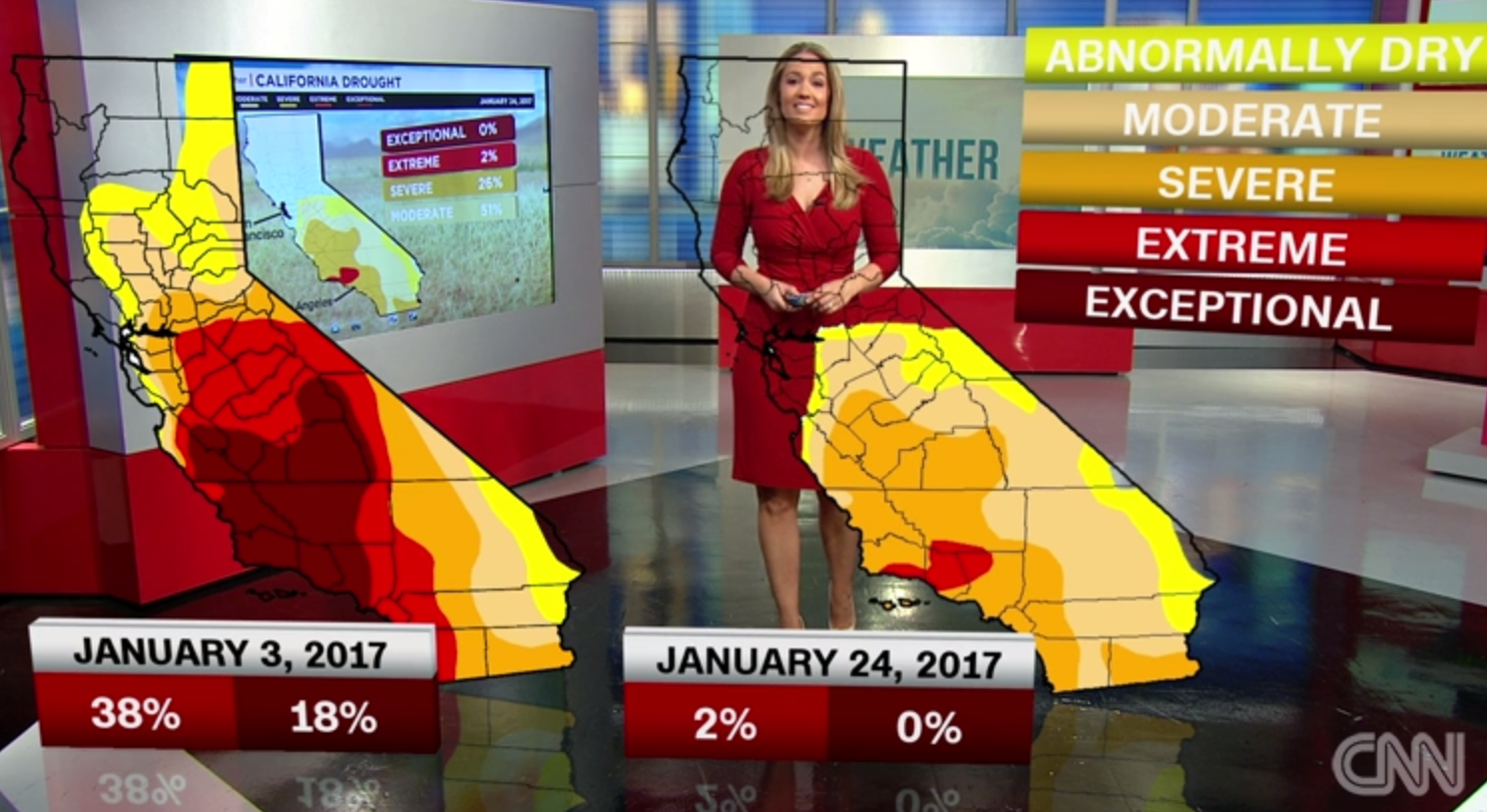 California’s “exceptional drought” isn’t exceptionally bad any more. Winter storms have been good for the state, pulling it out of the worst rating from the U.S. Drought Monitor. However, this “huge improvement” barely registered with the broadcast networks that had blamed “climate change” for the crisis.

CNN.com reported on Jan. 26, that “California’s drought is almost over.” For the first time in 36 months, no part of California was under “exceptional drought.” It also showed that only a small portion of the state still in “extreme drought,” but cautioned the drought is not “officially over” yet. But with nearly twice the normal amount of snowpack for the time of year, there were reasons for optimism.

NBC’s Today was the only network news show to mention the change in California’s drought conditions between Jan. 24, and Jan. 31, even though the three networks and many other media outlets had covered the drought often in the past. The broadcast networks had claimed it was unprecedented and “historic,” in spite of experts who refuted those claims. In 2015, the networks also totally ignored how environmental regulations worsened the California drought.

When the drought was at its worst, liberal media outlets blamed it on climate change and “global warming,” and many warned it would just keep getting worse. Wired magazine actually warned in May 2016, “California’s Drought Is Probably Forever” in spite of El Nino. ABC News correspondent Neal Karlinsky said there was “no end in sight” for the drought in July 2015. National Geographic online warned of an even worse drought than the state was already experiencing.

“Worst Drought in 1,000 Years Predicted for American West,” the headline shouted. The prediction was that global warming would cause an “historic” “megadrought” by 2,100.

NBC News.com had previously reported that the drought was already that bad: On Dec. 6, 2014, the site called California’s drought the “worst in 1,200 years, with accumulated moisture deficits the worst ever.”

The broadcast evening news shows aired 53 stories about the California drought in early 2014 and more than 60 percent of them portrayed it as “historic” or record-breaking. But a NOAA scientist slammed that idea in an editorial saying the drought “resembles” 1970s droughts.

Later that year, a report by federal scientists blamed “natural cycles” and “sea surface temperatures” for three years of drought in California. Still, the broadcast network news ignored that report when it came out. That year, the networks had repeatedly called the drought “historic” and the “worst” on record and connected it to climate change.”

But the report stated, "It's important to note that California's drought, while extreme, is not an uncommon occurrence for the state. In fact, multi-year droughts appear regularly in the state's climate record, and it's a safe bet that a similar event will happen again. Thus, preparedness is key," said Richard Seager, the lead author and professor with Columbia University's Lamont Doherty Earth Observatory.

Data from the Western Regional Climate Center also showed that there were at least two drier years than 2014 in the past 120 years, according to a post on Watts Up With That.

The drought continued and so did network coverage. In 2015, they aired 188 stories or news briefs about the drought. But none of them investigated or reported the environmental regulations which were exacerbating the state’s water crisis.

The drought was also cited in network reports about extreme weather and “weather whiplash,” as the media hyped the supposed effects of manmade global warming.