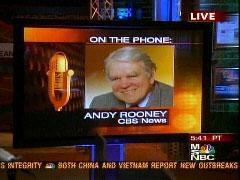 On Friday morning’s Imus in the Morning program on MSNBC, Andy Rooney, from CBS, interrupted the I-Man’s positive description of Democratic Congressman Harold Ford, Jr., to state that he doesn’t like the term "African-American" and considered "Negro" to be "a perfectly good word." 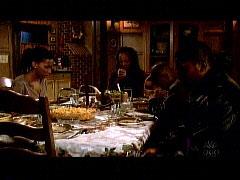 We interrupt our regular programming for a left-wing blast at American foreign policy.

Jimmy Carter Condemns Abortion -- Will CBS Also Care About His Comments This Time?

A bit of a stunner from this morning's Washington Times: "Former President Jimmy Carter yesterday condemned all abortions and chastised his party for its intolerance of candidates and nominees who oppose abortion. 'I never have felt that any abortion should be committed -- I think each abortion is the result of a series of errors,' he told reporters over breakfast at the Ritz-Carlton Hotel, while across town Senate Democrats deliberated whether to filibuster the nomination of Judge Samuel A. Alito Jr.

By Bob Owens | November 4, 2005 7:07 AM EST
To listen to the way it is spun in the Washington Post and crowd on the left, you'd think that President Bush's "all time low" job approval rating was the end of the world:

There is no headline in the Washington Post today to tell readers that Virginia Lt. Gov. Tim Kaine has been endorsed for Governor by one Michael Schiavo, the man who campaigned for years to get his wife's feeding tube pulled. It's buried at the end of an article on page B-4.

By Tom Segel | November 4, 2005 1:20 AM EST
The Bush administration created a journalistic shield to stall investigation into the CIA leak case until after the 2004 election. So proclaims the Washington Post in a column by E. J. Dionne Jr. on Tuesday, November 1, 2005.

In tomorrow’s (Friday) Washington Post is a front page article entitled “Youths in Rural U.S. are Drawn to Military.” The title is correct. The lede, however, is a single sentence that displays for all to see the bias of the Post against the war and against its volunteer military. It reads:

If Al Franken Sues, Will the MSM Cover It?

A couple of years ago, when Fox News sued Al Franken over the use of the trademark "Fair and Balanced" on his book cover, many in the MSM were happy to play it up big time. Franken's Lies book shot to #1 with the help of all the free publicity.

As NewsBusters has been reporting the past 24 hours here, here, and here, CBS News released a poll yesterday depicting President Bush’s declining job approval numbers that were based on a sample that was in no way reflective of the country’s population. Just hours ago, some new poll numbers were released by the Washington Post and ABC News, and they too have over-sampled Democrats and Independents.

Filling up at the pump is costing less and less each day – 45 cents per gallon less since its post Rita peak of $2.94 as of October 30. Despite that huge drop, all three broadcast networks have reported on rising or high gas prices four times as often as falling prices. Here are some of the key results:

Mayor Calls for Cruel Punishment - Will There Be Outrage?

Las Vegas Mayor Oscar Goodman, an outspoken Democrat, seems to catch lots of attention, locally. Will it stay that way? The Democrats in Nevada want him to run for governor, to replace their Republican Governor, Kenny Guinn. According the Las Vegas Sun, 5 October 2005:

But some close to him have said the mayor is seriously considering a run, and the latest poll suggests he's the best hope for the Democrats.

In a Thursday CBS Evening News story on how Karl Rove is a “distraction” in the West Wing, Gloria Borger cited how “a new CBS News poll shows that only 39 percent of Americans say that President Bush has more honesty and integrity than most people in public life, down eleven points since early last year.” But that number comes from the same poll, it turns out, that CBS News skewed by weighing it to undercount Republicans and over-count independents. My Wednesday NewsBusters item recounted how on that night's Evening News, over side-by-side head-shot videos on screen of Richard Nixon and George W. Bush, with Bush's 35 percent approval, in the CBS News poll, below his image and Gallup's 27 percent finding beneath the shot of Nixon, John Roberts pointed out how “the only recent President lower at this point in their second term was Richard Nixon.”

Subsequently, NewsBusters' Noel Sheppard picked up on how “Tom Bevan of Real Clear Politics posted an analysis of this poll’s methodology at his blog last evening. What his figures show is that CBS polled 46% more Democrats in its weighted sample than Republicans.” In short, CBS polled 259 Republicans, but weighted the sample to count for only 223, or 24 percent of the total; they surveyed 326 Democrats and held that number so they represented 35 percent of those polled; and independents moved from 351 respondents to a weighted 388 for 41 percent of the sample. Sheppard explained: “To put these numbers in proper perspective, according to the November 2004 exit polls, the nation’s current party affiliation is 37 percent Democrats, 37 percent Republicans, and 26 percent independents. As such, the polling agency involved in this result fell 36 percent short in sampling Republicans while over-sampling independents by 59 percent.” (More on Brit Hume's "Grapevine" item on the poll, weighting and the Borger story in full, follows.)

Eight days ago, Steve Gilliard, a liberal blogger critical of Lt. Governor Michael Steele (R-MD), a black conservative seeking the Republican senatorial nomination in his state, altered a photograph of the candidate to portray a minstrel in blackface, and accompanied it with the caption, "I's Simple Sambo and I's running for the Big House."

[Gilliard has since removed his original artwork, but blogger Charles Bird saved the image before Gilliard took it down and documents it on redstate.org, a conservative team blog.]

Understandably, this set off a storm in the blogosphere, with many conservative and some liberal bloggers decrying the racist post as beyond the pale. As I blogged last week, even the Washington Post reported it in their Metro section. Well, the story has evolved a bit more. While the Maryland Democratic Party also issued a statement criticizing it, lately, some elected Maryland Democrats including a white Democrat vying for Governor, have excused the attack on Steele as valid owing to Steele's affiliation with the GOP.

So far there has been no coverage of this new development in the mainstream broadcast media.